Scientists at the UCSF-affiliated Gladstone Institutes today are announcing a research breakthrough in mice that one day may help doctors restore hearts damaged by heart attacks — by converting scar-forming cardiac cells into beating heart muscle. 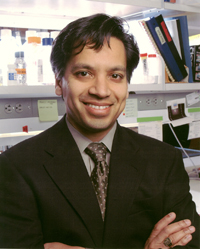 These scientists previously transformed such cells into cardiac muscle-like cells in petri dishes. But Gladstone postdoctoral scholar Li Qian, PhD, along with researchers in the laboratory of Deepak Srivastava, MD, has now accomplished this transformation in living animals — and with even greater success. The results, which may have broad human-health implications, are described in the latest issue of Nature, available online today.

Cardiovascular disease is the world’s leading cause of death. Annually in the United States alone, the nearly 1 million Americans who survive a heart attack are left with failing hearts that can no longer beat at full capacity.

“The damage from a heart attack is typically permanent because heart-muscle cells — deprived of oxygen during the attack — die and scar tissue forms,” said Srivastava, a UCSF professor who directs cardiovascular and stem cell research at Gladstone, an independent and nonprofit biomedical-research institution. “But our experiments in mice are a proof of concept that we can reprogram non-beating cells directly into fully functional, beating heart cells — offering an innovative and less invasive way to restore heart function after a heart attack.”

In laboratory experiments with mice that had experienced a heart attack, Qian and Srivastava delivered three genes that normally guide embryonic heart development — together known as GMT — directly into the damaged region. Within a month, non-beating cells that normally form scar tissue transformed into beating heart-muscle cells. Within three months, the hearts were beating even stronger and pumping more blood.

“These findings could have a significant impact on heart-failure patients—whose damaged hearts make it difficult for them to engage in normal activities like walking up a flight of stairs,” said Qian, who is also a California Institute for Regenerative Medicine postdoctoral scholar and a Roddenberry Fellow. “This research may result in a much-needed alternative to heart transplants — for which donors are extremely limited. And because we are reprogramming cells directly in the heart, we eliminate the need to surgically implant cells that were created in a petri dish.”

“Our next goal is to replicate these experiments and test their safety in larger mammals, such as pigs, before considering clinical trials in humans,” added Srivastava. “We hope that our research will lay the foundation for initiating cardiac repair soon after a heart attack — perhaps even when the patient arrives in the emergency room.”

This research builds on the groundbreaking cell-reprogramming work of another Gladstone scientist and UCSF professor of anatomy, Shinya Yamanaka, MD, PhD. Yamanaka's 2007 discovery of a way to turn adult human skin cells into cells that act like embryonic stem cells has radically advanced the fields of cell biology and stem cell research.

But these new Gladstone experiments go further by both completing the experiments directly in live hearts and by employing a technique called “direct reprogramming.” Direct reprogramming could revolutionize the field of regenerative medicine, as it lets scientists transform one adult cell type into another without first having to revert back to the stem cell state. In the future, Gladstone scientists hope to use direct reprogramming not only to treat heart failure, but also for spinal cord injury and devastating illnesses such as Alzheimer’s and Parkinson’s disease.

Other scientists who participated in this research at Gladstone include Yu Huang, MD, PhD, Ian Spencer, PhD, Amy Foley, Vasanth Vedantham MD, PhD, Lei Liu and Ji-dong Fu, PhD. Funding for this research came from a wide variety of sources, including the California Institute for Regenerative Medicine, the William H. Younger Foundation, The Roddenberry Foundation and the National Heart, Lung and Blood Institute.

The UCSF-affiliated Gladstone is an independent and nonprofit biomedical-research organization dedicated to accelerating the pace of scientific discovery and innovation to prevent, treat and cure cardiovascular, viral and neurological diseases.