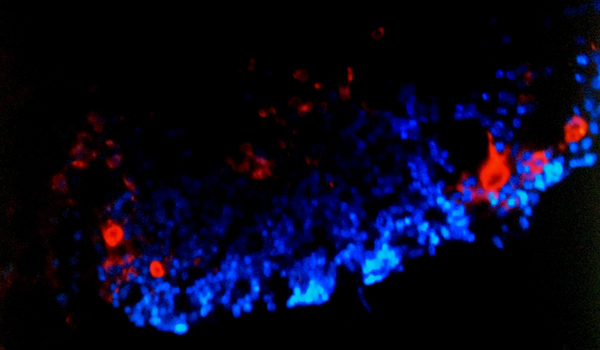 Cardiac stem cells, pictured here, give hope to patients who have suffered a heart attack.

In the investigation, reported online in the journal PLoS ONE, UCSF researchers isolated and characterized a novel type of cardiac stem cell from the heart tissue of middle-aged mice following a heart attack. 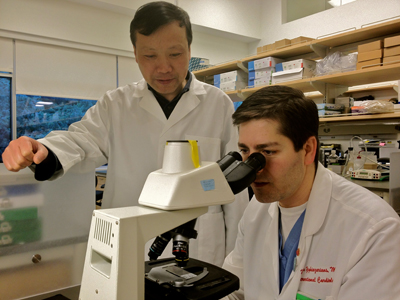 Then, in one experiment, they placed the cells in the culture dish and showed they had the ability to differentiate into cardiomyocytes, or “beating heart cells,” as well as endothelial cells and smooth muscle cells, all of which make up the heart.

In another, they made copies, or “clones,” of the cells and engrafted them in the tissue of other mice of the same genetic background who also had experienced heart attacks. The cells induced angiogenesis, or blood vessel growth, or differentiated, or specialized, into endothelial and smooth muscle cells, improving cardiac function.

“These findings are very exciting,” said first author Jianqin Ye, PhD, MD, senior scientist at UCSF’s Translational Cardiac Stem Cell Program. First, “we showed that we can isolate these cells from the heart of middle-aged animals, even after a heart attack.” Second, he said, “we determined that we can return these cells to the animals to induce repair.”

Importantly, the stem cells were identified and isolated in all four chambers of the heart, potentially making it possible to isolate them from patients’ hearts by doing right ventricular biopsies, said Ye. This procedure is “the safest way of obtaining cells from the heart of live patients, and is relatively easy to perform,” he said.

“The finding extends the current knowledge in the field of native cardiac progenitor cell therapy,” said senior author Yerem Yeghiazarians, MD, director of UCSF’s Translational Cardiac Stem Cell Program and an associate professor at the UCSF Division of Cardiology. “Most of the previous research has focused on a different subset of cardiac progenitor cells. These novel cardiac precursor cells appear to have great therapeutic potential.”

The hope, he said, is that patients who have severe heart failure after a heart attack or have cardiomyopathy would be able to be treated with their own cardiac stem cells to improve the overall health and function of the heart. Because the cells would have come from the patients, themselves, there would be no concern of cell rejection after therapy.

The cells, known as Sca-1+ stem enriched in Islet (Isl-1) expressing cardiac precursors, play a major role in cardiac development. Until now, most of the research has focused on a different subset of cardiac progenitor, or early stage, cells known as, c-kit cells.

The Sca-1+ cells, like the c-kit cells, are located within a larger clump of cells called cardiospheres.

The UCSF researchers used special culture techniques and isolated Sca-1+ cells enriched in the Isl-1expressing cells, which are believed to be instrumental in the heart’s development. Since Isl-1 is expressed in the cell nucleus, it has been difficult to isolate them but the new technique enriches for this cell population.

The findings suggest a potential treatment strategy, said Yeghiazarians. “Heart disease, including heart attack and heart failure, is the number one killer in advanced countries. It would be a huge advance if we could decrease repeat hospitalizations, improve the quality of life and increase survival.” More studies are being planned to address these issues in the future.

An estimated 785,000 Americans will have a new heart attack this year, and 470,000 who will have a recurrent attack. Heart disease remains the number one killer in the United States, accounting for one out of every three deaths, according to the American Heart Association.

Medical costs of cardiovascular disease are projected to triple from $272.5 billion to $818.1 billion between now and 2030, according to a report published in the journal Circulation.

The study was supported by funds from the Wayne and Gladys Valley Foundation, the UCSF Cardiac Stem Cell Fund and the Harold Castle Foundation. 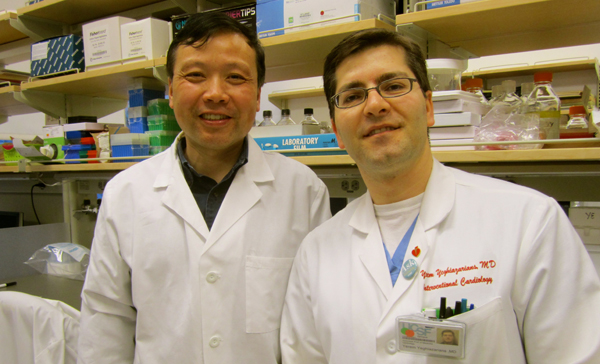 Photos of researchers by Leland Kim/UCSF