Paul Volberding, MD, one of the world's leading experts on treatment for patients infected with HIV, the AIDS virus, became the new director of the AIDS Research Institute (ARI) at UCSF on Feb. 13. 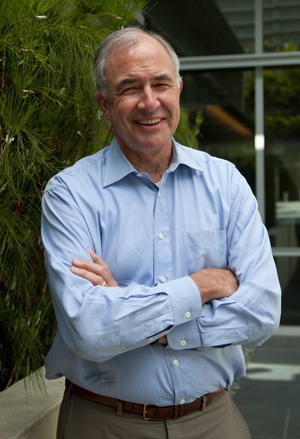 On the same date Volberding also became director of research for UCSF Global Health Sciences, a University of California program based at UCSF.

In a long UCSF career, Volberding early on became one of the first to become dedicated to caring for patients with AIDS in San Francisco, and he was a leader in early clinical trials to evaluate antiretroviral therapy in HIV infection. He has served for many years on the two major guidelines panels for antiretroviral therapy, addressing controversial issues such as the optimal timing of treatment in early HIV infection when no symptoms are evident.

To take on his new responsibilities Volberding has stepped down as chief of medical service at the UCSF-affiliated San Francisco Veterans Affairs Medical Center (SFVAMC) and as vice chair in the department of medicine. He will retain a clinical affiliation with the SFVAMC.

As ARI director Volberding now oversees the coordination and integration of all HIV/AIDS activities at UCSF. As director of research for Global Health Sciences, he is responsible for leading, coordinating, and integrating all of the program’s research activities.

Volberding will continue to serve as the co-director of the Center for AIDS Research (CFAR) at UCSF and the Gladstone Institute of Virology and Immunology, and as director of global health for the UCSF Clinical and Translational Science Institute (CTSI).

“The change allows me to devote time to what I have most loved to do academically throughout my career, and to try and increase the collaboration between two large communities,” Volberding said. “I see it as a really exciting opportunity. The nature of the HIV epidemic and research on HIV is increasingly global. There are excellent people doing work abroad in HIV, but also many people addressing other global public health issues.

“I look forward to working with Jaime Sepúlveda — whom I have known for many years — to see what these two communities can learn from one another, appreciating that there already is overlap between them.

Early in his UCSF career Volberding worked as a research fellow in the virology laboratory of Jay Levy, MD, later a co-discoverer of HIV. At UCSF-affiliated San Francisco General Hospital (SFGH) Volberding established a groundbreaking model for AIDS patient care, research and professional education — the Positive Health Program — and served as director for 20 years. 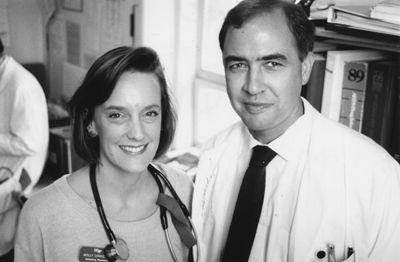 Paul Volberding, MD, and wife Molly Cooke, MD, worked together during the early days of the AIDS epidemic.

In 2001, Volberding moved to the SFVAMC, which he refers to as a model for high-quality, comprehensive patient care and for excellent educational programs. As chair of the SFVAMC NCIRE board of directors, Volberding has been an advocate of sharing medical data across systems to further research.

“There is a very deeply engrained medical records system at the VA, and it has become a model for demonstrating how that kind of data base can be used for medical research,” he said. A recent study led by SFVAMC researchers that uncovered potential side effects of tenofovir treatment of HIV is a prime example, Volberding said.

Volberding is married to another UCSF faculty member, Molly Cooke, MD, a professor of medicine and a leading medical educator at UCSF. Volberding and Cooke began battling HIV during the first days of the AIDS epidemic in San Francisco three decades ago, before the nature of the infection was even understood. While attaining leadership roles at UCSF, they also have raised three children in the city, all of whom now are adults successfully pursuing non-medical careers.

Volberding is co-editor in chief of the Journal of Acquired Immune Deficiency Syndromes. He is the founder and chair of the board of the International AIDS Society — USA, and has served as president of the International AIDS Society and the HIV Medicine Association. He is the co-editor of Global HIV/AIDS Medicine, the extensively rewritten follow-up to the Medical Management of AIDS, formerly the most widely used textbook of HIV medicine.

Volberding was elected a member of the Institute of Medicine of the National Academy of Sciences in 1999 and has chaired and served on numerous reports for that organization. He is a fellow of the American College of Physicians, the Infectious Diseases Society of America, and the American Association for the Advancement of Sciences.