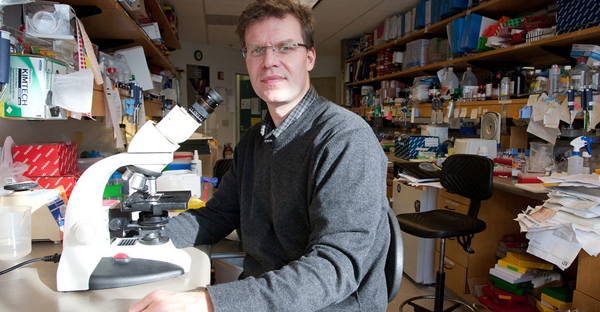 Matthias Hebrok, PhD, directs the UCSF Diabetes Center, which has rapidly accelerated the pace of research and clinical care in diabetes since 2000.

The University of California, San Francisco (UCSF) has signed an alliance with international pharmaceutical company Sanofi (EURONEXT: SAN and NYSE: SNY) to share expertise in diabetes research and identify drug targets that could lead to new therapies for both type 1 and type 2 diabetes.

The $3.1 million collaboration will bring together scientists in three UCSF labs with deep understanding of the biology of beta cells – insulin-producing cells that are destroyed in type 1 diabetes and often produce too little insulin in type 2 – with Sanofi researchers who are experienced in developing potential drug candidates into actual therapies.

“This is a true partnership between scientists with very different strengths,” said Matthias Hebrok, PhD, director of the UCSF Diabetes Center. “UCSF is known for its deep understanding of the underlying biology of diabetes, while Sanofi has great expertise in screening compounds, identifying which molecules have potential, and moving them along to develop a new drug. Such an endeavor is almost impossible to accomplish in a single academic laboratory. Thus, both partners profit from the expertise of the other group.”

The alliance is the University’s third collaboration with Sanofi, alongside brain trauma and oncology research launched last year, since the two signed a master agreement in January 2011 to work together in translating academic science into potential new therapies. Master agreements lay out the fundamental terms of research collaborations, align with the University's academic mission including broad publication rights, and form part of a core strategy for the UCSF Office of Innovation, Technology and Alliances to expedite that “bench-to-bedside” research.

Partnership Combines Expertise on Both Sides

This also is the first collaboration of its kind for the UCSF Diabetes Center, extending beyond simpler, funded-research agreements to create a two-way partnership in which scientists on both sides contribute technology and expertise to identify drug targets and test their potential.

“Sanofi is pleased to collaborate with the Diabetes Center at UCSF to combine expertise in employing new technologies for the development of innovative diabetes therapies,” said Pierre Chancel, senior vice president in the Diabetes Division at Sanofi. “The potential resulting drug discovery projects will supplement our integrated solutions model for diabetes management and help Sanofi continue to deliver best-in-class solutions to people living with diabetes."

Together, the team will assess and validate potential drug targets from a UCSF library of roughly 100,000 small interference RNAs (siRNA) – molecules that play a crucial role in turning on and off genes, including the gene that produces insulin. They also will identify Sanofi compounds that might be effective in regulating those molecules, study the impact those compounds have on UCSF laboratory models of diabetes and assess their therapeutic potential.

In the United States alone, 46 percent of adults had diabetes or pre-diabetes in 2010, according to the U.S. Centers for Disease Control and Prevention (CDC), which projects a full third of Americans will have the disease in 2050. It is the leading cause of blindness and kidney failure, a major cause of heart disease and stroke, and the seventh-highest cause of death in the U.S. Diabetes care costs $116 billion each year in the United States alone, according to the CDC, with an additional $58 billion toll in lost productivity and early mortality.

The initial project, intended as a pilot for broader joint research into diabetes, will operate under the oversight of an expert panel from UCSF and Sanofi, and focus on beta cells, drawing on the expertise of three renowned UCSF Diabetes Center researchers and their laboratories:

UCSF and its Diabetes Center have a long history of breakthroughs in diabetes and beta-cell research, spanning from the first cloning of the insulin gene to the first clinical studies blocking autoimmune destruction of beta cells. UCSF Diabetes Center researchers and their affiliated members are renowned experts in their respective fields: immunology, b-cell biology, islet and pancreas transplantation, and RNAi/microRNAs.

Jointly Released By Sanofi and UCSF