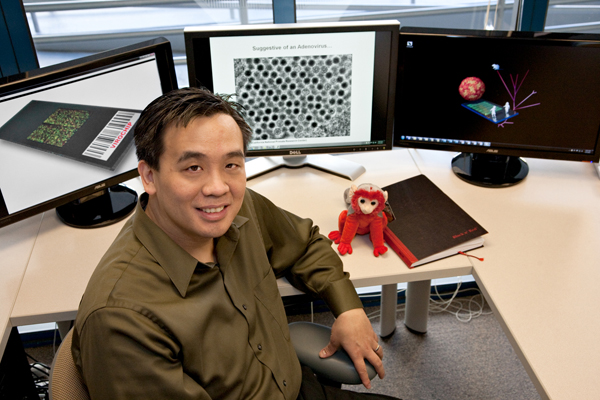 Charles Chiu, MD, PhD, director of the UCSF Viral Diagnostics and Discovery Center, identified a new virus at the time of an outbreak that killed monkeys and spread to humans – leading to the first study to document adenoviruses crossing the species barrier in real time. The center specializes in using a microarray Virochip technology developed at UCSF to identify viruses affecting humans, animals, insects or plants.

A novel virus that spread through a California monkey colony in late 2009 also infected a human researcher and a family member, UCSF researchers have found, the first known example of an adenovirus “jumping” from one species to another and remaining contagious after the jump.

In a study by the UCSF Viral Diagnostics and Discovery Center, which identified the new virus at the time of the outbreak, researchers confirmed it was the same virus in the New World titi monkeys and the two humans. They also confirmed that the virus is highly unusual in both populations, suggesting that it may have originated from a third, unidentified species.

The direction in which the virus spread, however – from monkeys to humans or vice versa – remains a mystery.

Findings appear in the July 14 issue of PLoS Pathogens, a weekly journal of the Public Library of Science.

Adenoviruses naturally infect many animals, including humans, monkeys and rodents, and are known to cause a wide range of clinical illnesses in humans, from cold-like symptoms to diarrhea and pneumonia. Unlike influenza or coronaviruses, adenoviruses had not been known to spread from one species to another.

“Now adenoviruses can be added to the list of pathogens that have the ability to cross species,” said Charles Chiu, MD, PhD, an assistant professor of laboratory medicine and infectious diseases at UCSF and director of the viral diagnostics center. “It’s been hinted at before, but this study is the first to document these viruses crossing the species barrier in real time.”

The virus, which researchers have named titi monkey adenovirus (TMAdV), infected more than a third of the titi monkeys in the California National Primate Research Center (CNPRC) in late 2009. In the monkeys, the virus was devastating, causing an upper respiratory illness that progressed to pneumonia and eventually killed 19 of the 23 monkeys (83 percent) that became sick, including healthy young adult monkeys.

Around the time of the outbreak, a researcher who was taking care of the sick monkeys also developed an upper respiratory infection, with fever, chills and a cough that lasted four weeks, as did two members of the researcher's family who had no contact with the monkey colony. All three recovered fully without medical treatment.

The primate center called Chiu when the illness spread through the colony to help identify the pathogen and prevent its spread to other animals. The UCSF Viral Diagnostics and Discovery Center specializes in using a microarray Virochip technology developed at UCSF to identify viruses affecting humans, animals, insects or plants.

Because the researcher’s illness was not reported for several months, the virus could no longer be detected directly, so Chiu worked with the California Department of Public Health to conduct antibody testing on the monkeys, the researcher and two of the researcher’s family members who also reported having been sick.

Antibodies are a product of the body’s immune response to pathogens and generally remain in the bloodstream for several months after infection. As a result, they serve as a marker of whether a person was exposed to a specific virus. Both the monkeys and researcher tested positive for antibodies to the TMAdV virus, as did one of the two family members. No other humans at the center were found to have been infected.

The UCSF team found that the new virus clearly belonged to the adenovirus family, yet was unlike any adenovirus ever reported to infect humans or monkeys, including from large-scale studies by public health agencies such as the U.S. Centers for Disease Control and Prevention. The new virus was so unusual, in fact, that it shares only 56 percent of its DNA to its closest viral relative.

“This is clearly a new species of adenovirus and it’s quite different from anything we’ve seen previously,” said Chiu. “Given the unusually high fatality rate of TMAdV in the titi monkeys, they are not likely to be the native host species for this virus. We still don’t know what species is the natural host.”

Chiu said the lack of previous records of this virus in humans indicates that it is also unlikely to have started with the researcher. In testing other monkeys at the primate center, the team found one healthy rhesus (Old World) monkey with antibodies to TMAdV, which Chiu said could indicate that the virus originated in Old World monkeys, then spread to the New World colony that lacked antibodies against it.

The viral center is conducting further studies in both humans and monkeys in Brazil and Africa to determine whether the virus is common in wild populations of either Old World or New World monkeys, and whether it has crossed species in those settings to humans who live nearby.

This work was supported by grants from the National Institutes of Health and an Abbott Viral Discovery Award to Charles Chiu. The funders had no role in study design, data collection and analysis, decision to publish, or preparation of the manuscript. UCSF has filed a patent application related to the novel adenovirus TMAdV.

For more information on the viral discovery center, see its website. http://vddc.ucsf.edu.