June 5, 2011 marks three decades since the emergence of a mysterious virus that has since become the most devastating disease known to mankind – AIDS.

AIDS has grown into a global pandemic killing more than 33 million people around the world, according to the US Centers for Disease Control and Prevention. 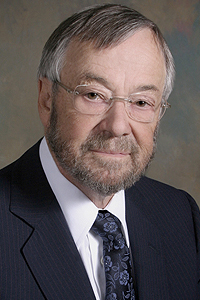 While a cure for HIV remains elusive, for the first time ever, HIV/AIDS efforts in the US are led by a single, coordinated effort, the National HIV/AIDS Strategy [PDF - 1.2MB] announced in July 2010. The three primary goals of the strategy are reducing incidence, increasing access to care and optimizing health outcomes, and reducing HIV-related health disparities.

UCSF has been working toward these goals for the past 30 years as a leader in AIDS basic and clinical research, patient care, policy development and community and global outreach.

These collective efforts at UCSF are coordinated by the AIDS Research Institute (ARI), which is committed to fostering innovative and integrated science to prevent, understand, treat and someday cure HIV infection. The ARI's mission includes sharing its findings worldwide and training new scientists to continue working toward the ultimate goal of ending the HIV/AIDS epidemic.

“Since the disease was first reported 30 years ago, UCSF has been fighting this global scourge,” says John Greenspan, BDS, PhD, director of the ARI. “We’ve made incredible advances – from the development of new drugs and promising vaccine candidates to breakthroughs in clinical research and care to establishing groundbreaking prevention and education programs in dozens of countries.”

UCSF is unwavering in its multifaceted assault on the virus, Greenspan reports. “In just the last year, we have learned that biomedical prevention tools like microbicides and the use of antiretrovirals before infection among individuals at high risk of HIV infection – known as pre-exposure prophylaxis, or PrEP – can be effective in slowing the spread of this disease.” Read more.

UCSF physicians and researchers are uncovering how HIV damages systems throughout the body in previously unseen ways, contributing to complications and premature aging of those living with HIV – patients whose median age is nearing 50 years. Read more.

But the urgency to saving lives remains great. Some 50,000 people in the US are infected annually and more than 8,000 individuals are still dying of AIDS every day.

As one of the preeminent biomedical education and health sciences research institutions in the world, UCSF emerged early as a pioneer in the fight against AIDS – in part due to its proximity to a vulnerable patient population and to its strong commitment to public health.

“AIDS has brought the University together like no other disease,” Volberding said back in 1994. “Pharmacologists are working with pediatricians, epidemiologists with basic scientists. We’re using all our resources because we know that San Francisco will be disproportionately affected by this disease for decades. And we have a responsibility to San Francisco to be the best.”

Volberding is among a group of veteran UCSF faculty that has committed their careers to combating the disease. Together, with colleagues at UCSF and throughout the City, they developed the so-called San Francisco model, which has focused on providing outpatient treatment and community-based services, connecting patients with a full range of social services and clinical trials needed to advance treatments.

In the 1980s, San Francisco General Hospital (SFGH) was considered ground zero when the emerging epidemic first struck gay men. Volberding encountered the disease on his first day on the job as a physician at SFGH, the public safety-net hospital where UCSF physicians and trainees have practiced medicine since the affiliation began in 1873.

Volberding and colleagues Merle Sande, MD, and Constance Wofsy, MD, helped to establish the first AIDS clinic, Ward 86, now known as part of the Positive Health Program, an internationally recognized center that provides care to the newly infected and those who have been living with the disease for decades, as well as preventing new infections. Read more.

A look back at UCSF’s accomplishments in HIV/AIDS was already impressive when the UCSF Magazine covered the topic nearly 20 years ago. Among those recognized then were:

Many more UCSF scientists and scholars deserve credit for their tenacity in tackling HIV/AIDS. Indeed, a timeline of the past 30 years highlights just a few of the firsts in the ongoing war on AIDS: lessons learned, lives lost and the legacy of leadership demonstrated by UCSF. Read more.