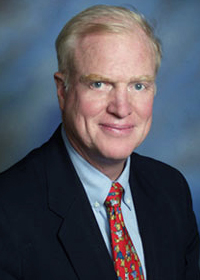 Often referred to as the “Father of Fetal Surgery,” Michael Harrison, MD, performed the world’s first open fetal surgery 30 years ago at UCSF, home of the first fetal treatment center in the United States.

As Harrison, professor emeritus of clinical surgery, pediatrics, obstetrics and gynecology at UCSF, celebrates the 30th anniversary of the historic surgery, another milestone in fetal intervention is on the horizon. The results of a major eight-year clinical trial led by researchers at UCSF and other institutions was released today (Feb. 9) that could transform treatment for babies with the birth defect spina bifida.

According to the findings from the clinical trial, babies who undergo an operation to repair spina bifida while still in the womb develop better and experience fewer neurologic complications than babies who have corrective surgery after birth. The study is the first to systematically evaluate the best treatment for myelomeningocele, the most serious form of spina bifida, in which the bones of the spine do not fully form.

“Particularly, the history of fetal surgery started here at UCSF by Dr. Michael Harrison over 30 years ago underscores the commitment to continuous improvement. We’re happy to see the positive results, but are not satisfied yet and our work will continue seeing how we can do even better.”

Harrison, director emeritus and co-founder of the Fetal Treatment Center at UCSF Benioff Children's Hospital, reflects on the birth of fetal surgery at UCSF in 1981 and how the specialty has evolved from an idea he nurtured since internship.

Back in the late 1970’s when you were conceptualizing fetal surgery, did you think it would be possible and what was the response?

Back in the beginning everyone was a skeptic and that’s not surprising because the idea of fetal surgery was sort of shocking. I actually came to UCSF in 1978 with the idea that we should do it, but no one could predict how it would roll out. We started with the general idea and thought we would do the groundwork and see if we could apply it clinically, and it really happened faster than I thought it would.

What contributed to the speed of its implementation?

I think it happened a lot because of the environment here. Some things were already in place like the experimental animal model. The experimental side was already very advanced at UCSF, and on the clinical side, a lot of pieces were in place like some very good folks in neonatology and perinatology, so when we brought the idea of surgery to those groups the infrastructure was already in place to move it forward. It was rather unusual to have those resources at the time, and I can’t think of another university where we would’ve been so lucky to have those resources.

Was UCSF receptive when you came with this idea?

Yes, a big factor in our success was the openness to something new that was at UCSF. I’d come from the Harvard environment and it couldn’t have been done there because it was too rigid. Here at UCSF there was a younger attitude and a lot of things we needed for clinical application people here were used to, like UCSF’s Committee on Human Research. The ethics folks were willing and ready to think about something brand new.

How has fetal surgery evolved since you first performed it 30 years ago?

Fetal intervention started with the tools we had available at the time, which were crude surgical tools. Basically, we knew how to cut and sew. So we were limited by those tools, which enabled us only to perform open surgery. But we quickly saw we could move beyond that as the only surgical option and as techniques improved it would become minimally invasive, then endoscopic and image guided manipulation. So from the beginning you could see how it would evolve and we predicted it.

How does the Management of Myelomeningocele Study (MOMs) study reflect this advancement?

The MOMs trial could completely transform treatment, which is a big deal and pretty cool. But it is also a reversion to the past, and uses some of the exact surgical techniques we solved 25 years ago.  Stapling, closing the uterus without bleeding, these are things we studied and solved 25 years ago and thought we wouldn’t need anymore. But for this procedure it is currently the old fashioned open surgery we invented. The procedure will definitely evolve to be minimally invasive.

UCSF has been at the forefront of fetal treatment for the last 30 years. How is the study on spina bifida continuing that trend?

The fetal intervention for spinal bifida was being done at other hospitals prior to this trial. We said, ‘wait a minute, we don’t know if this is even the right thing to do and we need a proper study.’ We were responsible for getting the other centers on-board with the MOMs trial. We had to know if it was the right treatment or dangerous before it could be widely applied.

Why do you think UCSF has remained at the forefront of innovation for fetal intervention?

We have an unusual depth of talent and an attitude that says ‘if you do things carefully you can do new things.’  We’re more tolerant of innovation, and applying innovative treatment in humans.

Over the last 30 years, does one patient case stand out in your mind as being a turning point in the specialty?

Yes. The story begins back when I got to UCSF in 1978, and diaphragmatic hernia (a fatal birth defect in which there is an abnormal opening in the diaphragm) was the one thing I wanted to fix, and we’re still working on it now so it spans all those years. We first made a model in a fetal lamb, figuring out a way to fix it surgically and then it was one of the first things we did in humans.

After we had done open surgery we were developing new ways to do the procedure when we figured out we needed a different approach and could do a really cool thing -- instead of open surgery we could temporarily plug the fetal trachea which made lungs grow and physiologically solve the problem of not having enough lung when you’re born.

We came across the idea to do fetoscopy, where we could access the fetus endoscopically, eliminating the need for open surgery. Then we developed the tools to actually achieve it by putting a detachable balloon in the fetal trachea, called fetal bronchoscopy.

The first person to have that done was Analisa Amen’s baby in the mid-1990’s. It was before the clinical trial and the success for her baby girl was what allowed the [National Institutes of Health] trial to go forward and be funded. It changed the whole history of this treatment. She and her husband were from the East Bay and now the child is doing great.

This has evolved as the standard protocol around the world, most commonly in Europe where they’ve done a non-randomized trial. Others around the world and the U.S. are taking this up, and we’re trying to coordinate a new trial among the big centers in the U.S.