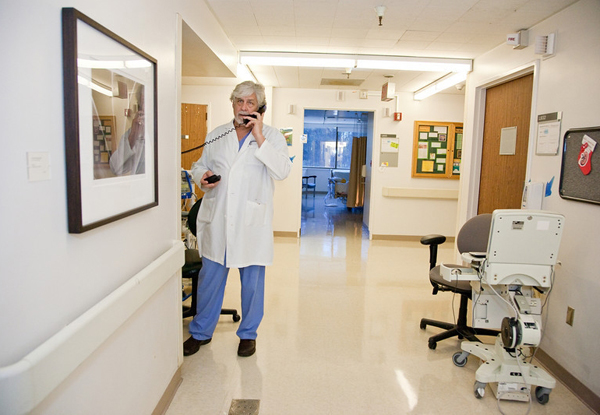 At UCSF Medical Center, the majority of organs for transplantation are obtained from people who have died and whose families have given permission for their organs to be donated. But today, an increasing number of liver transplants are performed with portions of livers donated by a living relative or friend. The need for liver donations is great. Nationally, more than 17,500 patients are on the waiting list, with more added each day. Almost 5,000 patients receive transplanted livers every year, but more than 1,700 patients die each year while on the waiting list. Schorr began the interview asking Roberts about the need for living patients to become donors. John Roberts: Pretty much everybody knows there are not enough organs for all the patients who need transplants. What happens is that organs are directed to those patients who are the sickest. So, the patients who have the greatest chance of dying in the next three months or so are the ones who get priority for the liver transplant. This works well if you’re fairly sick, but one of the problems is that patients who are really sick are frequently in the intensive care unit. They have deteriorated to the point where they have multiple medical problems, other organs aren't working. The operation becomes higher risk. 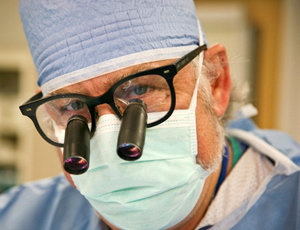 John Roberts, chief of the UCSF Transplant Services, is a leading expert in liver transplant surgery for adults and children at UCSF Medical Center.
Then, it takes the patients much longer to recover after transplant because when you're relatively well you can walk out of the hospital say within a week after transplant, but if you're really sick and in the intensive care unit, it may take weeks to months before you can get back to a normal life. Living donor liver transplant is a method of providing patients who have a living donor with a liver before they get really sick. So that’s kind of where I see living donor liver transplant. One of the things I tell all my patients is that if we had enough cadaver organs to go around, we wouldn’t do living donor liver transplants because we don’t want to put a donor at risk and it’s a more difficult surgery for the recipient because you're getting a piece of a liver rather than a whole liver. It takes you longer to recover, and it has more complications related to where we sew together the blood vessels and the bile ducts. Schorr then asks Roberts about the process of living donor transplants. John Roberts: When we think about living donor transplant, what we’re banking on is the ability of the liver to regenerate itself. Now, it’s not the same sort of regeneration we think about with the starfish, where we cut off the arm and it grows a new arm. With the liver, what happens is the remaining liver gets bigger, and your body knows the size of the liver that it needs. When it recognizes that there is not enough liver, it sends nutrients and signals to the liver and says “get bigger.” It’s a process that probably happens within normal people every day. Our liver is changing in size slightly, not enough so that you can measure it, but it probably changes a little bit in size every day. If we cut out part of a liver and transplant it into somebody else, the donor, the person who has given up part of their liver, the remaining liver hypertrophies. It gets bigger, and the number of liver cells increases. It gets big enough so that everything goes back to normal in the donor. In that piece of liver that I put in the recipient, it also gets bigger because the recipient’s body is saying “not enough liver” and sends signals to the liver “get bigger and bigger,” and it grows. Both of these processes happen really fast so if I put in a piece of liver that’s small, within actually a week or so that liver will have grown a lot. It probably continues to grow over six months to a year, but most of that growth happens within days to weeks after the surgery, and it can happen so fast during the recovery period, particularly for the donor, that we have to give the donor a lot of extra nutrients to allow the liver to grow. So that’s one of the things that we do. To read the full transcript of this interview or hear the interview, visit UCSF Medical Center website. Photos by Susan Merrell