UCSF Medical Center teams are touring and testing the mock-up hospital rooms that are being planned for the Mission Bay hospital complex.

The new UCSF Medical Center at Mission Bay project is proceeding on time, significantly under budget and is on track to break ground this fall, pending funding approval by the UC Regents.

UCSF expects that construction of the new 289-bed children’s, women’s and cancer hospital complex will be completed in time so that patients can begin receiving care at Mission Bay before the end of 2014, said Mark Laret, chief executive officer of UCSF Medical Center.

UCSF plans to build a 289-bed, integrated hospital complex to serve children, women and cancer patients near its existing biomedical campus at Mission Bay. Upon completion of the first phase in 2014, the 878,000-gross-square-foot hospital complex will include:

In his report to the Regents last week, Laret said that $100 million has been shaved off the original expected project cost of $1.68 billion – a result of both the economic recession and the innovative strategies being used to manage its design and construction. He expects to trim that cost even further before breaking ground.

“There are not too many positive things to say about the economic downturn of the last two years, but this project is one beneficiary,” Laret told the Regents.

In fact, the overall project cost will be cut by at least another $100 million by July, he noted, with a guaranteed maximum price that would be at least $200 million below the original cost estimate, or nearly 20 percent lower than the original construction cost.

“On the job site today, we have over 100 people from the architects, general contractors and subcontractors virtually constructing the hospital on computers, to reduce the risks of costly and time consuming clashes, which lead to change orders in the field,” he said. “Every one of the disciplines engaged in this integrated effort has cost reduction targets and incentives. We constantly benchmark our costs against other projects, past and current, and we have been able to lock in recession-level prices.”

Cindy Lima, the project’s executive director, credits the project team for being very successful in reducing costs beyond that afforded by the recession. “Hundreds of creative ideas were proposed by team members aimed at reducing cost, improving productivity and streamlining the design. We are all very proud of what has been accomplished,” she said.

Progress is already visible, both in the newly cleared site at Mission Bay and in the mock-up patient and operating rooms that clinicians are already trying out to make sure they work in practice.

The update and project progress drew praise from the Regents, as well as from UCSF Chancellor Susan Desmond-Hellmann, MD, MPH, who added that the Mission Bay medical center project will help support the economic recovery of both San Francisco and California.

During his update to the Regents, Laret also reported that UCSF has received a verbal pledge for $100 million from an anonymous donor in support of the children’s hospital. The pledge builds on three years of generous philanthropic contributions to this project, starting with a $25 million gift in 2007, and bolstered by a $125 million matching challenge gift from the Atlantic Philanthropies in 2008. The new pledge is expected to be formally announced in greater detail at a later date.

“This gift will bring our total today to about $325 million, more than half-way to our goal,” Laret said of the overall $600 million fundraising goal. “This new gift also completes the Atlantic Philanthropies challenge. And we believe it marks the first time in the history of the University of California that a single capital project has attracted two gifts of $100 million or more.” 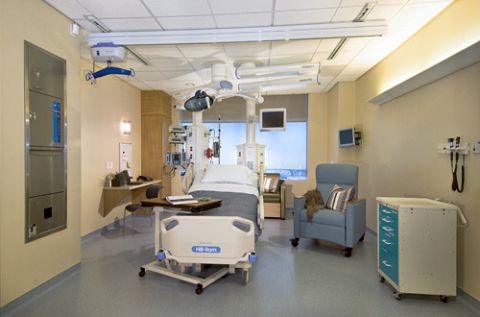 This mock-up room shows what a patient room may look like in the intensive care unit at UCSF Medical Center at Mission Bay.

Laret said he hopes to be closer to $400 million in pledges by the September Regents’ meeting, in which the board will be asked for final funding approval of the project. The project aims to borrow $700 million under the University’s medical center pooled credit, and could benefit from a 35 percent interest rate subsidy by issuing Build America Bonds, which would save more than $160 million on a project this size.

The medical center has already contributed $60 million to the project from its own operating cash and expects to contribute an additional $50 to $150 million over the next three to four years. Laret said the medical center is proceeding under the assumption that no state funds will be available for the project.

If the Regents approve the funding plan in September, UCSF will be able to proceed with ground breaking this year.

UCSF Medical Center at Mission Bay will play a key role in UCSF’s ability to continue providing the state-of-the-art patient care that has earned it a consistent placement among the top 10 medical centers nationwide.

Laret explained the medical center’s current facilities on Parnassus Heights and at Mount Zion both require significant seismic retrofits or closure within the next few decades. State seismic laws require UCSF to replace Moffitt Hospital at Parnassus, where all UCSF intensive care units, the children’s hospital and half of its operating rooms are currently located, by 2030. Mount Zion, which houses both inpatient and outpatient cancer surgery and adult medical services, also must either be retrofitted or stop operating by 2015, and by 2030 it must be shuttered for inpatient use.

While the seismic issues drove the initial plans for the Mission Bay hospital complex, that’s only part of the reason it’s so important, Laret explained. Existing facilities cannot accommodate all the patients who need the specialized care UCSF provides and they cannot support UCSF’s efforts to recruit faculty essential for building the new clinical and academic programs that are key to achieving UCSF’s strategic plan.

By locating the hospital complex across from the thriving biomedical campus at Mission Bay, UCSF will be able to bring together basic scientists, clinical researchers and physicians to share resources, insight and ideas to accelerate the progress of discovery to benefit patients.

“UCSF is widely viewed as one of the great sources of medical innovation, the result of interactions of clinicians with scientists at our Parnassus Heights and Mount Zion sites,” Laret said. “We believe the full potential of Mission Bay’s research site will be realized with the addition of clinical care components.”

In addition, current facilities don’t accommodate the changing needs of patients and modern medical practice, he said. Inpatient facilities, for instance, were not designed with air conditioning, space for computers for electronic health records, or room for family members to stay with loved ones.

Laret delineated the long-term plan for UCSF, with two major hospital sites at Parnassus Heights and Mission Bay, both of which are integrated with major research facilities, and a third site at Mount Zion that will specialize in outpatient care, with research. Future build-out at Mission Bay could include additional hospital facilities to the west of the current site, up to a total of 550 beds, either to meet increased demand or help resolve the Moffitt Hospital seismic issues in 2030.

“This is a large project, and we are appropriately approaching it with great caution and care,” Laret said. “But all of us involved with it are acutely aware that this is a profoundly important project to UCSF, the patients we will serve; the economy of the Bay Area; and our mission of advancing health worldwide.