Members of the UC San Francisco community have united in calls for racial justice in town halls, organized and joined peaceful protests on and off campus, and knelt in solidarity with black Americans following the police killing of George Floyd in Minneapolis on May 25.

For many, it compounded the painful realities of the disproportionately high death toll among black people due to police violence and the coronavirus pandemic.

“This inflection point in our nation’s history, the confluence of civil unrest and the COVID-19 global pandemic shines a very bright light on the growing disparities amongst us. These widening divisions threaten the very heart and soul of our society and our humanity,” said Chancellor Sam Hawgood, MBBS, during a June 5 virtual town hall. “So let us rise to the challenges by examining our own individual and institutional biases and do the hard work to address them.”

Across UCSF, several town halls and gatherings have addressed racism and inequality. Watch or listen to the events:

“At UCSF, we have a responsibility to speak out against violence, including police violence, that is racially motivated,” he said. “It is anathema to the core values of our community, which stands firmly against bias and discrimination of all kinds. Violence of this nature, along with other elements of systemic racism, is a public health issue. We denounce it and we must take action to eliminate it.”

Set against the backdrop of the COVID-19 pandemic that has disproportionately impacted black Americans and other ethnic minorities, members of the UCSF community have spoken out to curb structural racism at the University and UCSF Health.

“At UCSF, we seek to dismantle systemic racism and the impact of bias,” said Renee Navarro, MD, PharmD, vice chancellor of Diversity and Outreach, during a May 29 town hall meeting. “We seek to build and nurture diverse health care and science leaders, provide the highest quality of care to all of our patients, and live the full meaning of our principles of community and PRIDE Values. Change will not come if we remain silent. For in our silence, we are complicit to injustice.”

Over the course of two weeks, faculty, staff and learners have expressed their feelings of pain, outrage and frustration about the centuries-long scourge of racism and inequalities in America during several virtual town halls, in social media and in-person gatherings on campus. 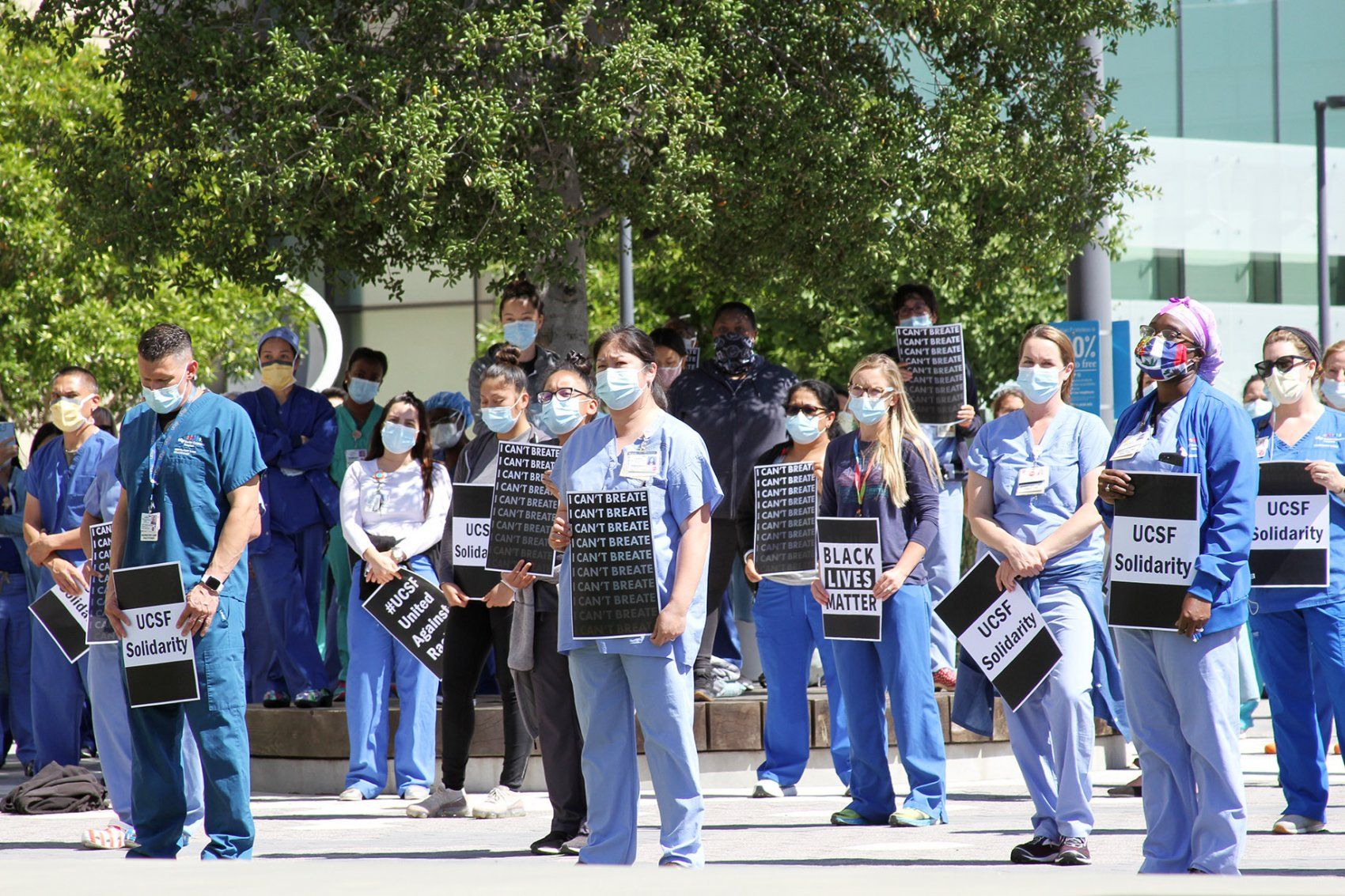 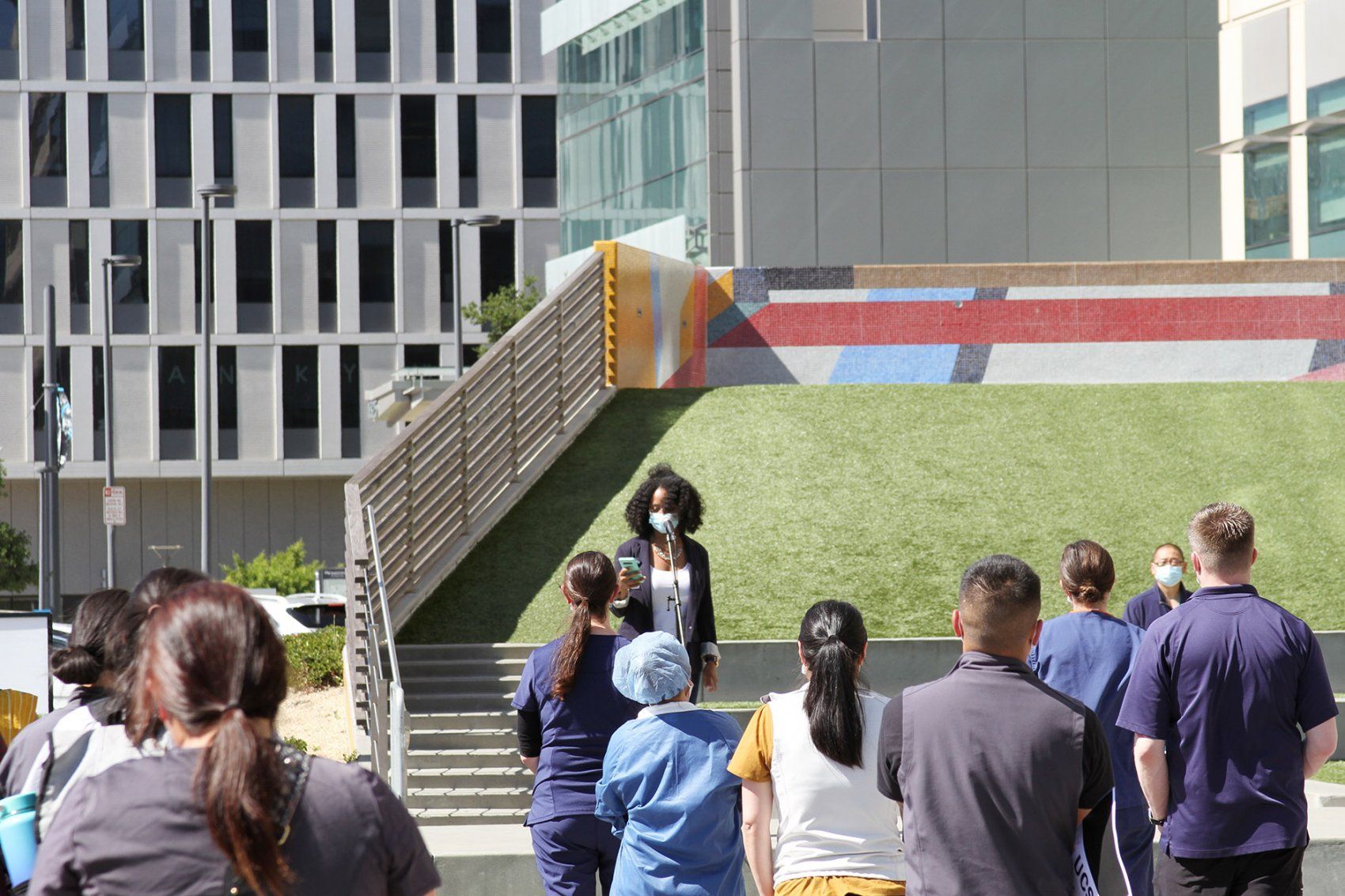 Several people from the UCSF comunity spoke during the June 3 rally at the UCSF Mission Bay Medical Center. Photo by Heather Hoover 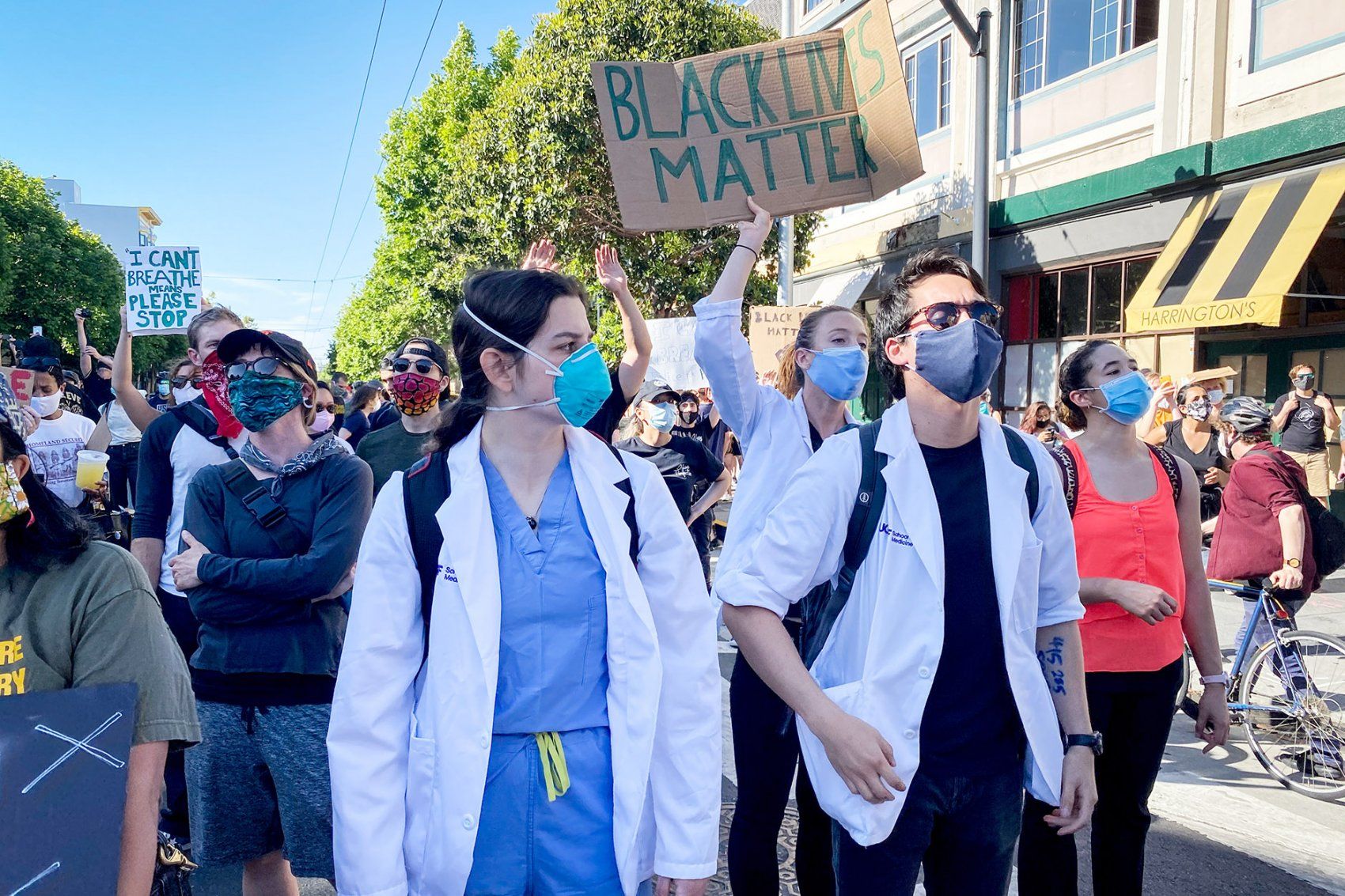 UCSF students were among the thousands who marched in San Francisco’s Mission District on June 3 as part of the ongoing nationwide actions. Photo by Barbara Ries 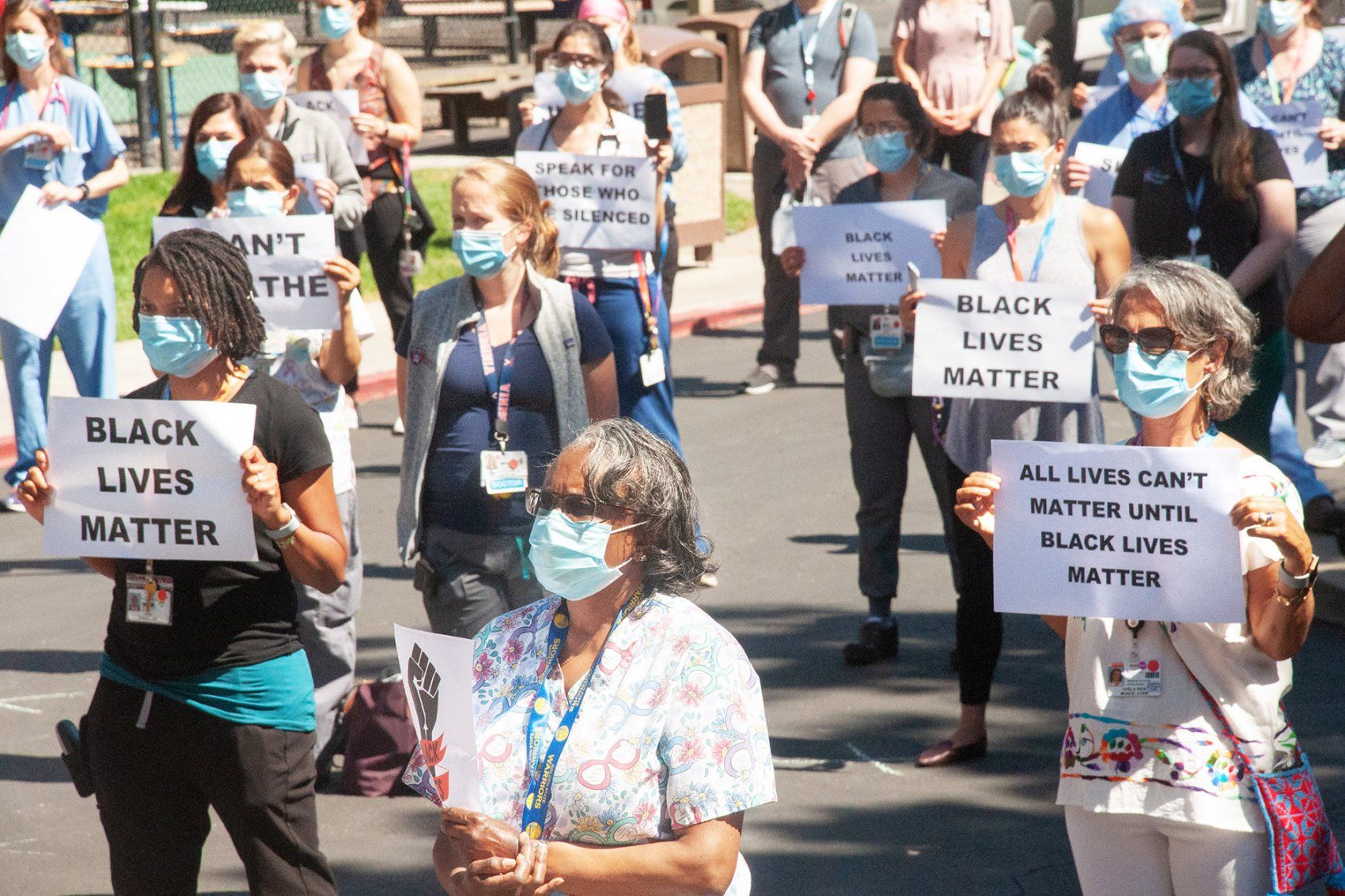 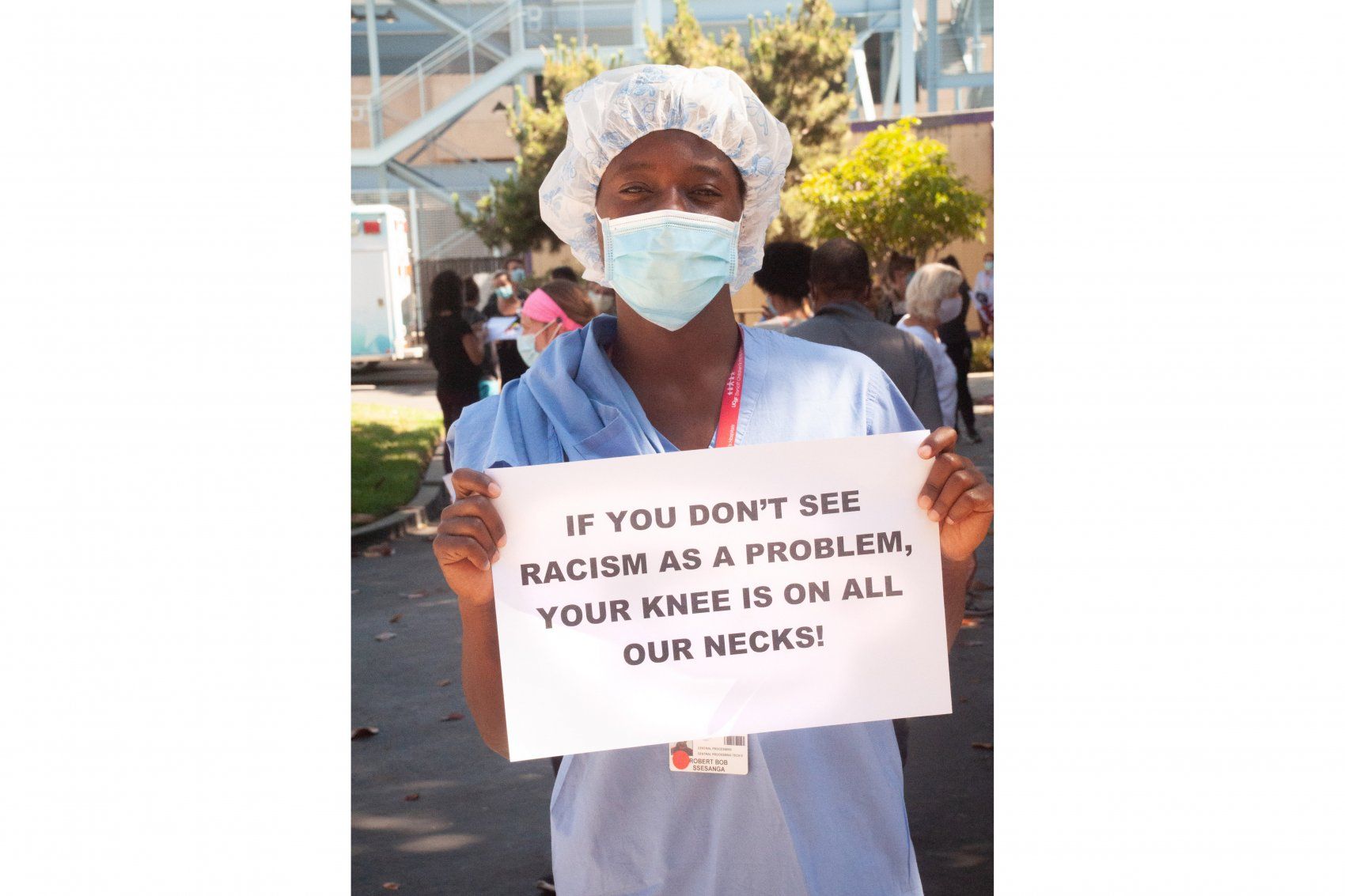 Robert Ssesanga, a worker at UCSF Benioff Children’s Hospital Oakland attends a rally outside of the hospital on June 4. Photo by Karina Bingham 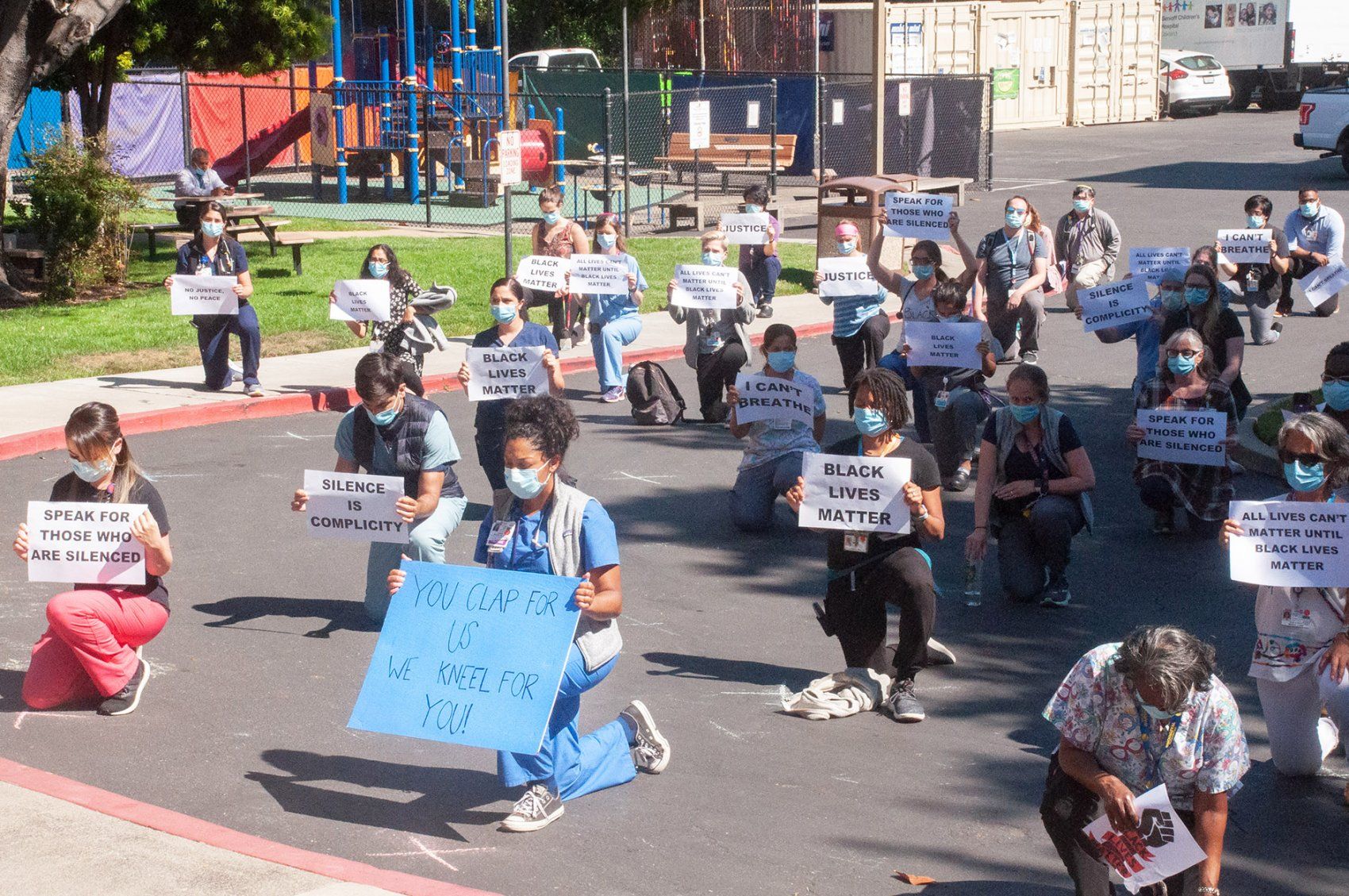 Staff kneel outside of the UCSF Benioff Children’s Hospital Oakland during an event on June 4 that coincided with another rally in San Francisco. Photo by Karina Bingham 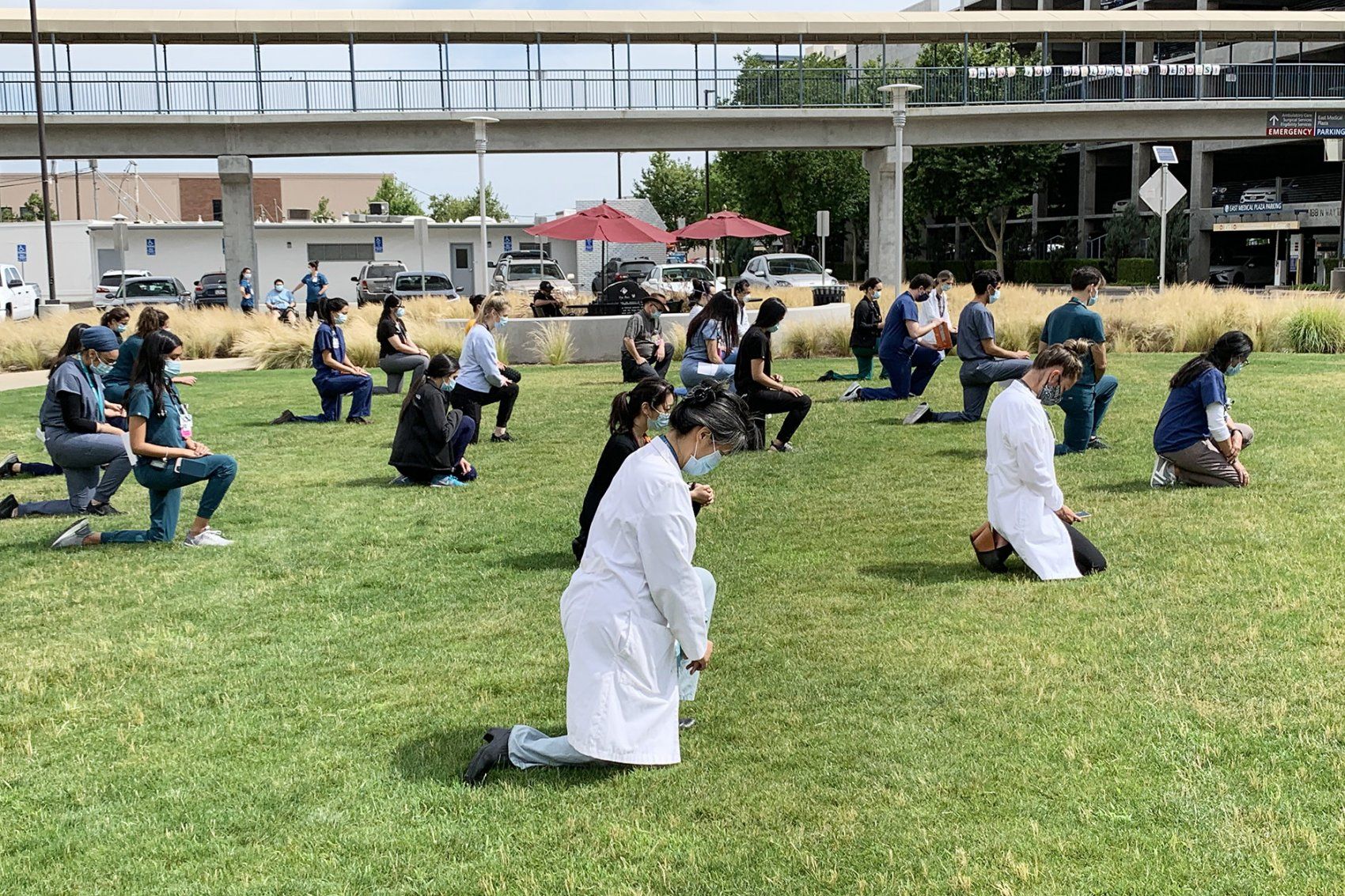 Members of the UCSF Fresno Department of Pediatrics kneel in solidarity during a rally on June 5. Photo by Christian Faulkenberry-Miranda 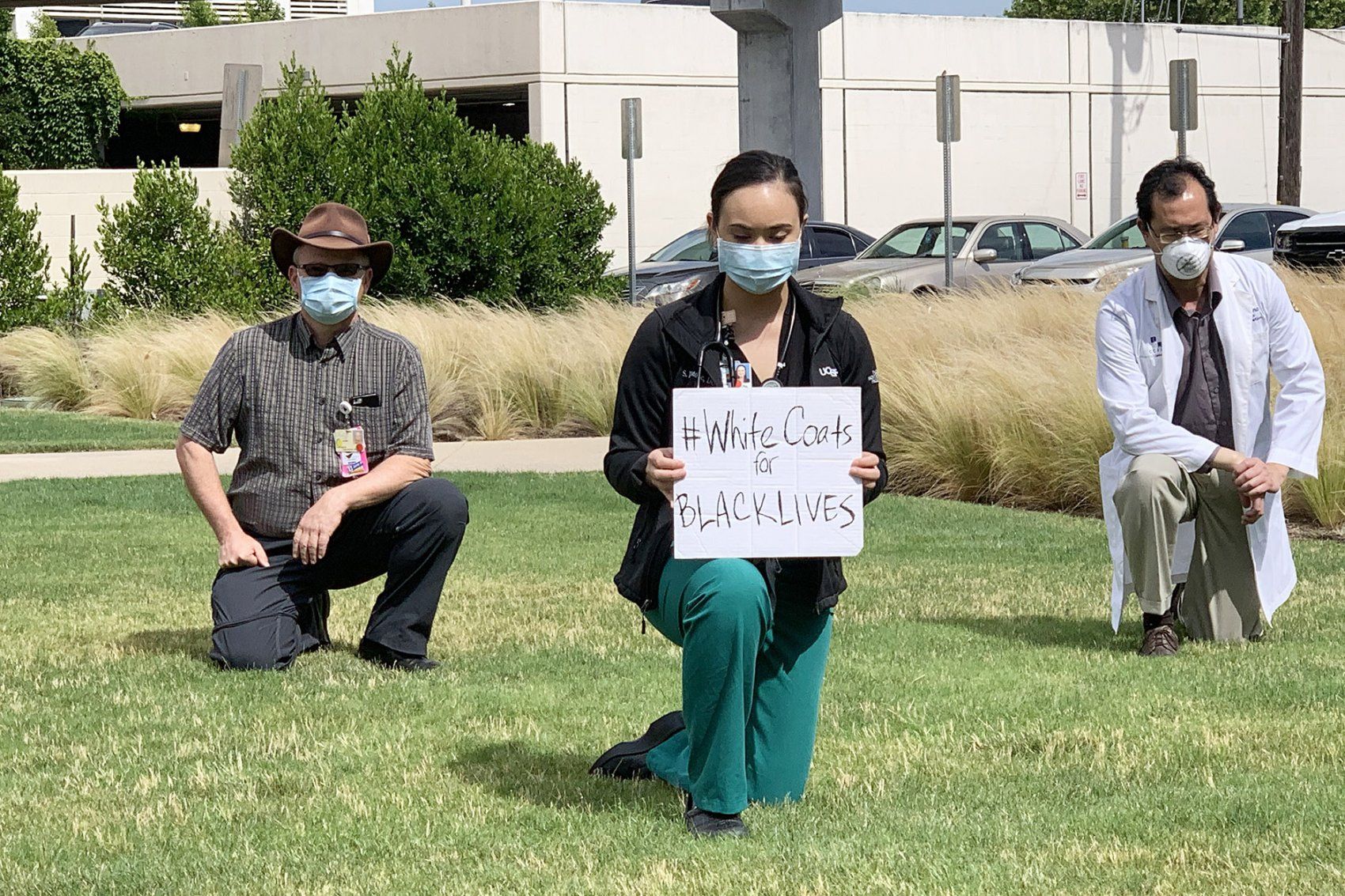 UCSF Fresno Department of Pediatrics clinicians and staff joined a rally on June 5 in solidarity with protestors calling to address systemic racism. Photo by Christian Faulkenberry-Miranda 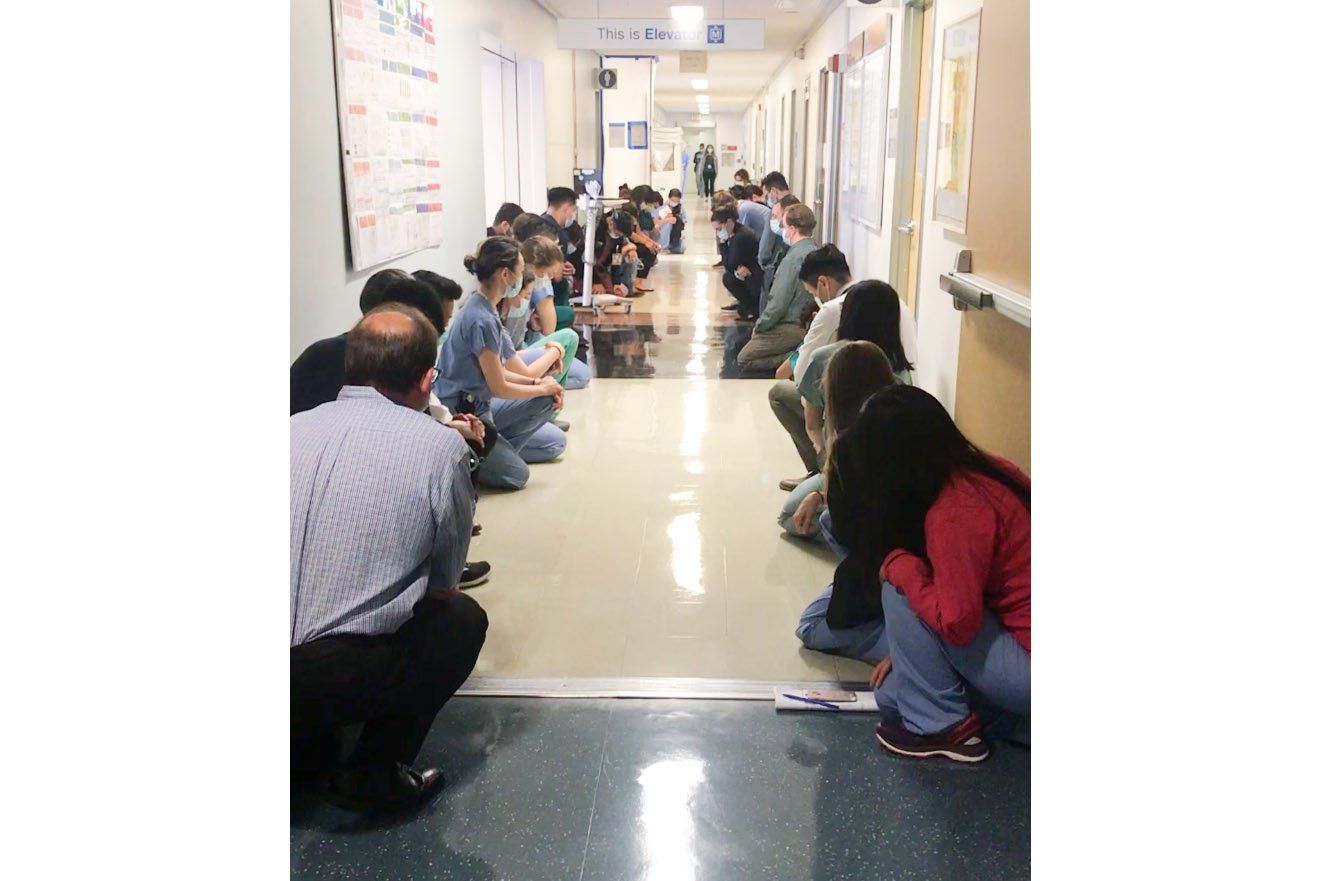 Health care workers kneel in a hallway of the UCSF Helen Diller Medical Center at Parnassus Heights on June 2 in solidarity. 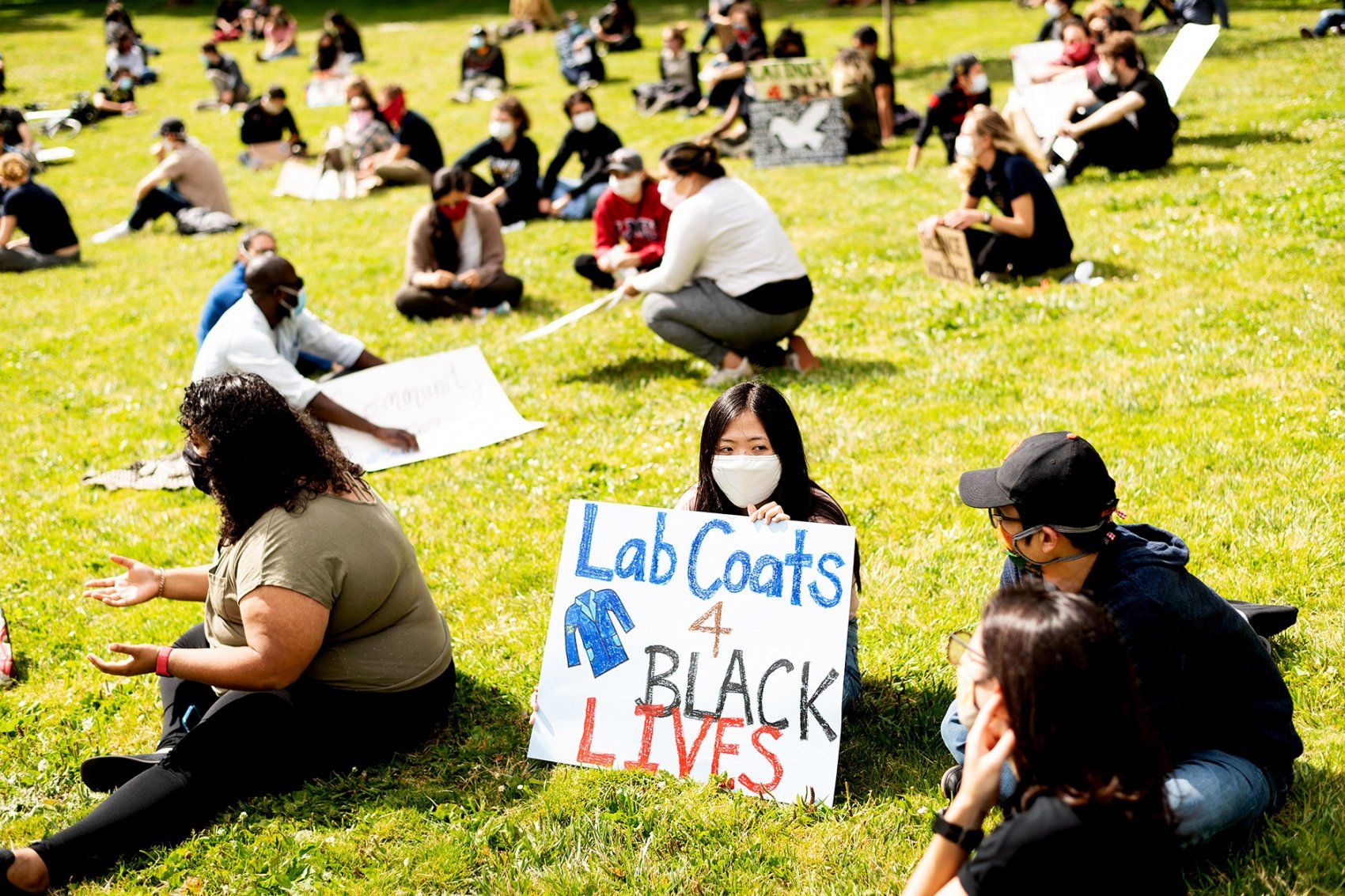 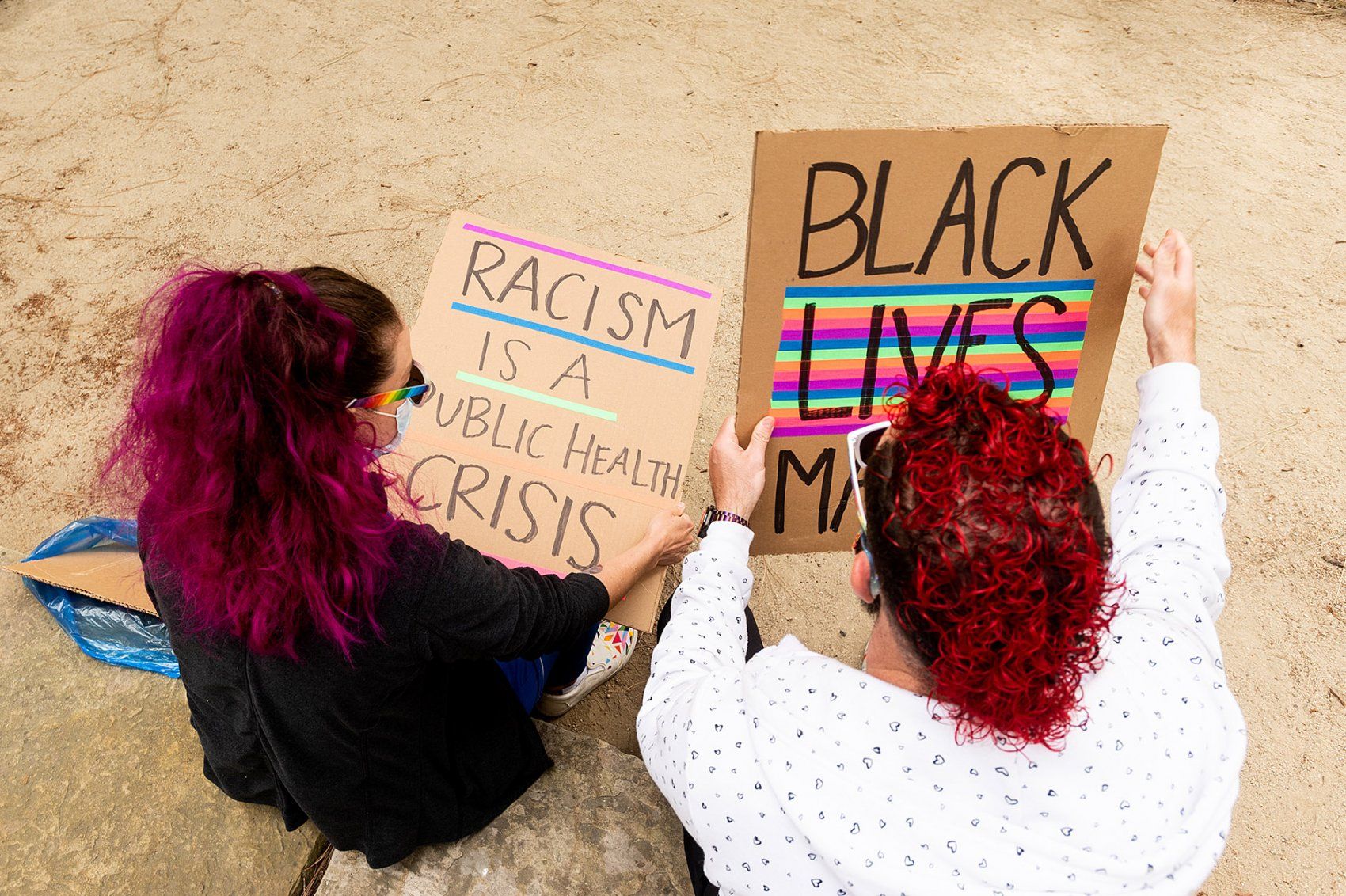 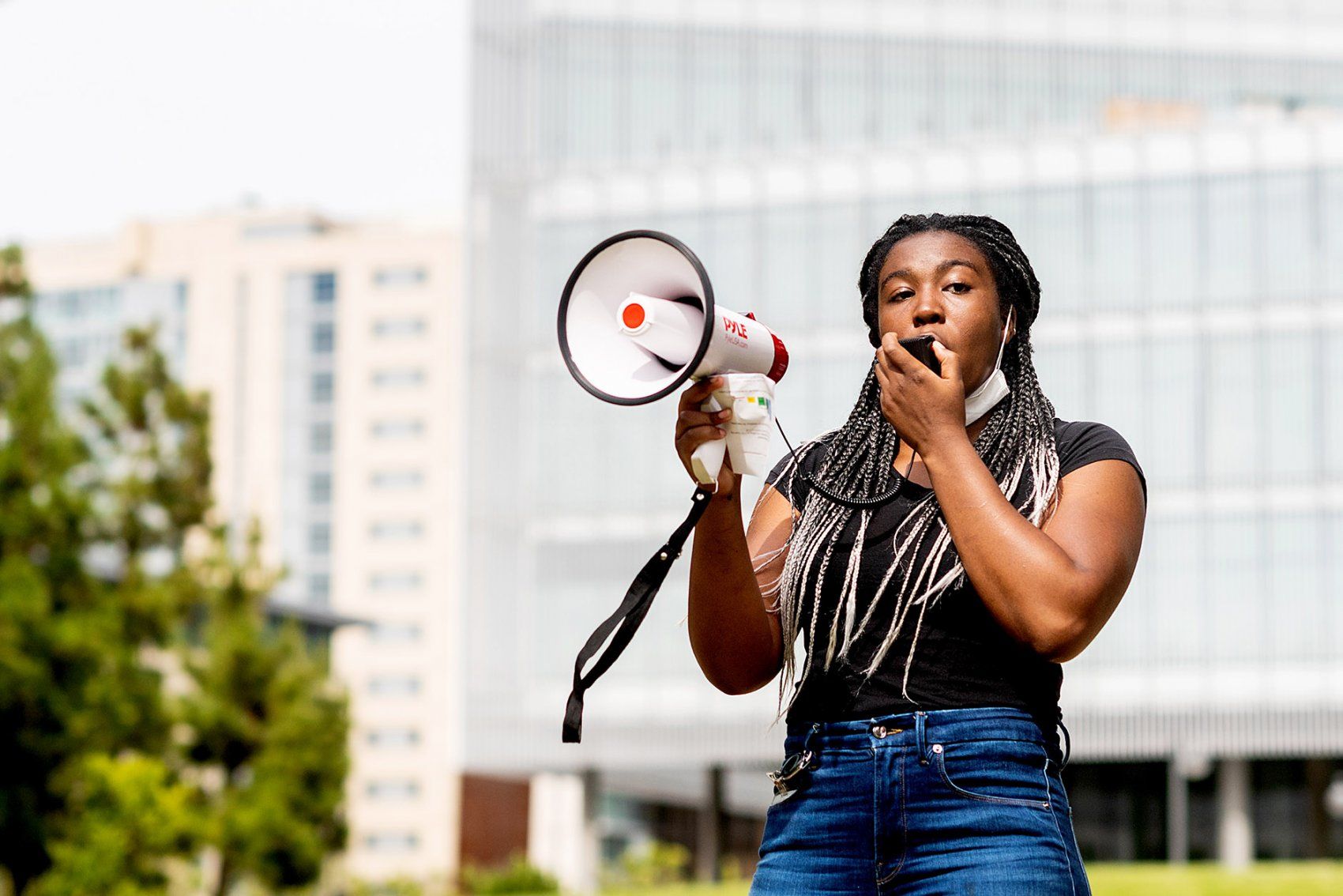 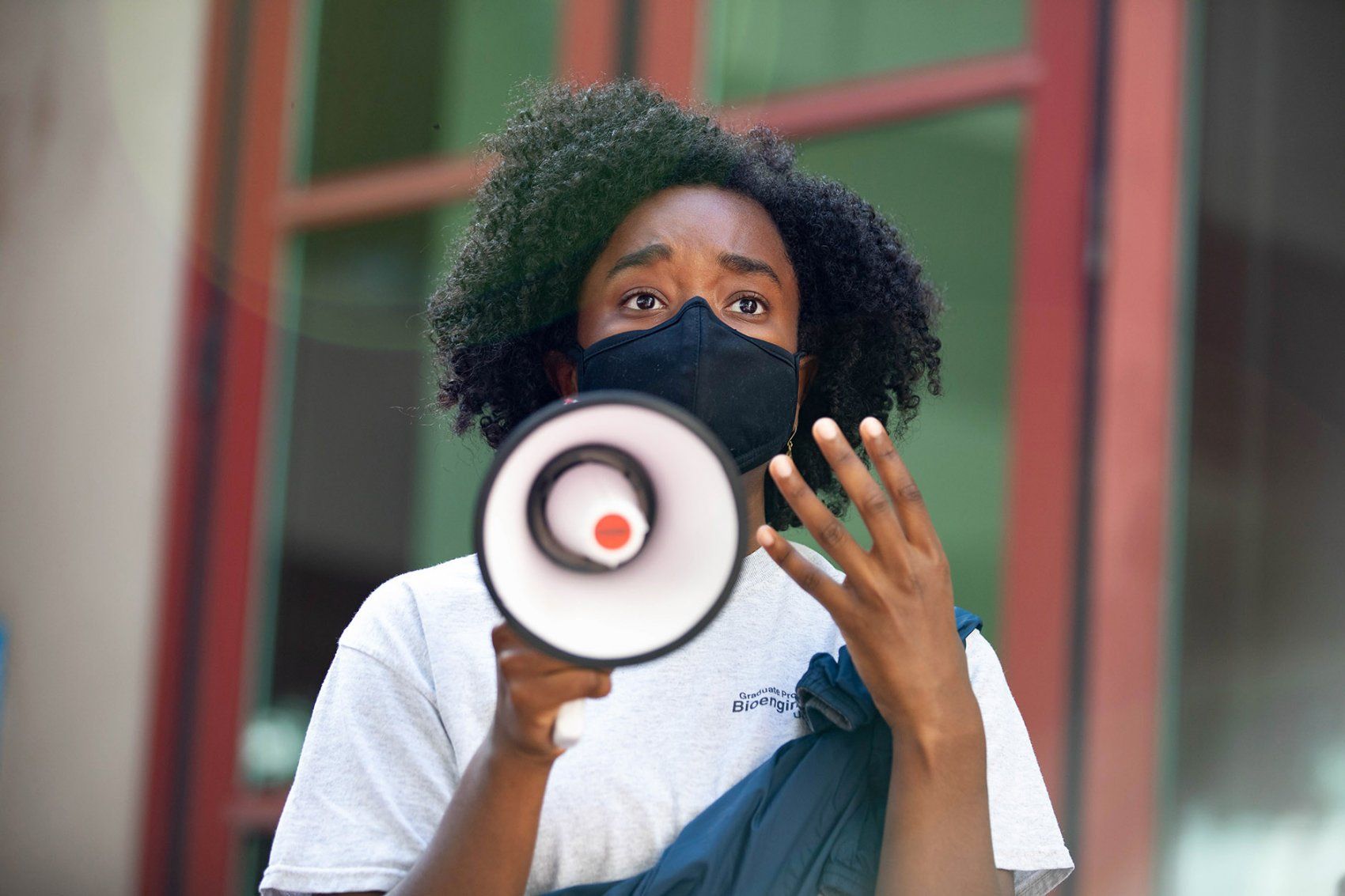 Nadia Mohammed Elmassalami Ayad, a graduate student in Bioengineering and 2019 Discovery Fellow, speaks during a June 11 rally at the Parnassus Heights campus. The event promoting anti-racism within academia was held concurrently with a similar event on the Mission Bay campus. Photo by Susan Merrell 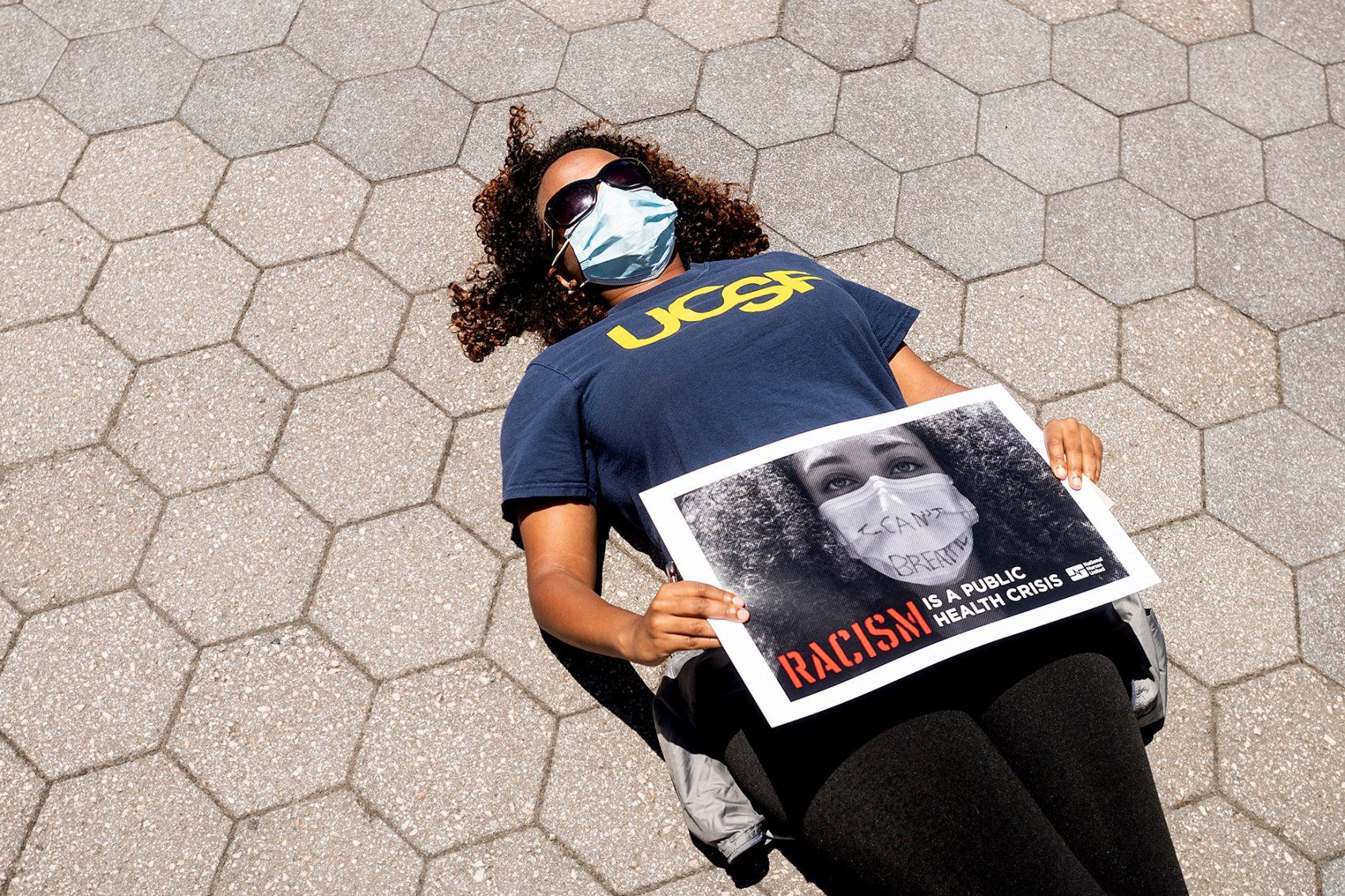 Tatiana Kelil, MD, of UCSF Radiology joins dozens of coworkers for a 8 minute, 46 second “die-in” during a rally at UCSF Medical Center at Mission Bay on June 13. Photo by Noah Berger 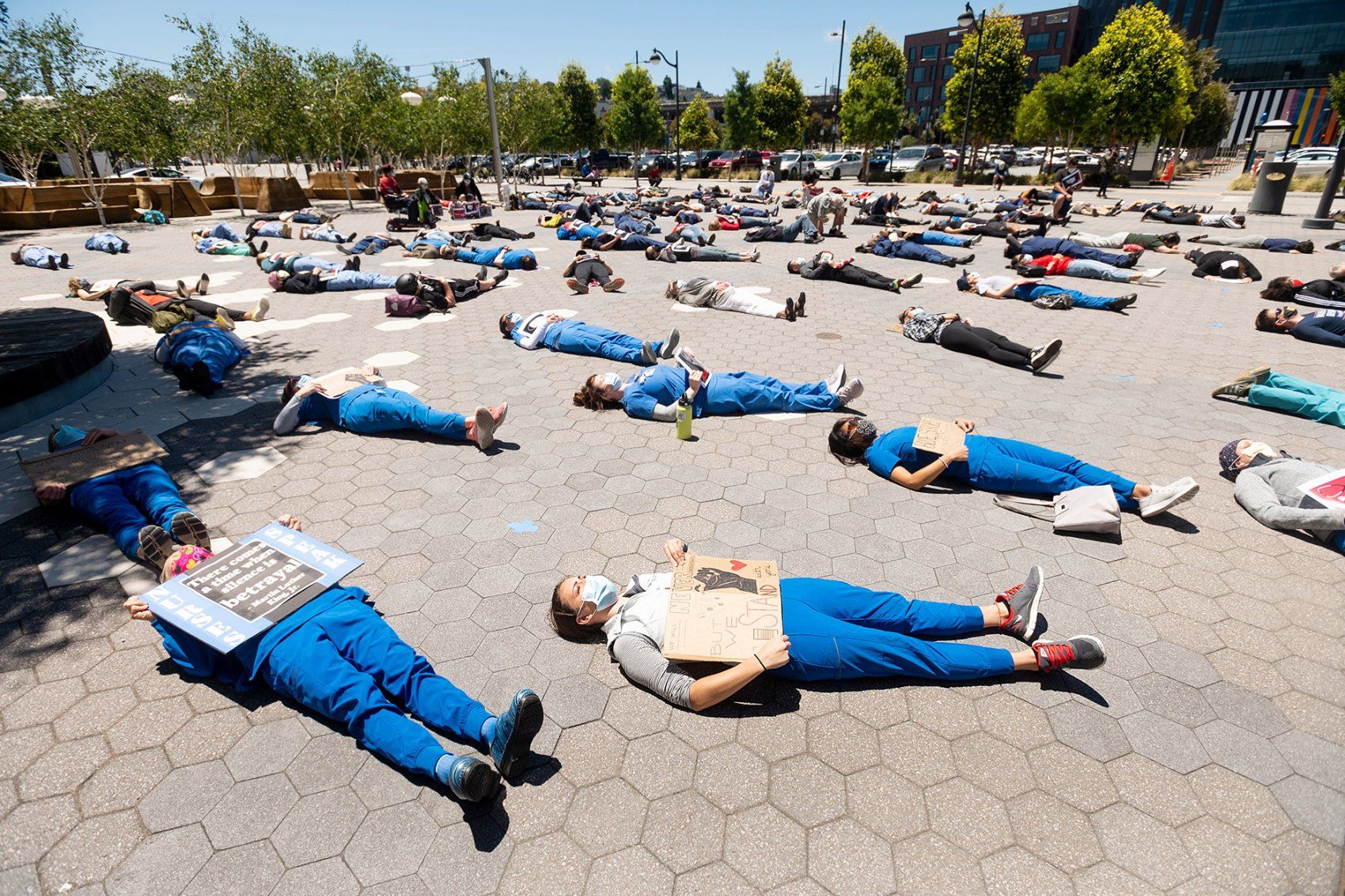 UCSF nurses and others rally at Mission Bay on June 13, including participating in a “die-in.” Photo by Noah Berger

“One in 1,000. That is actually the lifetime risk of an African-American man dying from police violence,” said Kirsten Bibbins-Domingo, PhD, MD, MAS, chair of Epidemiology and Biostatistics and vice dean for Population Health and Health Equity, during the June 5 town hall. “So while the events of this week are very much about the tragic killing of George Floyd, the protest and the response are because that particular event is not an unusual event. In fact, this number itself, makes this for young African-American men, among the leading causes of death in that age group. As those of us who think about causes of death and use that to guide the type of work we do and where we focus our attention, it means that the issue of police violence in African-Americans and police violence in general must be something we think about from a public health perspective.”

The UCSF Office of Diversity and Outreach has compiled a list of resources for people to engage in anti-racism work and practice solidarity.

Others have reinforced the need for active allyship from non-black people and more education about anti-racism.

“Trainees of color are always on display, we're always exposed and the light that shines on us has never felt so bright as it does right now,” Edward Miller, MD, clinical fellow in maternal-fetal medicine, said during the United for Justice and Equity Virtual Town Hall co-hosted by the Office of Diversity Outreach and the School of Medicine. “We need you to step in front of us sometimes and take some of it for just a minute and be your own teachers on racism and advocacy for just a moment while we stitch ourselves back together. Words matter, but so does silence and the balance between the two is not for me to teach you, it's for you to learn, so I need you to show up and show out for us.”

And others recalled their personal experiences of racism.

“Every time I see a black person killed by police on video, I’m reminded that it could have been me. I could have been George Floyd, or Breonna or Ahmaud, Michael, or even Oscar Grant,” said Neil Powe, MD, MPH, MBA, professor and vice chair of medicine at Zuckerberg San Francisco General Hospital and Trauma Center. “When I was 16, one of my recreational outlets was playing basketball near my neighborhood in Philadelphia. One day, while returning home from the courts, a police car pulled up quickly near the sidewalk where I and my best friend were walking. Two officers jumped out, weapons out and told us to put our hands on the top of the car. They then proceeded to frisk us while asking, ‘Why are you in this neighborhood?’ I was 50 feet from my house. One wrong move and it could have been me.”

In closing the June 5 town hall, Mark Laret, president and chief executive officer of UCSF Health, expressed a note of optimism that this is the beginning of long-delayed change. “We have a particularly acute problem that has been highlighted in this community in the most sad way via the tragic murder of George Floyd,” he said. “And this is our moment to highlight the plight of Black Americans and the long history of racism in our country.”