Five years after more than 100 UC San Francisco medical students held a protest on the Parnassus Heights campus to raise awareness of – and compel action on – health care disparities, structural racism, and police violence, the impact of the White Coats for Black Lives Die-In continues to be felt throughout UCSF.

“We were able to mobilize hundreds of medical students across the country to take action and speak up to say racism and police violence are public health epidemics and disasters,” said Olivia Park, a fourth-year medical student and part of the Program in Medical Education for the Urban Underserved (PRIME-US).

In 2014, students organized the White Coats for Black Lives Die-In because they were troubled by grand jury decisions to not indict white police officers who were involved in the deaths of two unarmed African-American men – Michael Brown in Ferguson, Mo., and Eric Garner in New York City. The protest sparked a movement of medical students across the country who, wearing their white coats, commemorated the loss of life and called for institutional change.

Joining the protest made Park grateful to be a part of the UCSF community and reaffirmed why she came to medical school: to address systemic and chronic health issues.

Jazzmin Williams, a second-year medical student, also in the PRIME-US Program, and a member of the UCSF chapter of White Coats for Black Lives, an organization that strives to disrupt systemic racism and its effect on the health of communities of color, said the die-in and the institutional support for the movement contributed to her decision to attend UCSF for medical school.

“I wanted to be a part of a school that shared my values,” she said.

While the ongoing, everyday job of this unraveling continues, the initiatives arising from the die-in have led to the following accomplishments over the past five years:

Since the die-in, White Coats for Black Lives at UCSF has organized courses for seniors at the George W. Davis Senior Center in the Bayview-Hunter’s Point neighborhood of San Francisco, and Williams has worked closely with UCSF leaders and deans to develop anti-racist curriculum for medical students at UCSF. “Eliminating disparities is the crisis that defines the era that I’m training in,” she said.

The die-in was also a watershed moment for diversity, equity, and inclusion (DEI) throughout UCSF. A month after the protest, leaders changed the topic of the annual 150-person leadership retreat – which had taken months of planning – to focus on race and ethnicity.

Shortly thereafter, Differences Matter, a multi-year, multi-faceted School of Medicine initiative designed to make UCSF the most diverse, equitable and inclusive academic medical system in the country, was born.

“The students held a mirror up to us and said, ‘You have to do more than pronounce that you believe in diversity, equity, and inclusion – you actually have to do the hard work to unravel the consequences of structural racism in our society,’” said Catherine R. Lucey, MD, vice dean for Medical Education and executive vice dean for the School of Medicine. “In my 30-year career, I can’t think of a more impactful event than the White Coats for Black Lives die-in and the work that came subsequently.”

Meshell Johnson, the director of faculty diversity in the Department of Medicine, agrees that the student movement, and subsequent programming and commitment, has helped create a more inclusive climate at UCSF. “In my time at UCSF I’ve never really seen the campus galvanize and work towards something as much as I’ve seen them work toward this effort,” Johnson said. “I think that faculty are being intentional in the choices they make, whether they are building a curriculum, or selecting new faculty for different positions.”

“If we want to continue to be a top-tier institution then we need to have diversity of people, thought, and approaches,” Williams said. “That only happens when we have diversity amongst our ranks – our students, our staff, our residents, our fellows, and the entire medical center. It’s a concept that’s not limited to students and should be reflected in the entire workforce.”

“UCSF leaders are continuing the work to make DEI an essential part of the fabric of the institution. DEI should become just as essential to our success as is quality or safety in the health care environment,” Lucey said. “We’re spending a lot of time over the next year to create systems and structures that will allow this work to continue, even when the Differences Matters initiative itself takes on a different shape or morphs into something else.” 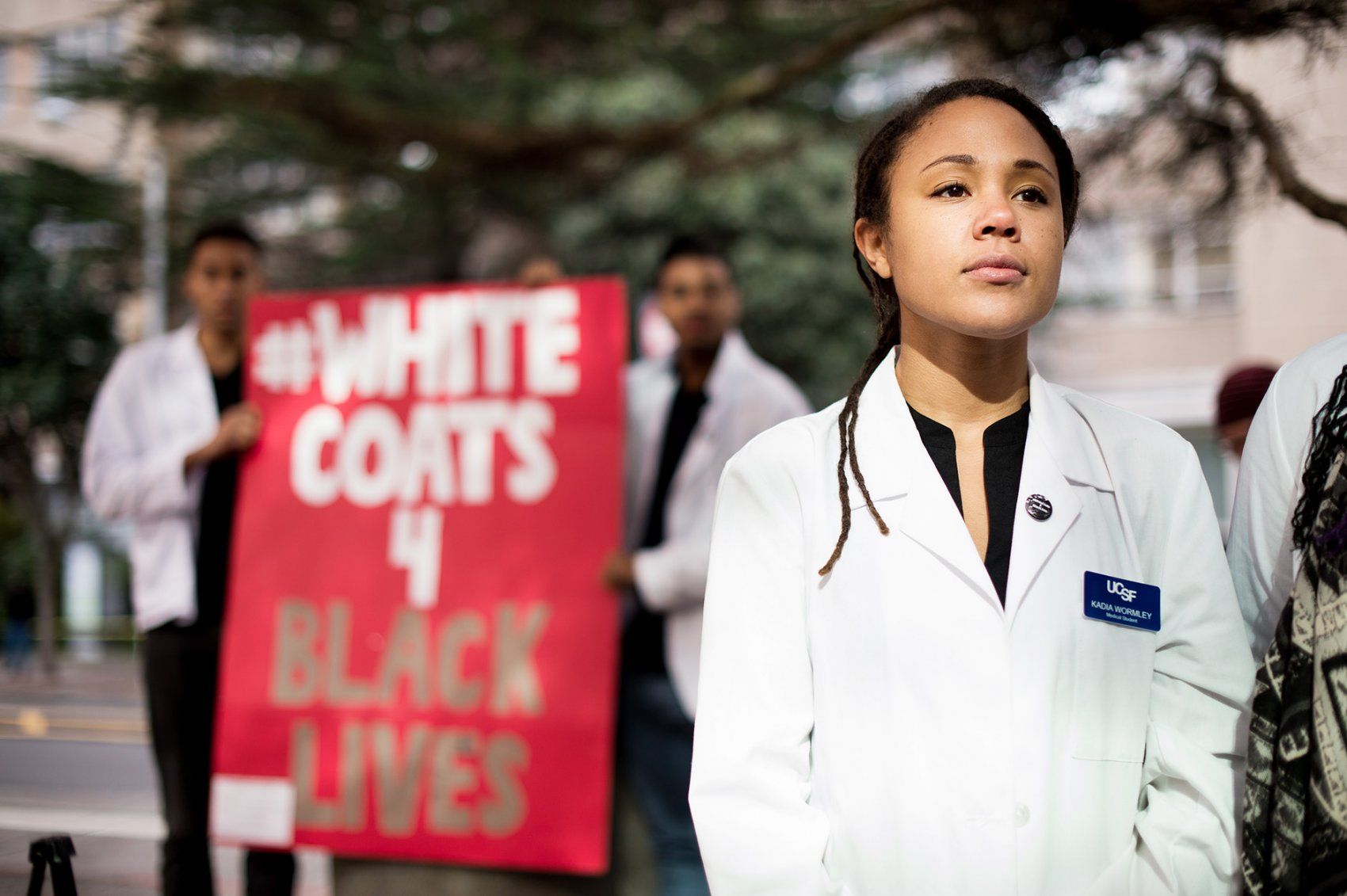 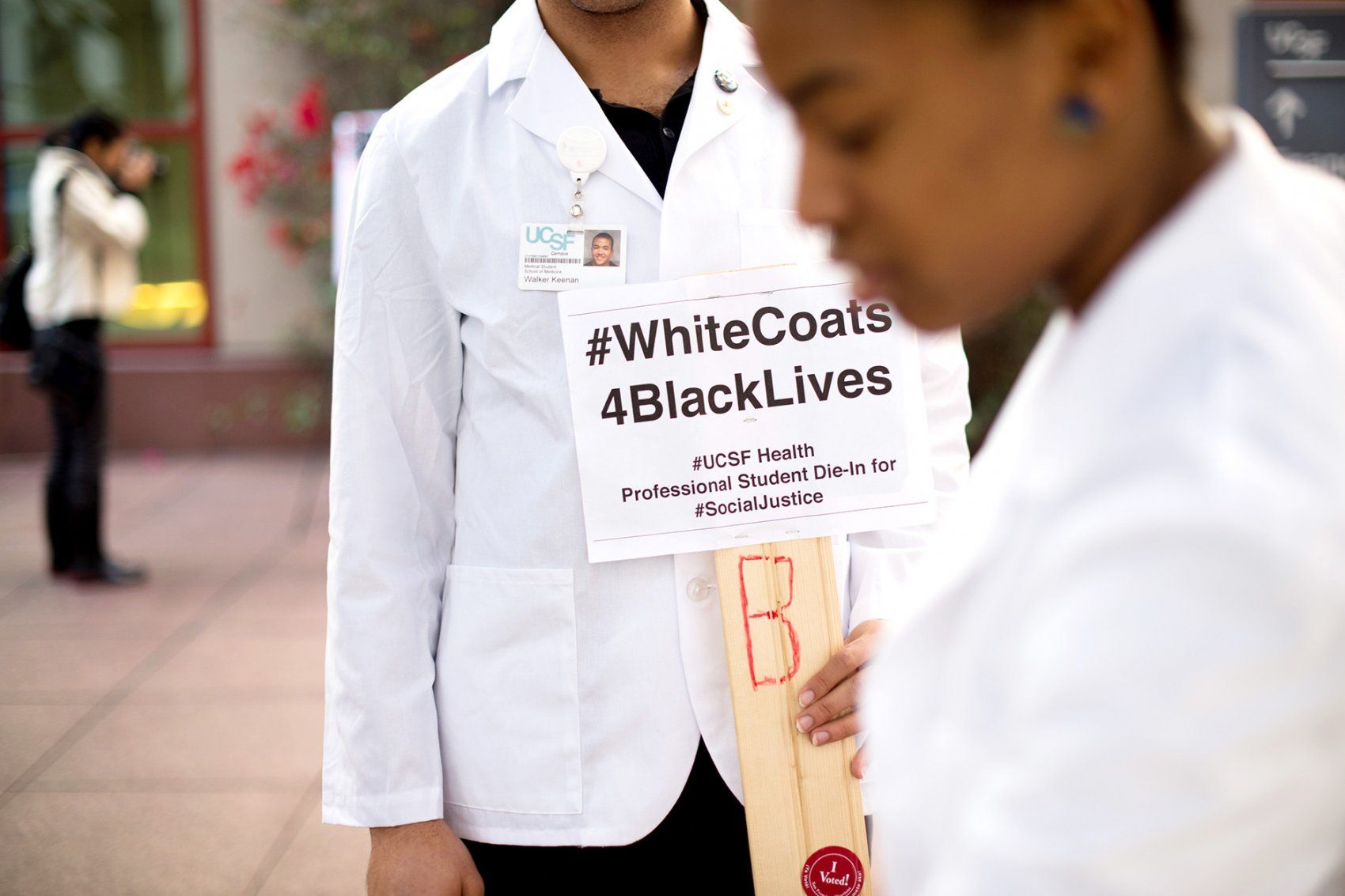 UCSF students, faculty and administrators attended the White Coats for Black Lives one-year anniversary rally on Dec. 10, 2015, outside of the library on the Parnassus Heights campus. Photo by Noah Berger 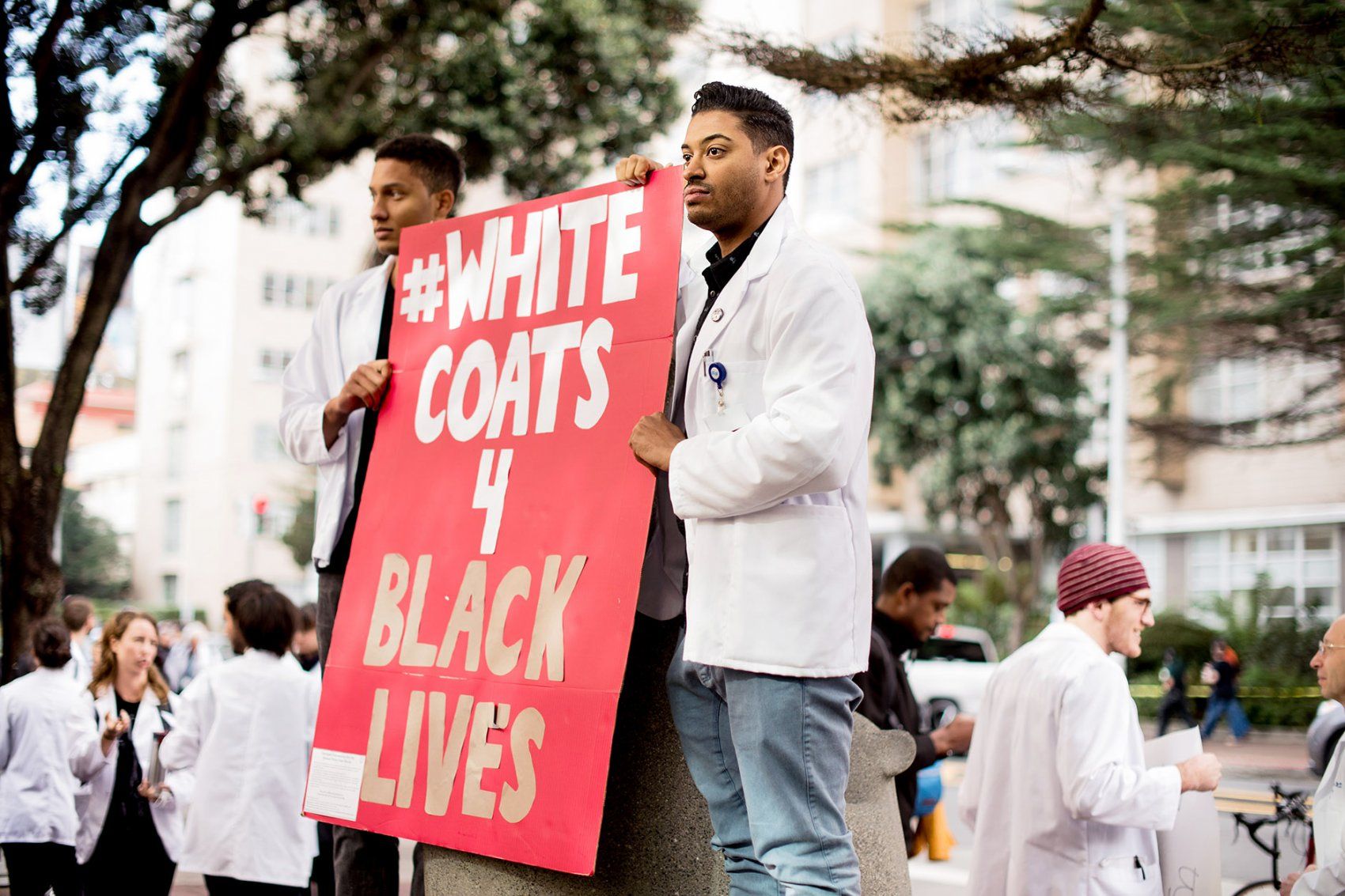 While everyone is responsible for upholding the values of DEI, people with added expertise should be celebrated in real and meaningful ways – for example, through the tenure process or staff advancement programs. “We should make it as essential to our academic work as research and education,” Lucey said.

In the next five years, Williams would like to see UCSF have educators and students who are reflective of the diversity of the patient population and who are educated in a way that actively combats adverse health outcomes that are the direct result of discrimination. “To treat the whole person, you can’t just focus on the physiology, but you have to focus on the social context,” Williams said.