Twenty-two years ago, the possibility of using immunotherapy to treat cancer was just being demonstrated in mice. Now the therapies are showing dramatic success in thousands of human patients and have just been acknowledged with a Nobel Prize.

Researchers at UC San Francisco and elsewhere are working to move immunotherapy beyond cancer to find ways that numerous diseases could potentially be treated by harnessing the immune system.

On Oct. 1, the 2018 Nobel Prize in Medicine or Physiology was awarded to James P. Allison, PhD, of the University of Texas MD Anderson Cancer Center, and Tasuku Honjo, MD, PhD, of Kyoto University, for the groundbreaking research that spurred the development of the class of cancer immunotherapy drugs known as checkpoint inhibitors.

“Allison and Honjo showed how different strategies for inhibiting the brakes on the immune system can be used in the treatment of cancer. The seminal discoveries by the two Laureates constitute a landmark in our fight against cancer,” the Nobel Committee said in a statement.

Matthew “Max” Krummel, PhD, led several of the key studies now being awarded with the Nobel prize as a graduate student in Allison’s UC Berkeley lab. At UCSF since 2001, Krummel says Allison’s mentorship has decisively shaped his career as an immunologist, especially Allison’s encouragement of out-of-the-box, curiosity-driven thinking about immunology’s therapeutic promise.

This emphasis on tackling problems from new perspectives has spurred Krummel to lead a new initiative at UCSF that is looking to shed light on the role of the immune system in a wide range of human diseases.

Cancer immunotherapy, a rapidly advancing strategy to treat tumors, relies on leveraging our immune system’s ability to identify and attack foreign bacterial or viral invaders within the body and to dispose of the body’s own defective cells.

Though the idea of harnessing the immune system to fight cancer is more than a century old, the field had largely languished for decades, until advances in biology made it possible to precisely manipulate the behavior of immune cells.

Cancers can often elude our normally strong immune defenses by expressing proteins called “checkpoints” that instruct immune cells to switch off. But during the 1990s, researchers discovered that, by using antibodies that block the checkpoint proteins, it is possible to release these brakes on the immune system.

In 1994, Jeffrey Bluestone, PhD, and colleagues at the University of Chicago’s Ben May Institute for Cancer Research published the results of pioneering experiments demonstrating the key role of an immune cell protein called CTLA-4 in dampening the immune response – and showed that targeting this protein with an antibody could remove these brakes on immune activity. Bluestone is now the A.W. and Mary Margaret Clausen Distinguished Professor at UCSF and the founding president and CEO of the Parker Institute for Cancer Immunotherapy.

During that same period, Allison, Krummel, and colleagues at UC Berkeley were amassing similar evidence about CTLA-4’s immunity-suppressing role, which they published the following year.

Then, in 1996, Krummel and Dana Leach, PhD, an Allison lab postdoctoral researcher, published a study in Science showing that cancers engage CTLA-4 to escape immune surveillance, and that blocking CTLA-4 with a specially designed antibody caused dramatic shrinkage of tumors in mice.

“The community of cancer biologists was not convinced that you could even use the immune system to alter cancer’s outcome, because cancer was too much like self,” Krummel said in UC Berkeley’s Nobel Prize announcement on Oct. 1. “The dogma at the time was, ‘Don’t even bother.’ What was heady about the moment was that we didn’t really listen to the dogma, we just did it.”

The University of California, along with Allison, Krummel and key collaborators were eventually awarded a patent for the Allison lab’s CTLA-4 antibody treatment strategy, which later spawned the blockbuster drug ipilimumab (Yervoy).

Ipilimumab was first evaluated in humans, for the treatment of prostate cancer, when Allison – who was then also an adjunct member of UCSF’s rapidly evolving cancer center – began working with the biotech startup Medarex and collaborating with Eric J. Small, MD, at UCSF. In 2000, Small led the first human clinical trial of ipilimumab, which had been formulated by Medarex. Bristol-Myers Squibb acquired Medarex in 2009.

Since then, ipilimumab and other checkpoint inhibitors have had unprecedented successes and are now approved for the treatment advanced melanoma and certain types of lung cancer, kidney cancer and colorectal cancer.

Krummel is now a professor and Robert E. Smith Endowed Chair in the Department of Pathology and member of the UCSF Helen Diller Family Comprehensive Cancer Center. He now spearheads the recently launched UCSF Bakar ImmunoX Initiative, a new cross-department effort to shed light on the role of the immune system in a wide range of human diseases, in hopes of bringing new forms of immunotherapy to millions of additional patients. 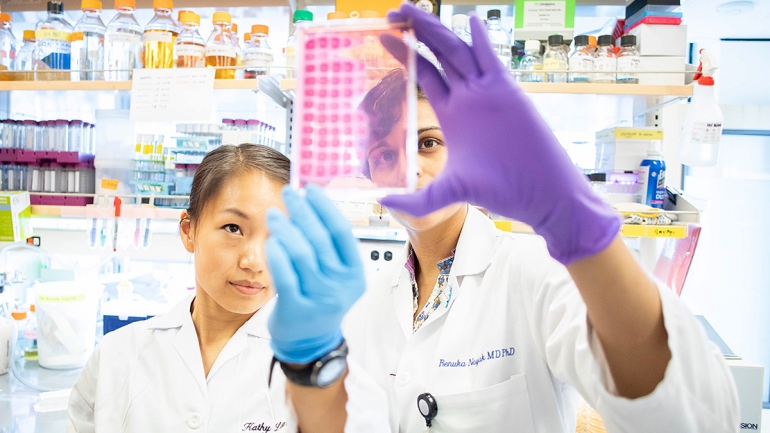 The initiative is a cross-department effort to shed light on the role of the immune system in a wide range of human diseases, in hopes of bringing new forms of immunotherapy to millions of additional patients.

“The transformation of our basic immunological insight into CTLA-4 biology in the Allison lab into a cure is a model for how science should be applied,” Krummel said. “It’s a model on which we’ve based the UCSF ImmunoX program. We believe that by harnessing our collective wisdom under this radical collaboration, we’ll gain traction with many more diseases.”

The initiative was inspired by a growing recognition that immune cells throughout the body use common tools and programs to respond to many different situations. These include deciding whether to fight off a viral infection or merely contain it when a full response could damage sensitive tissues, or recognizing which bacteria pose a threat and which are helpful and beneficial to the organism’s health.

“We are coming to understand the immune system as the adjudicator of all tissue, the peacemaker as well as the destroyer,” Krummel said at the time of the ImmunoX announcement.

As Krummel and others look to the future of immunology, he says it is worthwhile to remember the people who can benefit now and in the future.

“As exciting as it is to see this field recognized by a Nobel Prize,” Krummel said, “it’s even better to think of the patients that have been – and could be – saved with treatments that emerged from basic, curiosity-driven science.”