He smiles often as he explains how the body’s own immune system – long thought to be an ineffective slacker when it comes to combatting established tumors – now is being boosted or retrained by new drugs to more effectively engage tumor cells. In some cases, patients with advanced cancer who were expected to die quickly have been living with their cancer in check for years after immunotherapy treatment.

Today’s new immunotherapies are changing the paradigm for how we treat patients with cancer.

Fong, an early proponent of immunotherapy, now is leading UCSF’s newly launched Cancer Immunotherapy Program, which includes a clinical arm, the UCSF Cancer Immunotherapy Clinic. Located at the UCSF Medical Center at Parnassus Heights, the recently renovated, dedicated space is linked to the long-standing clinic for recipients of bone marrow transplants, which have been used for decades to treat blood cancers.

“Today’s new immunotherapies are changing the paradigm for how we treat patients with cancer,” Fong says. “I believe they will prove valuable in treating many, if not most, types of cancer. In the context of clinical trials, we aim to provide access to novel immunotherapies that patients otherwise would not have access to.”

Fong established the program with funding from the UCSF Helen Diller Family Comprehensive Cancer Center. Now they are seeking companies, foundations and other potential partners to support the development and testing of innovative immunotherapy treatments.

Fong’s early work in immunotherapy involved enrolling patients with urologic cancers in early-stage clinical trials for what later became the first FDA-approved “checkpoint inhibitor,” a class of drugs that releases the brakes on the immune system, allowing immune cells to drive ahead to battle cancer.

That first FDA-approved checkpoint inhibitor, called ipilimumab (Yervoy), a valued treatment for many advanced cases of melanoma, was initially developed and tested in patients by UCSF-affiliated physicians and scientists. Checkpoint inhibitors now are approved to treat not only melanoma, but also certain types of lung and kidney cancer, and new generations of checkpoint inhibitors also are being evaluated in many cancer types.

Today, besides treating patients with urologic cancers, Fong is busy hiring staff, planning for first-in-human studies of novel drugs and enlisting additional UCSF specialists across the gamut of cancer types to identify opportunities for their own patients to receive immunotherapy in clinical trials.

“We need better cancer treatments that give people long-term remissions or even cures, and immunotherapy certainly merits the investment we are making,” says Alan Ashworth, PhD, FRS, president of the Diller Family Comprehensive Cancer Center. “For some, immunotherapies already are life-savers, and we are excited to explore ways to tailor immunotherapies for each patient – the essence of precision medicine for cancer.”

Robert Thistle, 70, who is battling metastatic kidney cancer, has lived in the same peaceful, rural home for more than four decades amid tall, 130-year-old redwood trees about 70 miles north of San Francisco. It was from this location that a happy coincidence led Thistle to Fong and a clinical trial that would change his life.

At early stages, kidney cancer rarely causes symptoms, and it often spreads to other organs before it is detected, a situation few survive for long. More than a decade ago, Thistle was diagnosed coincidentally when he received an imaging exam for a comparatively minor gastrointestinal complaint. It appeared that the surgical team was able to remove the whole tumor. Then in 2012, a bone metastasis was discovered in his upper arm, and also apparently successfully treated, but two years later, tumor nodules were discovered in his lungs.

While Thistle, concerned about anticipated drug side effects, was sitting in his oncologist’s Santa Rosa office inquiring about alternatives to standard treatment, Fong called the doctor to ask about potential candidates for a clinical trial.

In January 2015, Thistle started a new treatment at UCSF. He first was given an experimental Roche checkpoint inhibitor drug now called atezolizumab. With only that treatment, the nodules grew a bit, although slowly, and their growth made Thistle eligible to enter another arm of the study. Participants of that part of the study receive bevacizumab (Avastin), a commercially available treatment that targets blood-vessel growth in tumors, as well as the experimental drug. By August, the nodules had shrunk to below their original size.

“I want to live,” Thistle says, and he appears to be doing a good job of it: Though nominally retired, he still assists with grape pressing and putting wine into barrels and bottles at Woodenhead winery in the Russian River Valley; he grows a cornucopia of organic vegetables in a home garden plot that’s bigger than four typical San Francisco lots; he plays percussion in a samba band – and he dances the samba with his girlfriend.

“I try to be more alive in each moment,” he says. At least for now, the disease appears to be under control, with regular trips to San Francisco for immunotherapy infusions. Thistle dances on.

In addition to leading studies of checkpoint inhibitors, researchers at the Cancer Immunotherapy Clinic are investigating other immunotherapies. Those include cancer vaccines, which target cancer-specific molecules and boost the immune system’s ability to recognize and destroy tumors, and cellular therapies, in which the patients own immune cells are genetically manipulated to better target cancer, grown to substantial numbers in the lab and infused back into the patient. 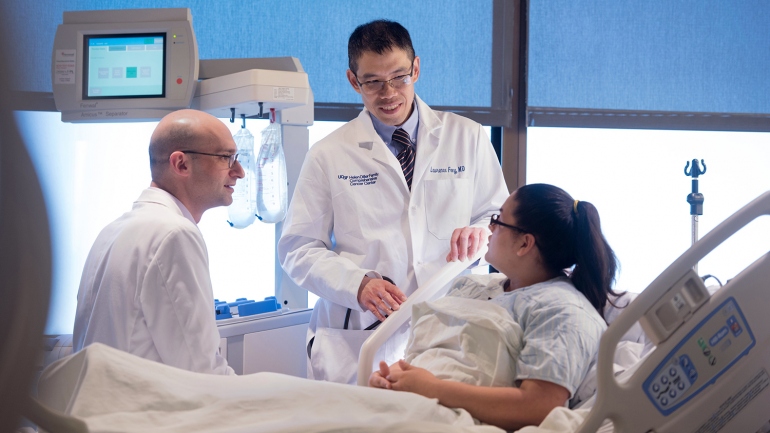 Learn More About the Clinic

The new UCSF Cancer Immunotherapy Clinic provides patients and their families with access to cutting-edge cancer immunotherapies, treatments aimed at harnessing a patient's own immune system to fight cancer.

In 2010, the cancer vaccine Provenge became the first to be approved to treat any cancer. It was approved for the treatment of prostate cancer, following early studies led by Fong and UCSF oncologist Eric Small, MD.

At the forefront of cellular therapies under development are chimeric antigen receptor T cells, or CAR T cells. The initial application and greatest success to date for CAR T cell therapy has been in acute lymphoblastic leukemia (ALL), for which remission rates appear to be greater than 80 percent for difficult-to-treat relapsed or refractory cases. Through the UCSF Cancer Immunotherapy Program, in conjunction with the bone marrow transplant program, CAR T clinical trials are available to patients with leukemia, lymphoma, brain cancer and pancreatic cancer. Trials for other tumor types are anticipated.

Lewis Lanier, PhD, the chair of immunology and a leading cancer immunologist at UCSF, is the director of the UCSF site for PICI, and Fong is co-director and medical director.

The Cancer Immunotherapy Program team includes Joanne Otani, who many years ago was a toxicologist and was moved to change careers after her nephew died from a pediatric blood cancer. She became a nurse and later the research nurse manager of a bone marrow transplant program, before coming to UCSF in February to become program manager for the Cancer Immunotherapy Clinic, invigorated by the chance to help launch a new program.

“Participants want to benefit, but many also are altruistic,” she says. “I feel great respect for their trust in us as health care providers, and for their hope that what they are doing today will benefit others tomorrow.”

The teamwork between laboratory and clinical researchers ensures that a steady stream of clinical trial data will be analyzed to gain new insight into how the immune system interacts with cancers and with new immunotherapies, and is expected to lead to more effective and safer treatment regimens, to more powerful combinations of drugs and ultimately to entirely new drugs, according to Fong.

“We need to learn much more about how immunotherapy works, and about the immune system as a whole,” he says. “A better understanding may make it more likely that we will discover new treatments that are not specific to just one type of cancer, but that instead could potentially be used to treat all cancers.”