Yervoy is unlikely to win a contest for best named drug, but recent US Food and Drug Administration (FDA) approval for the new entrant in the battle against cancer marks the success of a novel treatment strategy, and is another indicator that immunotherapy has gone mainstream. 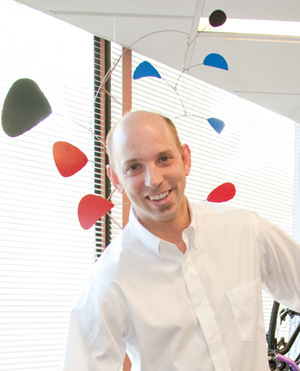 Matthew "Max" Krummel, PhD – once a graduate student at UC Berkeley and now a faculty member at UCSF – is among the researchers to contribute both to the basic science discoveries and to clinical testing of a new cancer drug.

UCSF researchers and oncologists have played a key role in developing and testing immunotherapies that enhance the body’s own immune response. These include Yervoy – which releases the brakes that hold back the immune system from fighting cancer – and Provenge, which in 2010 became the first vaccine approved to treat any cancer. Provenge was approved for the treatment of prostate cancer, following early studies led by UCSF oncologist Eric Small, MD.

Yervoy’s generic name is ipilimumab, which doesn’t exactly roll off the tongue, either. More impressive is the fact that in phase III clinical trials with malignant melanoma patients for whom prior treatments had failed, the drug shifted median survival time from six months to 10 months. This marks the greatest treatment advance in more than a decade for what has been a very difficult-to-treat disease.

The FDA approved the sale of Yervoy in March. That same month, the manufacturer Bristol-Myers Squibb announced preliminary results of another phase III study – this time with previously untreated melanoma patients with advanced disease. Treatment with a combination of the chemotherapy drug dacarbazine and ipilimumab resulted in a longer average survival time than treatment with dacarbazine alone, according to the company.

Ipilimumab is an antibody that targets a key molecule found on certain cells of the immune system. The treatment strategy behind the drug’s development evolved directly from fundamental biological research on how the immune system works. UCSF researchers contributed both to the basic science discoveries and to clinical testing, and they continue to evaluate ipilimumab for the treatment of prostate cancer.

Revving Up Immune System by Releasing the Brakes

The immune system revs up and winds down in response to the appearance and elimination of microscopic foreign invaders within the body. However, established cancers fail to arouse an immune response adequate to vanquish the abnormal tumor cells. Ipilimumab releases the brakes on the immune system, so that it can become active and attack tumor tissue.

The immune system’s foot soldiers in the battle against specific disease pathogens are the T lymphocyte cells. T lymphocytes are stimulated to fight disease when receptors on their cell surfaces bind to molecular pieces – called antigens – from the pathogen. The antigens must first be captured and displayed by other immune cells: the macrophages and dendritic cells. 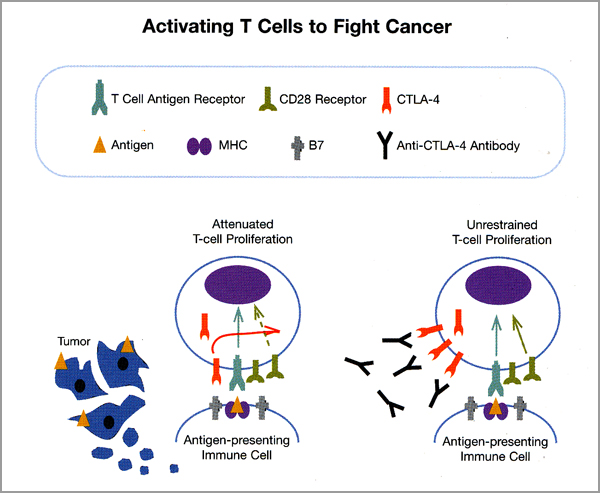 The immune system's "T cells" target microscopic disease invaders. First, other cells of the immune system dock with them -- via interlocking cell-surface receptors. The docking immune cells present the T cells with evidence of the invasion in the form of a protein fragment from the pathogen, called an antigen. However, in cancer, a molecule called CTLA-4, which normally ratchets down the immune response as infection wanes, appears to block the immune response against tumor-cell antigens before the response has a chance to become effective. An antibody against CTLA-4, now marketed as the drug Yervoy, overcomes this block.

But Allison had also identified a molecule, called CTLA-4, which competes with CD28 to bind to B7, thereby inhibiting T lymphocyte activation. In other words, CTLA-4 acts like a brake.

As a graduate student working in Allison’s lab, Max Krummel, PhD – now a faculty member at UCSF – succeeded in making antibodies targeting CTLA-4. Allison encouraged Krummel’s interest in conducting a range of experiments, including investigations of the effects of the antibody in mice with tumors. The researchers discovered that the antibody had anti-tumor effects.

Further experiments by Allison’s team led to the University of California being awarded a patent for the CTLA-4 antibody treatment strategy in 1998. Ipilimumab was first evaluated in humans for the treatment of prostate cancer after Allison – also a member of UCSF’s rapidly evolving cancer center – began working with the biotech startup Medarex and collaborating with Small at UCSF. In 2000, Small led the first human clinical trial of ipilimumab, which had been formulated by Medarex. Bristol-Myers Squibb acquired Medarex in 2009.

Allison was initially concerned that an antibody against CTLA-4 might cause autoimmune responses by “breaking” the body’s tolerance for some of our own normal proteins. He suggested that this treatment approach might best be used initially as an aid in targeting proteins within tissues that are not essential to life, as in malignant melanoma or advanced prostate cancer.

In fact, ipilimumab now carries a boxed warning on its packaging. In clinical trials, about 13 percent of patients experienced severe – and, in rare cases, fatal – autoimmune reactions.

Clinical trials of Yervoy are ongoing to combat other deadly cancers. UCSF oncologists have continued to participate in trials to treat cases of advanced prostate cancer in which standard anti-hormone therapy has failed. Urologic oncologist Larry Fong, MD, led a combined phase I-phase II trial to evaluate the combination of ipilimumab with another immunotherapy called GM-CSF. Encouraging clinical responses in that study have led to worldwide phase III trials.

Allison eventually left the University of California to go to the Memorial Sloan-Kettering Cancer Center, where he continues his research as head of the immunology department. At UCSF, Krummel studies the immune system and the phenomenon of tolerance, using innovative imaging techniques to explore spatial aspects of immune responses throughout the body.

Krummel says that he tries to follow Allison’s example by encouraging his own graduate students when they show initiative in conceiving new experiments, even when the likelihood of success does not appear great.

“From my own standpoint,” Krummel says, “it is this type of outcome that drives our current investigations and thinking – knowing that what-if experiments really can translate a basic science project into a treatment for an illness.”