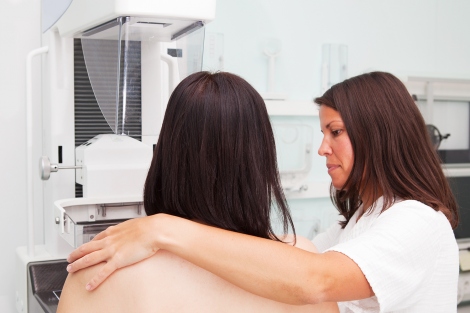 Follow-up imaging for women with non-metastatic breast cancer varies widely across the country, according to a new study led by researchers at UC San Francisco. Some patients go without the annual mammograms that experts recommend, while others with the same cancer diagnosis receive full-body scans that expose them to significant amounts of radiation and are not recommended by experts.

Researchers said they could find no patterns in the data to explain the variation in care, but they suspected that it reflected differences in the common practices adopted by particular hospitals or physician groups. Full-body scans are expensive, costing between $2,000 and $8,000, and can be burdensome for patients who have high-deductible insurance policies that expose them to annual health care costs of $6,000 to $8,000 a year.

“With skyrocketing medical costs, patients are having to take greater and greater responsibility for out-of- pocket expenses,” said UCSF’s Benjamin Franc, MD, MS, MBA, a professor in the Department of Radiology and Biomedical Imaging, the Center for Healthcare Value, and the Philip R. Lee Institute for Health Policy Studies. “These patients already have cancer, so you don’t want to induce another cancer with radiation from unnecessary imaging.”

The study, published Friday, July 13, 2018, in JNCCN: Journal of the National Comprehensive Cancer Network, examined data on 36,045 women aged 18 to 64 who had surgery for cancer in one breast between 2010 and 2012. To limit the group to patients with non-metastatic disease, the researchers excluded women who received chemotherapy in the first 18 months after their surgery. The data came from the Truven Health MarketScan Commercial Database and included information for all the metropolitan statistical areas (MSAs) in the country.

Guidelines from the American Society of Clinical Oncology and the National Comprehensive Cancer Network recommend that women with non-metastatic breast cancer should receive annual physical exams and mammograms, but not full-body imaging with such technologies as computed tomography (CT), magnetic resonance imaging (MRI), positron emission tomography (PET), or bone scans.

The researchers looked at an 18-month period, rather than a year, to allow time for patients to have completed any radiation therapy. They found that patients were more likely to receive recommended breast imaging within 18 months of surgery if they were younger or received radiation therapy. But the next most significant predictor was the patient’s MSA. The biggest predictors of whether patients received PET imaging, which is not recommended, was the type of surgery, followed by MSA.

About half of the lowest-risk patients—those who received only surgery—received the recommended mammography within 18 months of their initial treatment. And between 64 and 70 percent of patients who had received a mastectomy and radiation, and were presumably higher risk, received some sort of breast imaging, either mammography or breast MRI. But, depending on where they lived, between 18 and 46 percent of patients received high-cost tomographic imaging within 18 months of their surgeries.

“Age and therapy make sense as predictors of breast imaging, but it doesn’t make sense that where you live makes a difference in whether you were likely to get a follow-up mammogram or high-cost imaging,” Franc said. “What’s actionable here is that we have these guidelines, but doctors aren’t following them.”