Each year, 300,000 infants worldwide are born with a genetic disease that warps the shape of their red blood cells, which break apart and fail to deliver life-giving oxygen, or pile up in tiny blood vessels and result in episodes of severe pain, swelling of hands and feet, organ damage, and delayed growth.

“We hear a lot about the moonshot for curing cancer, but a moonshot for curing sickle cell disease should also be possible,” said Mark Walters, MD, a pediatric hematologist and oncologist and director of UCSF Benioff Children’s Hospital Oakland’s Blood and Marrow Transplantation Program. “Sickle cell disease was the first genetic disease that was discovered, and wouldn’t it be great if it is also the first one we can cure in everyone?”

Sickle cell disease was the first genetic disease that was discovered, and wouldn’t it be great if it is also the first one we can cure in everyone?

Walters is helping to bring a cure closer to reality. He and his colleagues at UCSF Benioff Children’s Hospitals in both Oakland and San Francisco are at the leading edge of advancements in bone marrow transplantation, gene therapy and cutting-edge CRISPR-Cas9 gene editing technology to cure sickle cell disease.

Treatment of sickle cell disease currently focuses mostly on preventing and reducing complications, through antibiotics, transfusions and the drugs hydroxyurea and glutamine.

“The drugs currently available to treat sickle cell disease have definitely extended the lifespan of patients, but they don’t work in everybody and they are certainly not a cure,” said Walters.

Sickle cell disease is a hereditary disorder caused by a defect in a gene that makes hemoglobin, a critical protein in red blood cells that carries oxygen throughout the body. The abnormal hemoglobin causes red blood cells to be shaped as a sickle, rather than round. The misshapen red blood cells break apart easily and block blood vessels. These changes lead to anemia, severe pain, and organ damage that can lead to early death.

“Sickle cell and thalassemia [another red blood cell disorder] have been affecting millions of children for centuries,” says Elliott Vichinsky, MD, principal investigator at Children’s Hospital Oakland Research Institute and chief of the division of Hematology/Oncology at UCSF Benioff Children’s Hospital Oakland. “Only in the last 25 years, scientists have advanced tremendously their understanding of these illnesses, their ability to care for the kids they affect and their ability to deliver cures.”

For decades, Walters has been refining the technique for bone marrow transplantation to cure sickle cell. The premise is that since red blood cells come from stem cells produced in the bone marrow, if the faulty stem cells making sickle cells could be replaced with those from healthy donors, the disease could be cured.

UCSF Benioff Children’s Hospital Oakland’s Comprehensive Sickle Cell Center houses the world’s only not-for-profit Sibling Donor Cord Blood Program, and Walters’ past studies have shown that most of the time, children with severe disease can be cured if there is a perfect match from a sibling or other donor.

UCSF Benioff Children’s Hospital Oakland clinicians and researchers are involved with global health initiatives that aim to improve screening and early care for children worldwide who are born with sickle cell disease.

Read More About the Work

One clinical trial that Walters is helping lead – sponsored by the National Institutes of Health and including several medical centers nationwide – uses a new protocol for bone marrow transplantation that would vastly widen the number of potential donors by using children’s parents as donors. Since a child’s genetics are a combination of both parents, a parent and child are never a perfect match for transplantation, but Walters and others have developed methods for improving the technique for sickle cell disease using unmatched donors.

With about a dozen patients already enrolled nationally in this multi-center study, Walters said the first results look promising.

“Almost all patients could have a transplant with the technique we are testing,” he said.

His other NIH-sponsored bone marrow transplantation trial is the first study in the U.S. to compare this procedure to standard treatment in adults with sickle cell disease. Cumulative damage to vital organs, including the heart, lungs, liver and kidney, puts adults at risk for sudden death, reducing the lifetime survival rate of someone with the disease by decades.

“This trial will tell us for the first time if a transplant is the same or a better treatment than what patients normally receive,” said Walters.

Walters is also tapping into advancements in science that could allow for treatments at the genetic level. Since sickle cell is caused by a defect in a gene, correcting that gene could lead to a cure.

One clinical trial Walters is leading at UCSF that takes this approach involves a person’s own stem cells – which have the potential to develop into many different cell types. The stem cells are removed from their blood, and then researchers will insert a virus that contains a modified copy of the gene that goes awry and causes sickling of red blood cells. 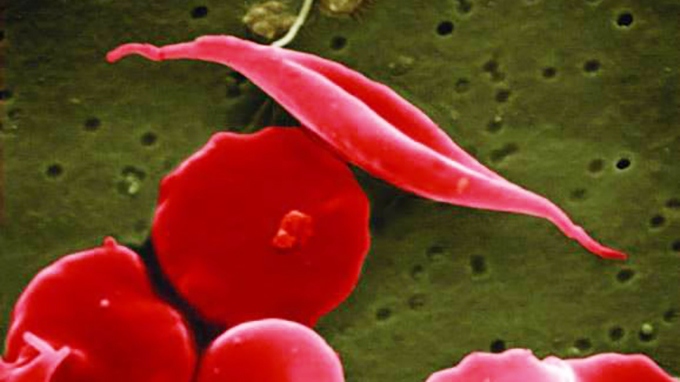 Sickle Cell’s Impact in the U.S.

The exact number of people living with sickle cell disease in the U.S. is unknown, but the Centers for Disease Control and Prevention estimates:

» It occurs among 1 out of every 16,300 Hispanic-American births

» It occurs among 1 out of every 365 African-American births

When the stem cells are reinserted, the hope is that they give rise to healthy red blood cells throughout the body.

Walters said that the researchers in the study, which is sponsored by bluebird bio, are pleased with the results so far, and he is currently meeting with patients with a goal of enrolling four or five patients.

Another trial, sponsored by Bioverativ, will use gene editing therapy to block a protein that could reactivate fetal hemoglobin, the form that is present in babies and which has been shown to reduce or eliminate the complications of sickle cell disease. This trial will begin enrolling patients by the end of the year.

The study that possibly holds the most promise for curing sickle cell disease is one using CRISPR-Cas9 technology, which allows scientists to precisely target and permanently edit genetic information.

In this study, which won’t be enrolling patients until the end of 2019 at the earliest, researchers will remove blood stem cells from sickle cell patients and correct the mutation using CRISPR-Cas9, then return the engineered cells back into the patient.

“In some ways, this trial is most exciting because everybody will have a donor since their own cells are being modified,” said Walters. “It should be much safer than the kind of transplant we do currently.”

Pre-clinical results have shown that 25 percent of stem cells from sickle cell patients can be corrected for the mutation causing the disease, which he said is enough to be considered a cure. For this work, Walters collaborated with David Martin, MD, a senior scientist at Children’s Hospital Oakland Research Institute and chair of the Center for Genetics, and researchers at UC Berkeley and the University of Utah School of Medicine.

“I think it’s space age science that you could actually take someone’s own stem cells, find the mutation, correct in a way that doesn’t damage the cells so you can return them and they can grow healthy cells,” said Walters. “I think our trials are going to offer much-needed options to cure this disease.”

At the Leading Edge of Treating Blood Diseases

Tippi MacKenzie, MD, a pediatric and fetal surgeon at UCSF Benioff Children’s Hospital San Francisco, is conducting the world’s first clinical trial using blood stem cells transplanted prior to birth. By transplanting cells from the mother, this technique could offer a way to bypass rejection by the fetal immune system. Her work is aimed at treating alpha thalassemia, a normally fatal fetal condition.

The clinical trial brings together the unique expertise of both UCSF Benioff Children’s Hospitals. The UCSF Fetal Treatment Center, in San Francisco, is the birthplace of fetal surgery and continues to offer life-saving interventions for fetuses with multiple birth defects. UCSF Benioff Children’s Hospital Oakland established its thalassemia program in 1991 to provide multidisciplinary care to the growing number of thalassemia patients.

Vichinsky, who oversaw the treatment for the first baby born after receiving an in utero stem cell transplant in the clinical trial, said future plans may include using in utero stem cells to treat beta thalassemia, the more common type of the disease, as well as sickle cell anemia and other serious and life-threatening genetic disorders.

“Once-fatal blood diseases can now be managed as chronic diseases,” Vichinsky said. “In utero stem-cell transplantation may take it one step further: to successfully treat blood diseases before birth.”

Gene editing is already providing new therapies for rare diseases that just a generation ago were untreatable. New techniques with CRISPR hold promise for greatly improving both quality and length of life for those suffering from genetic conditions.