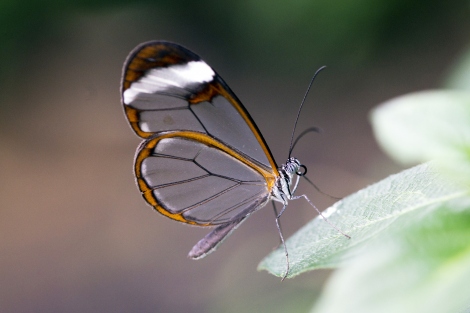 “Sensors based on nanostructures on a transparent butterfly wing may one day help preserve vision in glaucoma patients worldwide,” said co-senior author David Sretavan, MD, PhD, professor of ophthalmology at UCSF, on the study that appeared online April 30, 2018, in Nature Nanotechnology. “The sensor currently is less than a millimeter in size, with the goal of further miniaturization so it eventually can be implanted via a quick, simple procedure in the doctor’s office.”

A leading cause of irreversible blindness, glaucoma affects an estimated three million people in the United States and 70 million worldwide. About 45 percent of patients progress to demonstrable vision loss, and 15 percent eventually lose sight in one eye. The debilitating disease is believed to be manifested as chronically elevated or sudden spikes in pressure inside the eye, which can be remedied through medication, even surgery, if detected early enough.

Microsensor the Width of a Few Strands of Hair

Accurate and detailed information on daily intraocular pressure fluctuations and trends is critical for glaucoma management. However, unlike chronic progressive diseases such as diabetes and hypertension that can be monitored at home, intraocular measurements are typically obtained only two to three times annually during clinic visits due to the need for specialized equipment and trained operators.

In the Nature Nanotechology study, Sretavan and his colleagues tested in rabbits a microsensor shaped like a tiny drum the width of a few strands of hair. When implanted into the eye, its surface flexes with increasing eye pressure, narrowing the depth of the cavity inside the drum. The depth is measured by a reader that can be embedded in a mirror, TV screen, mobile device or other convenient location at home to give an accurate pressure measurement. The sensor has no electrical circuits and does not require or battery power.

Part of the implant’s design came from the longtail glasswing butterfly. Its wings are almost perfectly transparent due to tiny surface microscale features that redirect light striking the wings so that the rays pass through, regardless of the original angle at which they hit the wings. The result is almost no reflection of the light from the wing’s surface.

To get an accurate intraocular pressure measurement, the reader must be almost perfectly perpendicular to the implant surface. By applying the angle-independent optical property of the butterfly’s wings, researchers were able to decorate the implant with similar microscale features the same size and shape using silicon nitride. The resulting surface is long-lasting, nontoxic and prevents harmful cells from attaching and damaging the implant (biofouling).

UCSF and Caltech have worked on the sensing principle for six years, Sretavan said. The sensor design, microfabrication and benchtop validations were performed at Caltech, with pre-clinical work from surgical implantation to long-term sensor testing done at UCSF. The resulting intellectual property is jointly owned by Caltech and the Regents of the University of California.