As part of ongoing efforts to make UC San Francisco a great place to work, UCSF will conduct a survey of all staff to gauge their level of engagement and satisfaction as employees.

All staff are encouraged to express their voices candidly by completing the short confidential survey, which will be open from April 24 through May 15. UCSF’s goal is to hear from all UCSF staff.

“This survey is important for helping us understand the progress toward our shared goal of making UCSF a great place to work,” said Chancellor Sam Hawgood, MBBS. “In order to continue our collective progress, your participation in the 2018 Staff Engagement Survey is essential. The outcomes will inform new institution-wide priorities and will guide individual units in creating future staff engagement plans and goals.”

As the second largest employer in San Francisco, UCSF regularly surveys both faculty and staff to get critical feedback on how employees feel about their daily work, their teams and departments, and the University’s overarching mission.

This is UCSF’s sixth survey of its kind to be conducted by Gallup, known nationally for its data-driven research, to take the pulse of staff members, who make up the majority of its 24,000-strong workforce. Previous staff surveys were conducted in 2011, 2013, 2015 and 2017. Because of the differences in hiring, reviews, compensation and other employment factors, separate surveys are conducted with faculty with the most recent one completed last year.

Gallup will email UCSF staff members an invitation with a personalized link to the confidential and secure survey. The survey should take less than 10 minutes to complete.

Gallup will keep all responses completely confidential. Feedback will be reported anonymously without reference to anyone’s identity. Once the results have been reported and analyzed, UCSF will inform staff about the findings and managers will be asked to take the next steps, along with their teams, to draft and implement action plans.

Over the years, managers and staff have analyzed the Gallup staff surveys to address weaknesses and build upon strengths by developing and implementing action plans across departments and units. These action plans have resulted in a steady increase in UCSF’s overall staff engagement.

For example, with the hope of improving scores in the category “the mission/purpose of my organization makes me feel my job is important,” the executive team in Campus Life Services, led by associate vice chancellor Clare Shinnerl, made connecting CLS staff to UCSF’s advancing health worldwide mission the theme for its annual department retreat. Among the day’s activities was screening a video produced by the CLS executive team that emphasized what a day at UCSF would be like without the division, which includes transportation, facilities, child care, housing, and other units.

And UCSF IT created cross team-building opportunities by rotating a couple of managers through other teams’ meetings to gain deeper understanding of their operations and partnership. This action plan goal highlights how fellow co-workers are committed to quality and gives managers an opportunity to learn and grow. It has helped each of the involved teams understand the projects and impacts that are shared across all of IT.

One of the UCSF-wide efforts to make UCSF a welcoming and supportive place to work is the Great People, Great Place initiative, led by Leeane Jensen, executive director of Wellbeing Operations and Services. In March 2016, more than 30 stakeholders across UCSF gathered at a planning retreat aimed at making UCSF a best place to work, learn, teach and discover. A concept that emerged out of that retreat was to develop and implement an action plan that was subsequently approved by the Chancellor’s Executive Cabinet to improve the culture in three priority areas:

To build on the culture of collaboration in the UCSF community, the campus formally embraced the core PRIDE Values of professionalism, respect, integrity, diversity, and excellence, which were adopted by UCSF Medical Center in 2000.

Late last year, UCSF launched UCSF Recognize, an online platform that empowers all staff to show their appreciation for their co-workers by thanking them for their excellent work, further enhancing a culture of appreciation and engagement.

UCSF is now piloting the use of an internal communications team that enables key communicators representing the campus and UCSF Health to share, synchronize and align messages.

Gallup defines engaged employees as those who are involved in, enthusiastic about and committed to their work and workplace. Research indicates that engaged employees are happier, boost productivity and the fiscal health of their organizations, provide better service and are less likely to leave their jobs, reducing turnover costs.

UCSF has seen steady increases in staff engagement in recent years, with its grand mean score rising between 2011 and 2017. In 2017, UCSF achieved an overall grand mean of 3.93, based on a five-point scale, reflecting an improvement of .07 points from the 2015 score. It represents a marked improvement from 3.60 when the first Gallup survey was conducted at UCSF in 2011. 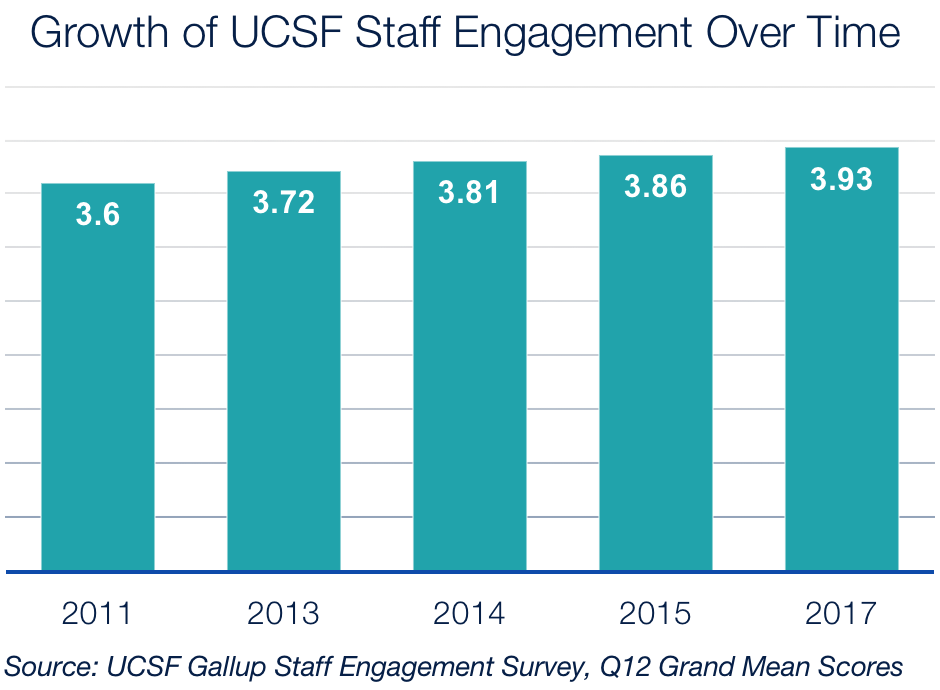 When compared to Gallup’s benchmarking database of other employers, UCSF’s greatest strengths lie in staff commitment to UCSF’s mission and their strong connection to doing quality work.

The opinions about mission and quality of work have historically been areas of strength at UCSF reported in multiple surveys and focus groups across UCSF. An internal communications survey conducted last year confirmed this connection, finding that 94 percent of the 4,500 respondents are familiar with UCSF’s mission, priorities and values.

Both campus and UCSF Health staff showed their biggest improvements in ratings around professional growth and development and recognition – all were institutional areas of focus for UCSF from 2015 to 2017. Over this time period, the Learning and Organizational Development Office has increased its online offerings and participation in them has doubled. Myriad other staff professional development and training opportunities have been expanded in recent years, including those offered by the Office of Diversity and Outreach, University Relations and the Communicators’ Network, to name a few.