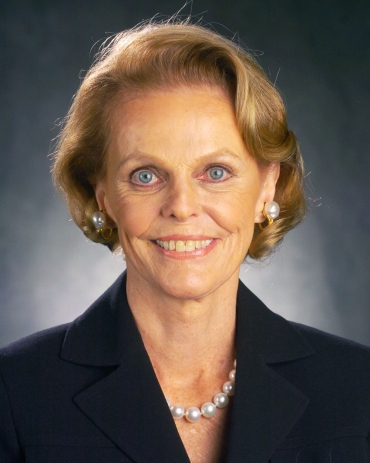 The UC San Francisco community is deeply saddened to learn of the passing of Jeanne Robertson, a Distinguished Director on the UCSF Board of Overseers and passionate advocate for education, psychiatric care, and the arts nationwide.

Born in 1933, Jeanne attended Wellesley College and earned a bachelor’s degree from Northwestern University. She taught at the Latin School of Chicago before moving into educational publishing at McDougal, Littell and Company. She also was the executive director of One-to-One Learning Center in Wilmette, Ill.

A Legacy of Service

This dedication to education became UCSF’s gain when Jeanne joined the UCSF Board of Overseers in 1989. From 1997 to 2000, she served as board chair. During her nearly 30 years of loyal service to UCSF, she witnessed transformative change, including the tenures of six chancellors, the creation of the Mission Bay campus, and the opening of UCSF Medical Center at Mission Bay. Jeanne served on numerous committees, including the Mission Bay Task Force, and she and her husband Sanford “Sandy” Robertson were instrumental in founding and shaping the vision for the Mission Bay Campus. In recognition of her service, UCSF awarded her the UCSF Medal in 2000.

“Jeanne had an uncanny ability to get to know people, figure out what they might be interested in, and then engage them,” says Bill Oberndorf, current chair of the UCSF Board of Overseers. “As a past chair of the UCSF Foundation, Jeanne played a central role in recruiting many of the board’s current members. She also was instrumental in introducing many major donors to UCSF. We will miss her greatly, but will do so knowing how enriched our lives have been by knowing her.”

“Jeanne was one of those quiet yet consistently amazing people,” noted UCSF Chancellor Sam Hawgood, MBBS. “She made tremendous contributions to building our community, both in terms of people and facilities, over many years.”

The Jeanne Robertson Auditorium at Mission Bay was donated by the Robertsons in 1999 and serves as a popular event space, especially for commencement ceremonies. Mark Di Suvero’s “Dreamcatcher” sculpture, which graces Koret Quad on the Mission Bay campus, also was a gift from the Robertsons in 2014; Jeanne fell in love with the 50-foot-tall steel artwork when it was displayed for a year at Crissy Field, so she and Sandy bought it for the University. “The name, Dreamcatcher, aptly describes the spirit of the innovative work of the scientists at Mission Bay,” she said at the time.

The Robertsons also supported the Campaign for UCSF Medical Center in 2010, creating the Jeanne and Sanford Robertson Terrace, where patients and their families can enjoy sunshine and fresh air on the fifth floor.

“Jeanne was truly a shining star for UCSF, and her kindness and generosity were boundless,” recalled Mark Laret, president and CEO of UCSF Health. “She was one of the most positive people I’ve ever met, and we were so lucky to benefit from her energy, passion and commitment for so many years.”

Strong Support for Psychiatry and the Neurosciences

Jeanne had an interest in psychiatry that led her to become an advocate both in the Bay Area and nationally. In 1994, she and Sandy established the Jeanne and Sanford Robertson Chair in Neurobiology and Psychiatry at UCSF. They continued their support of this important field in 2000 by establishing an endowment for the Center for Neurobiology and Psychiatry Research, which brings together psychiatric researchers and neurobiologists to explore the molecular, cellular, and neurobiological factors that contribute to mental illnesses.

“It’s impossible to overstate Jeanne’s contributions to UCSF and the Department of Psychiatry,” said Matthew W. State, MD, PhD, chair of the Department of Psychiatry and the Oberndorf Family Distinguished Professor in Psychiatry, who has also received vital, ongoing support thanks to the Robertsons’ generosity. “Jeanne went out of her way to be open about her family’s struggles with severe mental illness decades before doing so was widely accepted, and she became a crucial resource for countless families suffering similar challenges. She was a visionary who recognized the importance of neuroscience and interdisciplinary research to psychiatry, generously supporting generations of outstanding scientists and clinicians, and encouraging others to do so as well.”

Jeanne also served on the national council for McLean Hospital in Massachusetts, as well as on the advisory councils of the Depression Center at the University of Michigan and the International Mental Health Research Organization. She also was director emeritus of the Brain and Behavior Research Foundation.

The Robertsons also shared an enthusiasm for the arts. Jeanne served as a trustee of the Fine Arts Museums of San Francisco and donated to the California Academy of Sciences, the Asian Art Museum, the San Francisco Symphony, San Francisco Ballet and SFJazz, in addition to many other local nonprofits.

Dedicated to preserving local history, the Robertson home is the oldest residence in San Francisco, where they hosted many memorable charitable events. She also served on the Victors for Michigan fundraising campaign for the University of Michigan, Sandy’s alma mater, which they have also generously supported in both music and athletics.

Jeanne will be remembered for her tireless devotion to psychiatry, education, the arts and her community.