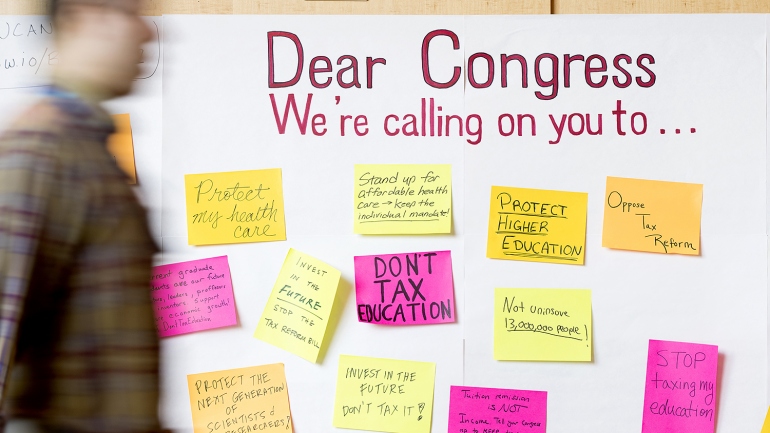 Heading into the new year, political issues in Washington, D.C., and in California have the potential to disrupt scientific funding, limit the flow of new scientists and clinicians through immigration changes, and shake up the health care system.

At UC San Francisco and other academic and health institutions nationwide, the anticipation of new battles comes after a tumultuous year in the fight for investment in scientific research and affordable, equitable health care.

If there’s a lesson for the coming year, it is that we are working with a very different White House than previous administrations. Keith Yamamoto, vice chancellor of science policy and strategy at UCSF, said: “The main thing is to keep our efforts in Washington aligned, sustain the support we’ve garnered, and continue to push for evidence-based decisions and respect for science.”

Though the political landscape can shift quickly in Washington, several issues on the horizon there and in California may impact UCSF’s tripartite mission of education, research and patient care.

There is cautious optimism that National Institutes of Health funding – which provides more than two-thirds of UCSF’s research funding – will continue, especially after bipartisan support from Congress to increase it this year. While a Trump administration proposal to slash NIH funding for facilities and administrative (F&A) costs failed, uncertainty hovers. “We couldn’t have predicted this year that we’d have to do an all-out push on F&A,” Yamamoto said.

The unpredictability of federal agencies makes partnerships with the private sector, like the recently launched ATOM project, and continued funding on the state level, like the California Initiative to Advance Precision Medicine supported by Gov. Edmund G. Brown Jr, more important than ever, Yamamoto said.

As UCSF and others seek support for science in Washington, they are finding fewer sympathetic ears. Many top science posts in the federal government – essential liaisons and drivers for science policies – remain empty.

The President, for example, has yet to appoint a science adviser, who typically serves also as the director of the Office of Science and Technology Policy, the same office that promoted precision medicine and the BRAIN Initiative under the previous Presidential administration.

Republican leadership in the House of Representatives has made entitlement reform, including cuts to Medicaid spending, a priority for the coming year. One possibility is transitioning to a block-grant system, which assigns a fixed amount of money to each state to run its Medicaid program. For larger states like California, a block-grant system would likely not fund sufficient coverage, especially with rising medical costs. Currently, UCSF Health is reimbursed by Medicaid for roughly 60 cents per dollar spent.

Also within health care is the Affordable Care Act, which the Republican-controlled Congress failed to repeal this year, though they have made it clear that they will continue to try to dismantle the system. The individual mandate will likely be repealed by the tax bill, which the Congressional Budget Office estimates will result in 13 million fewer people being covered by health insurance by 2017.

“Those on the front line of providing health care saw millions more patients covered in California with the Affordable Care Act,” said UCSF Health CEO Mark Laret. “There is a misconception that Medicaid is just for poor people, but nearly one-third of Californians are now covered by Medi-Cal, California's version of the program. One of the best investments we can make in our country is in the well-being of everyone through more, not less, coverage.”

Not all of the health care issues in the next year will be about reducing coverage. A state-level single-payer health care system, in which everyone pays into a state agency that then pays doctors and hospitals for medical care, has gained some momentum in California. Supporters say this would guarantee coverage for all residents, cover all necessary medical costs, and eliminate co-pays, premiums, and deductibles.

But no one has figured out how the government would pay for the estimated price tag of $400 billion, which would almost certainly mean a tax increase. Health care is bound to be a top issue in the 2018 gubernatorial race, with a couple of candidates supporting a single-payer system.

Several proposals in Congress could make education less affordable for graduate students. A proposed revision of the Higher Education Act, which currently has no Democratic support, would cap federal graduate student loans at $150,000, likely impacting professional students who take out large loans, and end a loan-forgiveness program for public servants who have made payments on their loans for 10 years.

Also, the tax bill passed by the House includes a provision that would tax waived tuition for graduate students, drastically increasing their tax burden. It is not yet clear whether the provision will be included in the final tax bill as Congress reconciles the House version and Senate version, which does not include the provision.

Support for students pursuing careers in the health professions and life sciences research is making an investment in the discoveries and treatments of the future.

“Support for students pursuing careers in the health professions and life sciences research is making an investment in the discoveries and treatments of the future,” said Daniel Lowenstein, MD, executive vice chancellor and provost. “We should be looking for ways to make all education more affordable for students from every background.”

For hundreds of health care students nationwide, including at UCSF, their dreams of becoming a practitioner may hang on Congress’ action around the Deferred Action for Childhood Arrivals (DACA) program. The President eliminated the program, and gave Congress until March 28 to find a solution.

If the DACA program is not reconciled as part of the year-end budget, lawmakers will face the issue next year near the same time when the U.S. Supreme Court could be taking up another immigration issue: The administration’s travel ban. The Supreme Court recently ruled that the administration can fully enforce the ban while legal challenges move through appeals courts. These challenges will likely reach the Supreme Court before the end of the court’s term in June 2018.

The UC system has joined numerous scientific and educational organizations in objecting to the ban and its negative impact on the free flow of ideas and people that drive scientific progress. UC President Janet Napolitano, an outspoken critic of the administration’s rescission of the program she created, has sued the government in federal court. 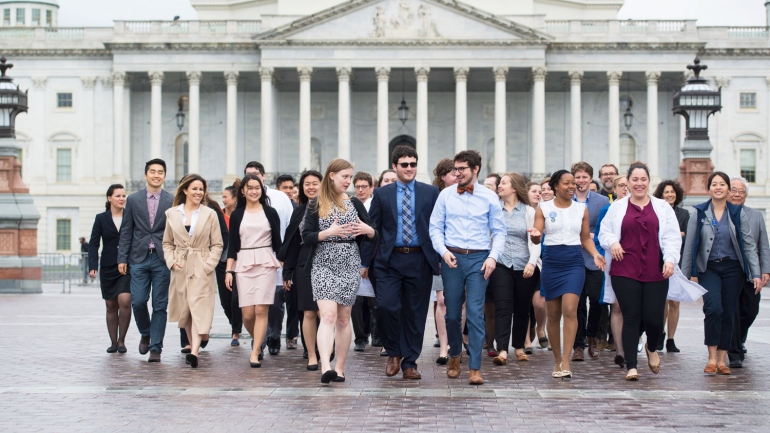 As all of these issues loom next year, there is also the potential for new voices in Washington and California.

Looking ahead to the midterm elections, the entire House of Representatives, a third of the Senate, 36 governors – including California’s – and hundreds of state legislative seats will be at stake.

Conventional wisdom, Yamamoto said, is that legislators are more cautious and forgo sweeping new initiatives in election years. However, the elections hold the opportunity to bring new players into the issues facing academic and health institutions, and, potentially, the willingness of lawmakers to take on partisan issues in the future.

Regardless of the political tides, one thing is certain for those interested in advocacy, said Yamamoto, “Each election brings a new set of representatives, so we need to keep educating.”