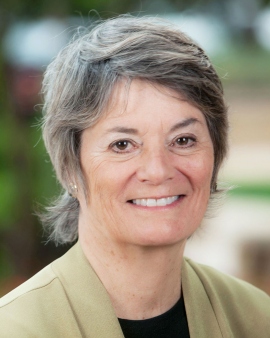 A national leader in nursing who served as dean at two top U.S. universities and is a former member of the UCSF faculty, Catherine L. Gilliss, PhD, RN, FAAN, has been appointed dean of the UCSF School of Nursing, one of the preeminent graduate nursing schools in the nation.

Gilliss, who also will serve as associate vice chancellor for nursing affairs, joins UCSF from Duke University, where she was dean of the School of Nursing (2004-2014), becoming the first Duke alumna to hold that position. After 10 years as dean and vice chancellor for nursing affairs, she stepped down in August 2014 and was on leave for the 2014-15 academic year to be a fellow in the Stanford University Distinguished Careers Institute.

“We are delighted that Catherine Gilliss is joining UCSF as the dean of the School of Nursing,” said UCSF Chancellor Sam Hawgood, MBBS. “She brings outstanding experience and expertise as a dean of two of the nation’s top-ranked nursing schools to this position. Having previously served on the school’s faculty, she is intimately familiar with its mission of educating health leaders, conducting innovative research, promoting health equality and equity, and advancing nursing. She will be an invaluable asset as both the university and the school continue to develop and grow.”

Gilliss assumes her new position on Sept. 25. She will join Hawgood’s Chancellor’s Cabinet, which consists of the deans of the other professional schools – dentistry, medicine and pharmacy – and the Graduate Division, the CEO of UCSF Health, the vice chancellors and other leaders of the University.

“I am very honored to have been selected as dean for the UCSF School of Nursing,” Gilliss said. “The school has played an important role in my professional life, and I hope to return some value to it for its earlier investment in me. I have maintained close working relationships with colleagues at UCSF and have always thought of San Francisco as my home. This is a dream come true for me.”

Gilliss succeeds David Vlahov, PhD, RN, who led the nursing school beginning in April 2011. Under his leadership, the school launched innovative education programs, excelled in its rankings as a top graduate school and advanced its research activity. Vlahov stepped down in August 2016 and remained on the UCSF nursing faculty to focus on his research and mentoring before being named associate dean of research at Yale School of Nursing.

Sandra Weiss, RN, PhD, FAAN, professor and Robert C. and Delphine Wentland Eschbach Chair in Mental Health, co-director of the UCSF Depression Center and professor in the school’s Department of Community Health Systems, served as interim dean and will remain on the school faculty.

“We are very grateful to Sandra for guiding the School of Nursing for the last year, keeping it focused on its mission,” Hawgood said.

The University conducted an extensive national recruitment before selecting Gilliss, who reports to Hawgood. She also will hold an underlying tenured faculty appointment as professor of family health care nursing while serving as dean.

Committed to Development of People and Programs

At Duke University, Gilliss oversaw the approval and initiation of the PhD degree program in nursing and Doctor of Nursing Practice degree program, construction of a new building (with additional expansion), and development of the School of Nursing's strategic plan. The school has placed in the Top 10 in both U.S. News & World Report rankings and among nursing schools doing research funded by the National Institutes of Health.

A former president of the National Organization of Nurse Practitioner Faculties and the American Academy of Nursing and regent at the University of Portland, she currently serves as a director of CHIMERIX, a publically traded biotech company dedicated to preventing and treating life-threatening viral infections, and a board member of Triangle Residential Options for Substance Abusers.

With backgrounds in psychiatric and primary care, Gilliss’ research has examined the impact of behavior on the recognition and management of illness. Her work currently focuses on the family as a complex system and its response to and role in shaping the course of chronic illness. For her research efforts, she received the 2007 Distinguished Contribution to Family Nursing Research Award.

Gilliss also has focused on translational and implementation science and innovative models of health care delivery. She served as director of the Duke Translational Nursing Institute, a venture with the Duke University Health System Nursing Service, from 2009-2013.

“I am most proud of having co-led or facilitated the development of a number of educational pipeline programs at Yale and at Duke that opened up educational opportunities to students who never considered higher education in nursing or graduate education,” Gilliss said. “These programs are but one example of my commitment to the development of others, which has been the focus of my work as an educator.”

Gilliss is a fellow in the American Academy of Nursing, a member of the North Carolina Institute of Medicine and Sigma Theta Tau International, and has been honored as distinguished alumna by UCSF and Duke.

In her new role, Gilliss’ responsibilities include advancing the UCSF School of Nursing’s commitment to combining research and scholarship with high quality clinical education at the graduate level, developing new ways to sustain the school’s growth, leading the school in its strong commitment to diversity, and serving as a key thought leader in the national and international nursing community.

“As one of the world’s premier schools of nursing, the UCSF School of Nursing has played a key role in the preparation of nurse leaders across the globe,” Gilliss said. “The opportunity to return to such a distinguished school and to my hometown brings my professional and personal worlds together.”

As an organizationally minded leader, Gilliss is focused on creating an environment where employees can do their best work while advancing the work of the larger organization as a whole. She is committed to sustaining the school’s excellence in its education and research programs, as well as developing internal and external relationships to conduct and further expand its work.

Her foremost priorities for the UCSF School of Nursing are development of a sustainable business model and more integration of its people and programs within the overall UCSF Health enterprise.

“I am curious to learn about all that has changed at UCSF in the last 20 years,” Gilliss said. “Some things, though, are remarkably consistent: a commitment to excellence, a passion for public service, a deep commitment to the university’s public mandate and a resolve to continuously improve. The UCSF School of Nursing remains one of the finest institutions in the world and a respected leader in preparing nurses for the future.”

Hawgood said Gilliss is a natural fit for both the school and UCSF.

“Catherine brings tremendous energy and enthusiasm to the position, and we look forward to her contributions and service as dean,” Hawgood said.

Gilliss will earn an annual total salary of $425,000 and is eligible for standard pension and health and welfare benefits.

Currently, Gilliss resides in Seattle and is married to Thomas P. Gilliss, a practicing attorney and member of the State Bar of California. They have two adult children, Edie and Brian, and five grandchildren. Brian and his wife are graduates of the UCSF School of Medicine and completed their residency and fellowship training at UCSF.