After enduring a half-decade of drought, the Mount Sutro Open Space Reserve should be catching a break. But the high winds and heavy rainfall of this winter’s storm season – California’s wettest in nearly 25 years – had devastating effects on its groves of towering trees.

The 342 trees that were lost throughout the 61-acre Reserve this winter – and the thousands more stand dead or dying – underlie the need for a vegetation management plan to improve the health and biodiversity of the Reserve.

The Impact From the Drought

UCSF saw a “severe decline” in Mount Sutro’s health during the extended drought, which “led to an uptick in the number of dead and dying trees,” said Julie Sutton, UCSF’s Campus Arborist and Facilities Program Manager for Mount Sutro. “Despite the recent rainfall, thousands of these trees are already dead or will not recover.” 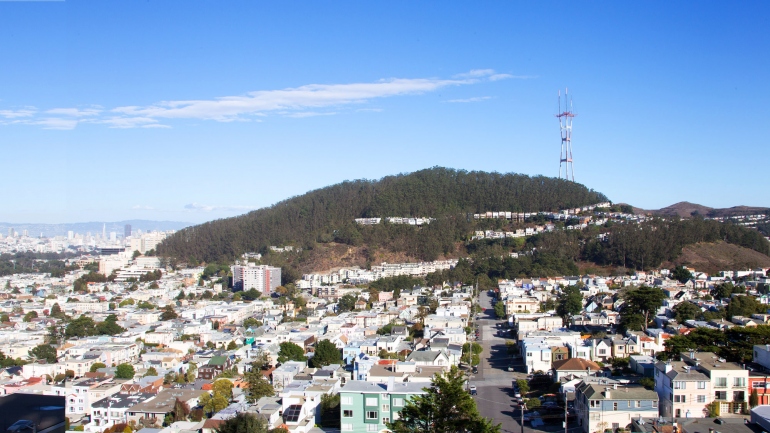 UCSF has released its Draft Environmental Impact Report for the Mount Sutro Open Space Reserve Vegetation Management Plan. Follow us on Facebook for updates about Mount Sutro and the comment period for the DEIR.

Mount Sutro is just one landscape that the drought affected. Statewide, more than 102 million trees perished because of the extreme drought and overstocking, leading to a largescale infestation by insects, which harm trees directly and increase the risk of wildfire. In 2016 alone, California lost 62 million trees to the drought, the U.S. Forest Service reported.

Many of Mount Sutro’s trees are reaching an accelerated end to their lifespan. The historic forest dates back to 1886, when former San Francisco Mayor Adolph Sutro began cultivating the hill on which it stands. The extended drought, disease and multiple pest infestations have exacerbated the decline in health among eucalyptus, Monterey pine and Monterey cypress within the Reserve, creating a widespread loss of trees over the past several years.

UCSF’s arborists catalogued 342 fallen trees in the Mount Sutro Open Space Reserve – creating dangerous hiking conditions and forcing repeated closure of hiking trails – between December 2016 and March 2017 alone. An independent survey found that of the approximately 14,000 trees in the Reserve, about 3,500 are dead or dying.

Some of the large eucalyptus trees damaged by storms were living trees, but the majority of the trees that fell during storms were standing dead, an arborist report stated. While most fell from heavy winds, about 10 percent were damaged by other trees falling on them.

“We need to take immediate steps to remove the trees posing the greatest safety risk and begin replanting efforts to improve the health and biodiversity of the Reserve,” Sutton said.

UCSF began developing the Mount Sutro Open Space Reserve Vegetation Management Plan in 2015, creating a Technical Advisory Committee of forestry and habitat experts and engaging San Francisco residents and community leaders to form a longterm strategy to improve the health and safety of the Reserve. Its key objectives are to increase biodiversity, improve regeneration of trees and other vegetation, and mitigate growing safety concerns by removing dead and dying trees.

“UCSF remains committed to a fully public process as we move through the steps to finalize the vegetation management plan,” said Christine Gasparac, UCSF’s Director of Community Relations.

Public comments on UCSF’s Draft Environmental Impact Report can be submitted during a 46-day comment period that began on July 24, 2017, and closes Sept. 22, 2017. A DEIR public hearing will take place on Aug. 24 at 6:30 p.m. at Millberry Union located on UCSF’s Parnassus campus.

Gasparac encourages UCSF’s neighbors to review the DEIR and give feedback during the comment period, and attend the public hearing in August.

“Together,” she said, “we can make Mount Sutro a safe and beautiful forest that will thrive for years to come.”