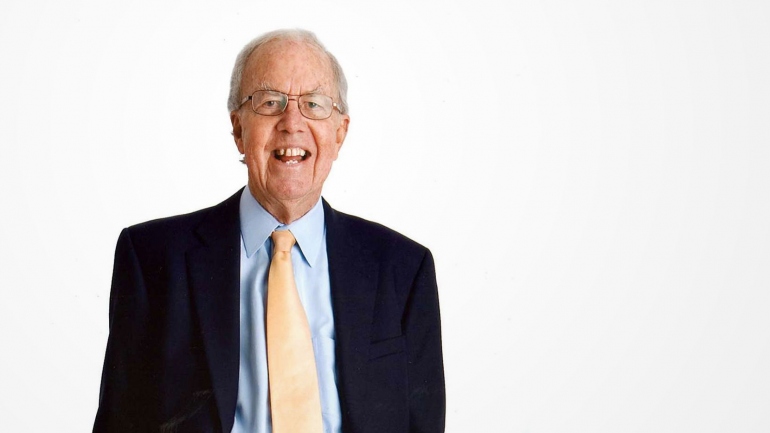 Born in San Francisco in 1926, Bowes graduated from Lowell High School in 1942, served in the U.S. Army during and after World War II, and then earned a BA in economics from Stanford University and an MBA from Harvard University. He went on to become the founding shareholder of Amgen and its first chairman and treasurer, and later co-founded U.S. Venture Partners, which has invested billions of dollars in hundreds of companies that in turn have created more than 100,000 jobs.

Bowes’ most recent gift, emblematic of his long and deep history of philanthropy, was announced earlier this month. With a $50 million pledge, Bowes invested in UCSF’s core strength and innovative engine: young investigators. This pledge, funding the Bowes Biomedical Investigator Program, is Bowes’ largest gift ever to UCSF, bringing his total giving to $100 million.

[Bill's] warmth and generosity were immediately evident, as was his passion for helping young people launch their careers. ... His impact on UCSF has been profound.

“I first met Bill when I was named dean of the UCSF School of Medicine,” recalled Chancellor Sam Hawgood, MBBS, when the pledge was announced. “His warmth and generosity were immediately evident, as was his passion for helping young people launch their careers. He has accomplished that with this gift and so many others through the years. His impact on UCSF has been profound.”

Above all, Bowes valued the power of education and appreciated the importance of basic science in medical discovery, as evidenced by the couple's support of the Discovery Fellows program, which was established to encourage and support basic science PhD students at UCSF.

At UCSF, in addition to financial contributions – some made through his foundation, the William K. Bowes, Jr. Foundation – Bowes is best remembered for chairing the Mission Bay Task Force and serving on the UCSF Board of Overseers as well as the cabinet of the Campaign for UCSF. To honor his contributions, in 2005 Phyllis and William Draper established the William K. Bowes Jr. Endowed Chair in Neuroscience Research at UCSF. In 2009, Bowes was awarded the UCSF Medal for his outstanding personal contributions to the University, which included the Broad Center for Regeneration Medicine, the Osher Center for Integrative Medicine, the John G. Bowes Distinguished Professorship in Stem Cell and Tissue Biology, the John G. Bowes Research Fund for Stem Cell and Tissue Biology, the Bowes Angiogenesis Fund - Dr. Doug Hanahan, and Mission Bay.

Bowes also enthusiastically supported QB3, a multi-UC campus initiative in quantitative biosciences designed to drive the state’s economy and improve the quality of life for its residents by stimulating innovation and helping inventors commercialize new technologies in the health and environmental sciences.

One of Bowes’ remarkable contributions, recalls Hawgood, was his ability to galvanize support among friends and colleagues. “Bill was so widely respected and beloved in the Bay Area community,” Hawgood said, “that when he said something was worth investing in, others trusted his instincts and followed his lead.”

Philantropic Work in Arts, Other Organizations

In addition to his volunteer work on behalf of UCSF, Bowes also served on boards and committees for the San Francisco Conservatory of Music, The Exploratorium, Grace Cathedral, the Institute for Systems Biology, the Asian Art Museum, the Environmental Defense Fund and the Hoover Institution. In 2007, his contributions to the region were recognized by being named San Francisco Bay Area’s Outstanding Philanthropist by the Association of Fundraising Professionals Golden Gate Chapter and Northern California Grantmakers.

Bowes will be remembered for his modesty and warmth; he remained actively engaged in the causes he supported but shirked publicity, valuing instead the relationships he forged with faculty, students and the many others whose lives he touched.

“At every point, when the need was urgent, and the opportunity transformative,” said Stephen Hauser, MD, chair of Neurology at UCSF, “Bill was there for us.”