The San Francisco-based Chan Zuckerberg Biohub, an independent collaboration among three of the nation’s leading research universities, is the first philanthropic science investment made by the Chan Zuckerberg Initiative, which is dedicated to advancing human potential and promoting equality.

Headquartered next to UCSF’s Mission Bay campus, with a satellite site at Stanford, the Biohub is designed to create synergy among the three research universities, and to provide basic researchers and clinical scientists with flexible laboratory space, the latest technological tools and funding for ambitious research projects.

“The Biohub will be the sinew that ties together these three institutions in the Bay Area like never before,” said Stephen Quake, PhD, Stanford professor of bioengineering and of applied physics, who will co-lead The Biohub with Joseph DeRisi, PhD, professor and chair of biochemistry and biophysics at UCSF.

“This is an extraordinary opportunity,” said DeRisi. “We have three great research powerhouses in the San Francisco Bay Area in UCSF, Stanford and Berkeley, and this nexus will forge highly productive partnerships to advance human health.”

DeRisi is renowned for his use of genomic technologies for the study of malaria and viruses, and the diagnosis of unknown infections; Quake has invented many widely used biological measurement technologies, including microfluidic devices that are the biological equivalent of the integrated circuit, and the first non-invasive prenatal test to replace amniocentesis.

In addition to the Biohub, the Chan Zuckerberg Initiative also announced plans for a broader focus on science, its second major initiative, alongside work to improve education for all students. The Chan Zuckerberg Initiative’s goal is to cure, prevent or manage all diseases by the end of the century by accelerating basic science research. The Initiative seeks to support new ways of enabling scientists and engineers to work together to build new tools that will empower the whole scientific community and advance progress.

In 2015, Chan and Zuckerberg pledged in an open letter to their newborn daughter to donate 99 percent of their Facebook shares during their lives for charitable purposes. “Partnering with experts,” they wrote, “is more effective for the mission than trying to lead efforts ourselves.” 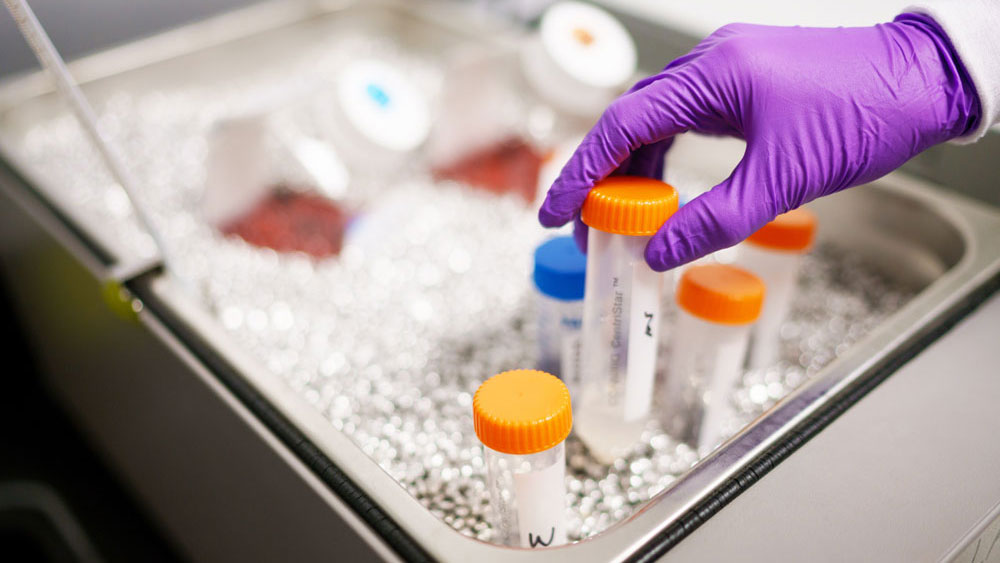 How the Biohub Will Create Opportunities for Research Collaboration

Joe DeRisi, co- of the new Chan Zuckerberg Biohub at Mission Bay, speaks about his vision for the Biohub and what researchers can look forward to.

“We are excited to see such a generous and timely investment in fundamental scientific work across the Bay Area,” said Jennifer Doudna, PhD, UC Berkeley professor of molecular and cell biology and chemistry, Li Ka Shing Chancellor’s Chair in Biomedical and Health Sciences, Howard Hughes Medical Institute investigator, adjunct professor of cellular and molecular pharmacology at UCSF, and a member of the Biohub’s Science Advisory Group.

Doudna is best known for her work on CRISPR-Cas9, a gene editing technology that has the potential to revolutionize genetics, molecular biology and medicine.

The Biohub will immediately initiate two potentially transformative research projects to be conducted over the next five years: the Cell Atlas and the Infectious Disease Initiative.

The Cell Atlas will be a map made available to researchers around the world that reveals the many different types of cells that control the body’s major organs, such as the brain, heart and lungs. The Cell Atlas will also depict the internal machinery of cells in unprecedented detail, allowing scientists to search for the basic breakdowns that occur within cells when disease strikes. This is a large endeavor and it is expected that the Biohub’s efforts will spur global collaborations to complete the Cell Atlas.

The Infectious Disease Initiative will explore new ways to create drugs, diagnostic tests and vaccines against the many infectious diseases that still threaten much of the world, such as HIV, Ebola and Zika. This Initiative will include a Rapid Response Team that can immediately devote world-class scientists and advanced research technology to develop new ways to fight a sudden outbreak.

The Biohub’s open-access model will allow researchers at its three member universities and elsewhere to use its technology and collaborate with Biohub scientists. The Biohub will provide support for both established and early-career scientists.

The Biohub will fund Chan Zuckerberg investigators to support high-impact projects that may be too exploratory to receive government support. The competition for these slots will be open to faculty at the three universities in October, and DeRisi and Quake expect investigators to be selected by an independent panel of scientists by the end of the year. The Chan Zuckerberg Initiative will not be involved in reviewing and selecting investigators.

“The Biohub builds upon our region’s unparalleled strength in technological and biomedical innovation, and cements the Bay Area’s position as the premier environment for collaborative scientific partnerships that will create revolutionary health advances benefiting all of humankind. The incredible vision of Priscilla Chan and Mark Zuckerberg will resonate with the international scientific community and re-energize scientists around the world at a pivotal moment in our understanding of human biology, health and disease,” said UCSF Chancellor Sam Hawgood, MBBS.

The Biohub ... cements the Bay Area’s position as the premier environment for collaborative scientific partnerships that will create revolutionary health advances benefiting all of humankind.

“This initiative will dramatically improve our ability to conduct fundamental research at the intersection of biology and engineering that can lead to important applications for human health,” said Stanford President Marc Tessier-Lavigne, PhD. “We are grateful for the investment by Mark and Priscilla in both sophisticated tools and an unprecedented Bay Area-wide university collaboration that will enable groundbreaking discovery.”

Former Stanford President John Hennessy, PhD, was instrumental in helping establish the Initiative, working closely with the Chan Zuckerberg Initiative on its inception. He will serve on the board of the Biohub in his personal capacity as a scientist and technologist.

“The vision for the Chan Zuckerberg Initiative’s science focus and the Biohub capitalizes on the strengths of our Bay Area universities, and also makes a major investment in early-stage research of the type that cannot be readily funded elsewhere,” Hennessy said. “It is large-scale collaboration at its best, and with tremendous promise for solving the world’s greatest health challenges.”

“In bringing together three world-class research organizations in UC Berkeley, UCSF and Stanford, the Biohub represents the kind of cross-institutional collaborative environment that will be necessary for addressing the most pressing life sciences challenges of our time,” said UC Berkeley Chancellor Nicholas Dirks, PhD. “Each of these institutions brings its own set of perspectives, questions, ideas and expertise to this venture, and, given this unprecedented kind of exchange, I have no doubt that the Biohub will be the catalyst for major research breakthroughs.”

“This exciting new venture by the Chan Zuckerberg Initiative brings together private philanthropy with some of the best minds in the world,” said Janet Napolitano, JD, president of the University of California. “Collaboration in the name of science and the public good among the Bay Area’s three leading research universities will surely speed the development of new treatments and cures for diseases once deemed intractable.”