As a kid, he played among the lush thicket and trees, running and climbing the hill rising 900 feet over the heart of San Francisco. “But I didn’t realize the extent of the forest. I don’t think I ever ventured all the way down to the University side of the forest,” he said.

Back then, there were few accessible routes through Mount Sutro, owned by UC San Francisco with just a handful of staff focused on keeping the 61-acre Reserve healthy and free of fire danger.

Dawson and other neighbors eventually saw an opportunity to help make Mount Sutro a place for the community to enjoy. Together they formed the nonprofit Sutro Stewards in 2006 and began building a trail network through the Reserve.

Today, after 10 years and a number of local awards, the Sutro Stewards’ mission is as clear as ever: to enhance the natural environment of the Reserve and to improve public access, said Dawson, now the executive director of the group.

“The largest accomplishment of the Stewards has been activating the Reserve for the public,” said Dawson. “Sometimes I see three generations of a family, from grandparents to grandkids, hiking the trails together. It’s incredibly rewarding to know we’ve created a destination.”

The Start of the Stewards

Few people ventured into the Reserve before the Stewards got involved in 2006.

In 2004, the Rotary Club of San Francisco restored the former Nike missile site at the summit into a wildflower meadow, and a small group of volunteers, including Dawson, went looking for trails that could lead to the meadow. One day, they stumbled across an old trail dating from the 1880s, overgrown with blackberry. The Stewards’ first official project was restoring this Historic Trail.

“You pretty much needed a machete to get through things back then,” said Julie Sutton, the Facilities Program Manager at UCSF. “The difference in appearance of the Reserve between then and now is astonishing.” 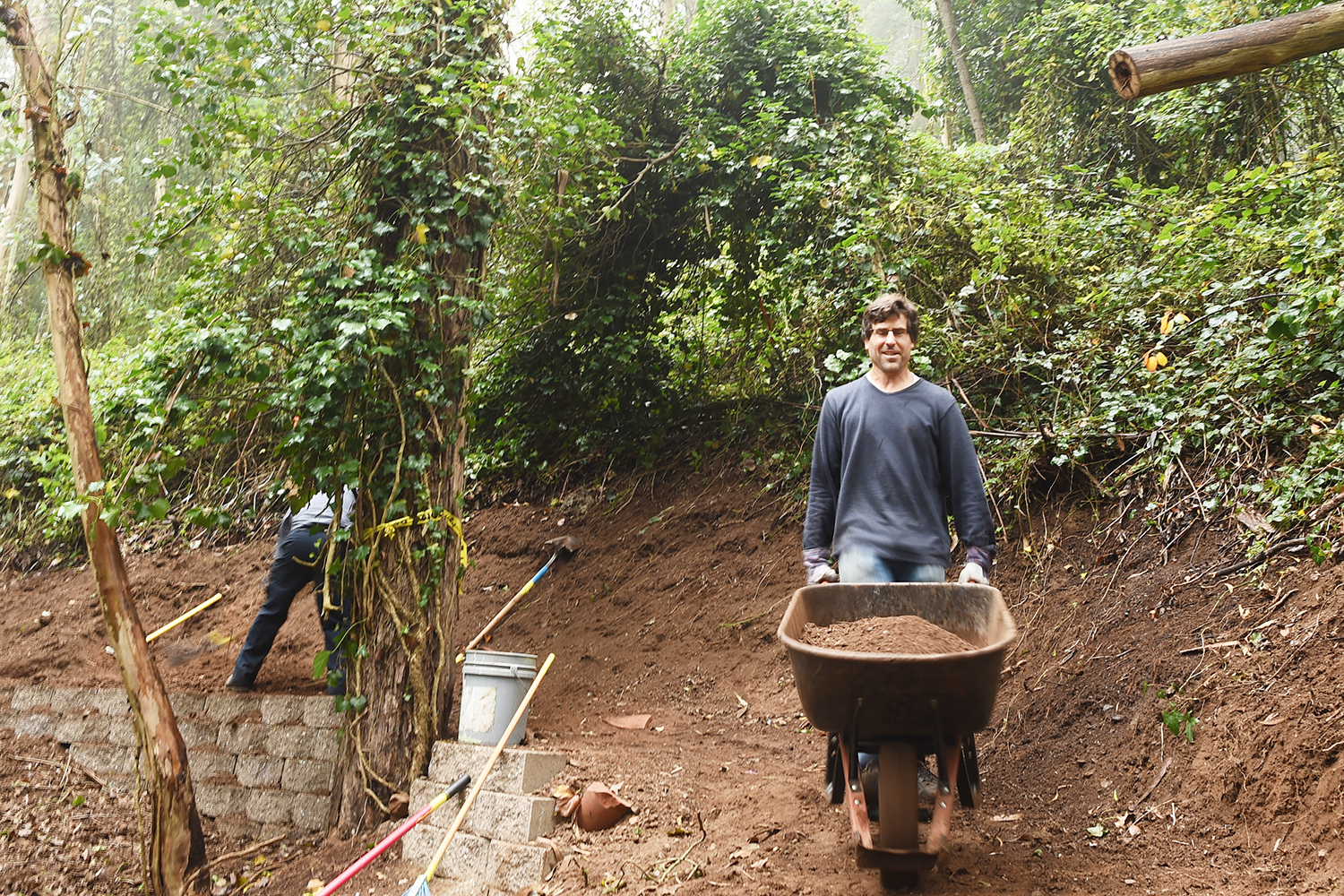 Vandalism – littering, graffiti and illegal camping – had been a major problem in the Reserve before the Steward’s regular presence, said Sutton. “When the space didn’t look good, people didn’t care about it. Now when we have trails that are free and clear, and nice signage, everyone takes better care of it.”

Now there is a wealth of people ready to help. Last year, the Stewards welcomed 1,400 volunteers, who together donated 5,100 hours of labor. Between 10 and 40 people show up for each volunteer day: habitat and trail work every first and third Saturday of the month and nursery work every Wednesday. “It’s never been hard to draw people to volunteer,” said Dawson.

Their work also hasn’t gone unnoticed: The Stewards have won a number of local awards over the years, including a 2007 San Francisco Beautiful Award for its work on the native plant garden and trail network and 2009 “Best of the Bay” recognition by San Francisco Magazine.

On a recent Saturday morning, volunteers on the recent Saturday set out under the summer fog, wearing gardening gloves and wielding handpicks. They uprooted thick tangles of English ivy and blackberry and tugged at tufts of ehrharta, a grass grown for cattle pastures, that seemed to sprout from every crag and crevice.

“Something smells sweet and minty over here,” said Rob Bakewell, a hospice massage therapist who has been volunteering with the group since its founding in 2006. He parted a vigorous mass of blackberry and the group peered at a sprig of delicate ovate leaves. “Oh, that’s yerba buena,” said Amy Kaeser, the conservation manager, one of three paid staff of the Stewards.

Part of the work the Stewards undertake is removing invasive non-native vegetation. The problem with invasive species, such as blackberry and ivy, is not so much their place of origin as their ability to outcompete and overwhelm other species, especially native species such as yerba buena. The unchecked growth of invasive species' leads to poor biodiversity and a less welcoming habitat for local wildlife.

By noon, the group had uncovered more native plant species: Douglas iris, fringe cup and pink currant. “If it’s growing on Mount Sutro, I should be able to ID it,” said Kaeser. Earlier in the day she had passed around samples of blackberry and bee plant so the volunteers could learn to distinguish them – pull the blackberry, leave the bee plant. A diligent first-time volunteer snapped a photo on her phone for later reference.

In the thick summer fog, the 120-year-old eucalyptus forest was enchanting, like masts of sunken ships. UCSF has managed the Reserve since 1953 when it took ownership. In the late 1800s, the land was owned by Adolph Sutro, a Prussian immigrant, businessman and mayor of San Francisco from 1894 to 1896. He planted Mount Sutro with eucalyptus in a failed lumber venture.

Overcrowding and drought, though, have taken a toll on the Reserve in the last decade. Some of the trees now are bare except for the ivy climbing on them – a sign they aren't healthy. A thriving eucalyptus should have a canopy like a head of broccoli, Bakewell said.

UCSF recently drafted a new management plan aimed at restoring the health of the Reserve, promoting biodiversity and maintaining public access to the trails.

“It’s beautiful,” said Kaeser of the Reserve. “But there’s a lot of work to be done.”

A large portion of that work now and for the past 10 years has been conducted by the Stewards, who have created a network of well-marked, multiuse trails that attract hikers, runners, cyclists and dog-walkers.

Even so, unlike the landmark green spaces of the city, Golden Gate Park or Twin Peaks, the Reserve still feels like a well-kept secret. Every volunteer seems to remember discovering the space for themselves.

Rezz, a volunteer for eight years, first noticed the Reserve from a window in UCSF Medical Center at Parnassus. He was visiting his mother in a hospital room overlooking the Reserve. “It struck me as an impossibly large area that I’d never been to in San Francisco,” he said. A self-described “former world traveler,” he said laying down new trail in the Reserve is how he’s traveling these days.

For many years, Edith Bourbin walked past the Reserve to and from her job as a cytotechnologist at UCSF, but never had time to explore. Retired now, she’s among the regulars, along with her husband of 39 years, Paul Bourbin, an orchid specialist. She especially likes working in the native plant nursery and learning the plants’ Latin names.

Volunteers young and old, from neighboring communities and across the Bay Area, find their way to the Stewards. In another part of the Reserve that Saturday, volunteers were building the new Clarendon Trail that will connect the Reserve to the nearly 400-mile long Bay Area Ridge Trail.

Alice Hasselbacher and her 14-year-old son, Alex, had taken the train from Redwood City that morning, and they were working side by side, clearing a section of the trail with McLeod rakes, a sort of combination hoe and rake widely used in fighting wildfires.

They stepped aside to let Mark Sullivan push a wheelbarrow of dirt past them. He’d always liked playing in the dirt as a kid and discovered the Stewards from cyclocrossing (biking plus obstacles) on the trails. “I enjoy the work, and I enjoy the people,” he said simply.

Mike Grade, who works for the San Francisco Girls Chorus, ran on the trails for years before it dawned on him that someone must be maintaining them. Now he runs on trails he helped build. “It feels like home up here,” he says. “I feel like my sweat is in the earth.”

Learn more about the Sutro Stewards work, including volunteer opportunities, at the group's website »