Consistently proud to be a top fundraising team in AIDS Walk San Francisco, UC San Francisco aims to step up its game during this milestone year – the 30th anniversary of the event – to raise funds for programs and services. 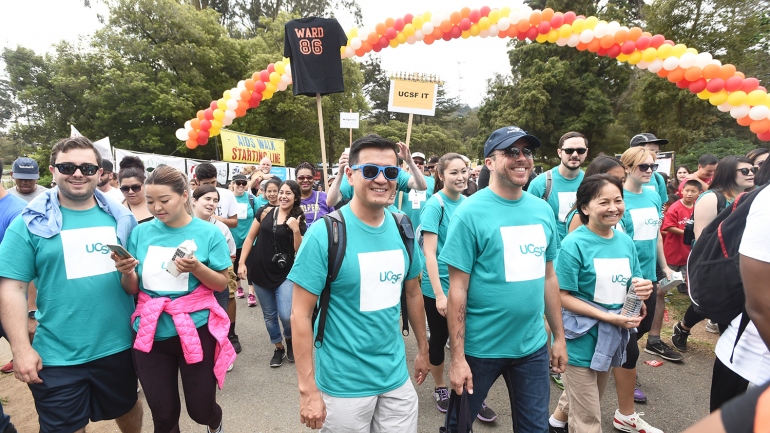 You can support AIDS Walk San Francisco by joining one of the many UCSF teams or by donating to a team.

The UCSF AIDS Walk Steering Committee opted to raise the bar to generate $200,000 in donations, $60,000 more than its first-place standing in 2015. AIDS Walk San Francisco is slated for Sun., July 17.

“Every year, we rally our community behind a cause that is near and dear to our hearts,” said Jennifer Mannix, who co-leads the Steering Committee along with Lisa Cisneros of University Relations, and Georgina Lopez of Global Health Sciences. “UCSF is known worldwide for its leadership in AIDS research and care, and we also want to show our commitment to our local community in honor of all who lost their lives or loved ones to this disease.”

This year, the committee is hoping that with strong support from teams from across the campus and UCSF Health, the clinical enterprise formerly called UCSF Medical Center, UCSF will break recent records to benefit programs and services for treatment, prevention and education about HIV/AIDS.

UCSF walkers who contribute at least $25 will receive a free light breakfast, lunch and a T-shirt.

This year, $100,000 in proceeds raised from the walk will help launch the “Golden Compass Program,” a new service for HIV-positive people who are now middle aged and considered “living well” with HIV. HIV-positive patients who are 50 and older may be at higher risk for heart disease, eye problems, bone disease, chronic pain and frailty, according to Monica Gandhi, MD, medical director of Ward 86 at Zuckerberg San Francisco General Hospital (ZSFG).

Join a conversation with Monica Gandhi, co-director of Ward 86, and two principals of the documentary “Last Men Standing.”

Learn about the event

The Golden Compass Program will focus on providing multidisciplinary medical care, including heart health, mental health, bone health, strength and fitness; dental, hearing and vision services; and social support and navigation for patients with HIV over 50.

“With the support of AIDS Walk San Francisco, we are aiming to launch the Golden Compass Program at Ward 86 by Jan. 1, 2017,” says Gandhi, who will direct the overall initiative with Meredith Greene, MD, a physician trained in HIV and Geriatrics. Greene will serve as its associate medical director. Diane Havlir, Chief of the Division of HIV, Infectious Diseases, and Global Medicine at ZSFG, will be leading the initiative.

In 1981, UCSF’s Paul Volberding, MD, was a young physician who helped establish Ward 86, one of the first units exclusively devoted to caring for HIV-infected patients at the city’s public health hospital, now ZSFG. UCSF’s faculty physicians practice and train health professionals at ZSFG, a partner in public health since 1873. At Ward 86, Volberding and others courageously collaborated with community-based organizations to develop what became a national model of compassionate care where research discoveries drove novel treatments that helped turn the tide on what was then inevitably a death sentence.

For his lifetime contributions to fighting HIV/AIDS, Volberding will be recognized as the honorary chair of AIDS Walk San Francisco.