About 150 of the nation’s foremost thought leaders in academia, child and public health, policy, technology and data science gathered at UC San Francisco to kick-start the conversation about what can be accomplished in precision public health. 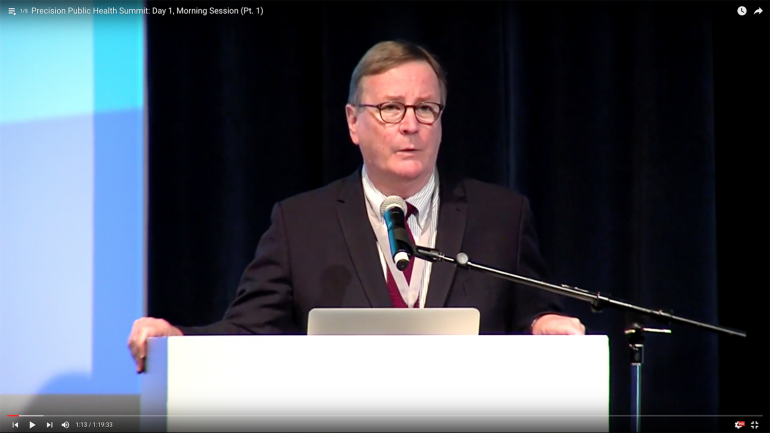 The keynote speeches and panel discussions are available on video.

Following the summit, organizers issued a final report, capturing the themes as well as next steps.

The White House Office of Science and Technology Policy and the Bill & Melinda Gates Foundation convened the summit, titled “Precision Public Health: The First 1,000 Days,” at UCSF on June 6-7.

“We are embarking on a journey together to explore what is possible in precision public health,” said summit organizer Kirsten Bibbins-Domingo, PhD, MD, Lee Goldman, MD, Endowed Chair in Medicine and director of the Center for Vulnerable Populations at Zuckerberg San Francisco General.

The summit focused on the first 1,000 days of a child’s life, a time during which critically important development occurs.

“We hope that these experiences will inspire you to the possibilities of how we can partner to ensure that all children, no matter what their circumstance, have the best opportunity to survive and thrive,” said UCSF Chancellor Sam Hawgood, MBBS, in his opening remarks for the summit.

Sue Desmond-Hellmann, MD, MPH, chief executive officer of the Gates Foundation who served as UCSF’s chancellor from 2009 to 2014, said she wanted to make sure the convening of experts occurred for two reasons. One reason was the threat that precision medicine will increase inequities in health. But more important than the threat is the opportunity, she said, to improve the lives of children around the world.

Desmond-Hellmann pointed out the statistic that nearly 6 million children under the age of 5 died in 2015. “And most of these children died simply because they happen to be born into poverty – into a community where infectious diseases are prevalent, health care is limited and nutrition is often poor,” she said.

Over the course of two days, summit participants heard from speakers on a range of topics involving precision medicine, public health, infant and child health, and data science. The summit also included a day of workshops in which participants selected topics and worked toward actionable steps that will be carried forward by working groups.

The idea of the summit, said Claudia Williams, senior adviser in the White House Office of Science and Technology Policy, was to move from ideas to action in two days.

“We are here to harness the power of big data and emerging technologies to improve the lives of moms and kids,” she said. “And I am so excited to work with you to apply what we’ve learned in the Precision Medicine Initiative to this tremendous opportunity.”

Precision medicine aims to collect, connect, and apply vast amounts of scientific research data and information about our health to understand why individuals respond differently to treatments and therapies, and help guide more precise and predictive medicine worldwide.

The aim of the summit was to look at ways that vast amounts of data can be used to benefit the health and well-being of larger populations, as well as to decrease health disparities.

The speakers at the summit highlighted some of the population health issues precision public health could be used to overcome, including preterm birth, neonatal morbidity, early childhood adversity, and environmental exposures that influence children’s health.

For instance, negative health outcomes in children can often be connected to the neighborhoods where those children live, said Robert Kahn, MD, MPH, associate chair of community health at Cincinnati Children’s Hospital Medical Center. When Kahn traced Cincinnati’s asthma admissions, he found that most of them occurred in low-income areas with high poverty rates, poor housing and high levels of pollution.

Data showed that these areas also experienced other adverse health outcomes such as high incidence of preterm births and rates of injury, suggesting “shared root causes” – including lack of transportation and mental health issues – between the problems, Kahn said.

Closer to UCSF, the Preterm Birth Initiative is taking a comprehensive look at preterm birth in San Francisco, Oakland and Fresno County. The data collected will inform efforts aimed at preventing and treating preterm birth to improve outcomes in the nearly one in 10 mothers who will deliver preterm and babies who are born preterm.

Also at the summit was Lee Anne Walters, a mother who became a citizen activist during the Flint, Mich., water crisis. She spoke about how her family has been affected by drinking the water. The panel discussion was with Marc Edwards, PhD, MS, a professor of Environmental and Water Resources Engineering at Virginia Tech who has worked with Walters to raise national attention to solve the problem.

Other speakers highlighted some of the tools that could or have been used to gather data and how it could be applied to improving health care.

Working Toward the Next Steps

During the second day of the summit, participants broke into groups to work on ideas they identified as worth pursuing at the end of the first day. The topics included:

Bibbins-Domingo, Desmond-Hellmann and others urged the participants to use the summit as a step toward implementing change in precision public health.

She said great changes occurred in the precision medicine sector after UCSF hosted the OME precision medicine conference because of the strong leaders who attended and pushed through new initiatives and funding. She asked for the attendees to become the ambassadors for precision public health.

DJ Patil, chief data scientist from the White House Office of Science and Technology Policy, wrapped up the summit by pledging that precision public health initiatives have the full support of the Obama Administration.

“You have the commitment of the White House to be focused on this with you,” he said. “You have the focus of the President on this, because this is one of his top priorities.”

UCSF’s hosting of the summit was the latest example of UCSF’s leadership in precision medicine. The term precision medicine was coined in a 2011 National Academy of Sciences report that Desmond-Hellmann, then chancellor of UCSF, co-authored with Charles Sawyer, MD, chair of the Human Oncology and Pathogenesis Program at Memorial Sloan Kettering Cancer Center.

Hawgood has continued UCSF’s leadership role in precision medicine, including working toward health equity as a top priority in his administration because it is central to the University’s overarching institutional vision.

Among the precision initiatives from Brown’s office is a new Precision Medicine Impact Challenge that was announced during the Precision Public Health Summit by Butte and Elizabeth Baca, MD, MPA, from the Governor's Office of Planning and Research. The winning entrant from the challenge will win a $10,000 prize from Singularity University.

Watch the presentations from the summit: