Now as a professor at UCSF, he routinely incorporates issues of diversity while teaching in the schools of medicine and pharmacy about genetics, ancestry and how populations respond differently to drugs. His research focuses on identifying genetic and environmental risk factors for asthma and drug response or pharmacogenetics in ethnically diverse pediatric populations. 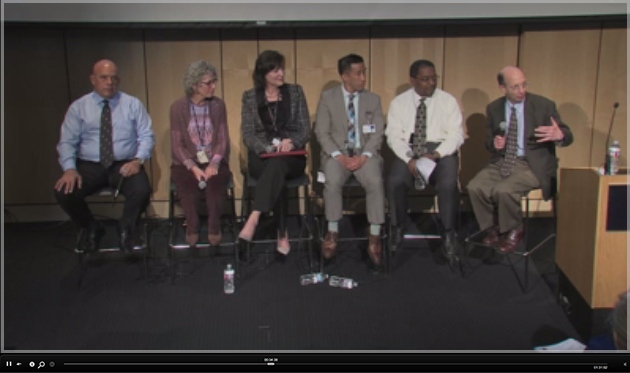 The ninth annual Chancellor's Diversity Forum provided a chance for faculty, staff and students to engage in a conversation with campus leadership.

“We not only practice what we preach about diversity, but we actually walk the talk in the clinic and in what we publish,” said Burchard who was among panelists of the ninth annual Chancellor’s Diversity Forum on April 13.

Burchard said he is optimistic about UCSF’s commitment to diversity, equity and inclusion by relaying an example of how UCSF leadership supported the publication of a paper he and others wrote about diversity in National Institutes of Health (NIH) research. The team’s research found that in 23 years of using public funds to support NIH-funded research, 95 percent of that work was conducted primarily on study populations of European descent.

Concerned that UCSF could potentially be adversely affected in NIH funding if his team published the findings, Burchard met with UCSF Chancellor Sam Hawgood, MBBS; Talmadge King, MD, dean of the School of Medicine; Joe Guglielmo, PharmD, dean of the School of Pharmacy; and Tejal Desai, PhD, chair of the Department of Bioengineering and Therapeutic Sciences. The discussion before the paper’s publication was about whether he should retract it.

“I was uniformly told to keep going,” he said. “I was very encouraged to have the support of a great university behind me that gives me a soapbox to help change the world.”

Burchard’s story drew applause from the audience gathered at the forum sponsored by the Office of Diversity and Outreach. The office, which promotes diversity, equity and inclusion across the University, presented the forum to share with the campus community the highlights of the initiatives and activities over the past year. The gathering, which was live-streamed, provided a chance for faculty, staff and students to engage in a conversation with campus leadership.

“This is an important opportunity for us to delve deeply into what we are doing and who we are as a campus,” said Renee Navarro, MD, PharmD, UCSF’s vice chancellor of Diversity and Outreach since 2010.

Navarro presented a snapshot of progress made since the establishment of the office. In terms of demographics, she said, UCSF has made small increases in the percentages of Asian and Hispanic faculty, but no gains yet in the percentages of African-Americans or Native Americans. She noted that the gains in underrepresented minorities were most significant among students and staff.

Susan Schultz, MBA, an associate dean at the School of Dentistry and its only staff associate dean, praised the strides made in increasing the diversity of staff, with a caveat: “My concern is that the progress is at lower-level staff, and we need to make progress at the supervisor, manager and director level,” she said. “If I am sitting at a high-level meeting, I’m looking around the room and I don’t see a lot of diversity there.”

A number of initiatives have been implemented to address the issues of bringing in and retaining a diverse UCSF workforce and student population, but one large issue that repeatedly surfaced during the forum is the high cost of living in the San Francisco Bay Area. The panelists agreed that there are ample rewards beyond financial that accompany a comfortable inclusive workspace, but that the realities of living in the area still exist.

“But we need to pay the rent as well,” said Erica Monasterio, RN, MN, FNP, a professor at the School of Nursing, where she co-directs the Diversity in Action (DIVA) committee, a longstanding group dedicated to advancing equity and inclusion.

'Not Complacent About These Issues'

The overarching theme of the diversity forum was that much has been achieved already – but there is also much room for improvement.

“I travel a lot and go to other universities, other audiences look nothing like this, not even close,” said King. “We have accomplished a lot at UCSF. We have to recognize that we have done a great job – but we have a lot more to do.”

Navarro mentioned key projects that have unfolded in the last few years, noting that nearly 15,000 people have participated in training sessions – on topics such as unconscious bias and transgender issues – and more than 17,000 have attended any of 142 programs under the umbrella of “campus climate,” such as cultural heritage and awareness events, diversity dialogues and pride celebrations. Other initiatives included a Staff Resource Day, the “Injustice and Health” teach-in, the launch of the Diversity Hub and the establishment of the School of Medicine’s Differences Matter initiative.

Executive Vice Chancellor and Provost Daniel Lowenstein, MD, also said he felt pride of accomplishment, tempered by frustration, about what remains. He assured the audience that diversity and inclusion issues are a top priority for the entire University.

“In my year of being involved in campus leadership, I can tell you straight out there is not a day that goes by where these aspects of our community are not actively being discussed,” Lowenstein said. “The leadership of this institution is not complacent about these issues,” noting the number of members of UCSF leadership the audience. “We are here because of how much we care.”