During only the second teach-in in more than two decades at UC San Francisco, speakers engaged in a emotional discussion about injustice, intolerance and inequities and their profound impact on health in America.

The three-hour event was filled with laughter, applause and tears from the packed audience as UCSF panelists shared their heartfelt stories of tragedy and tenacity. 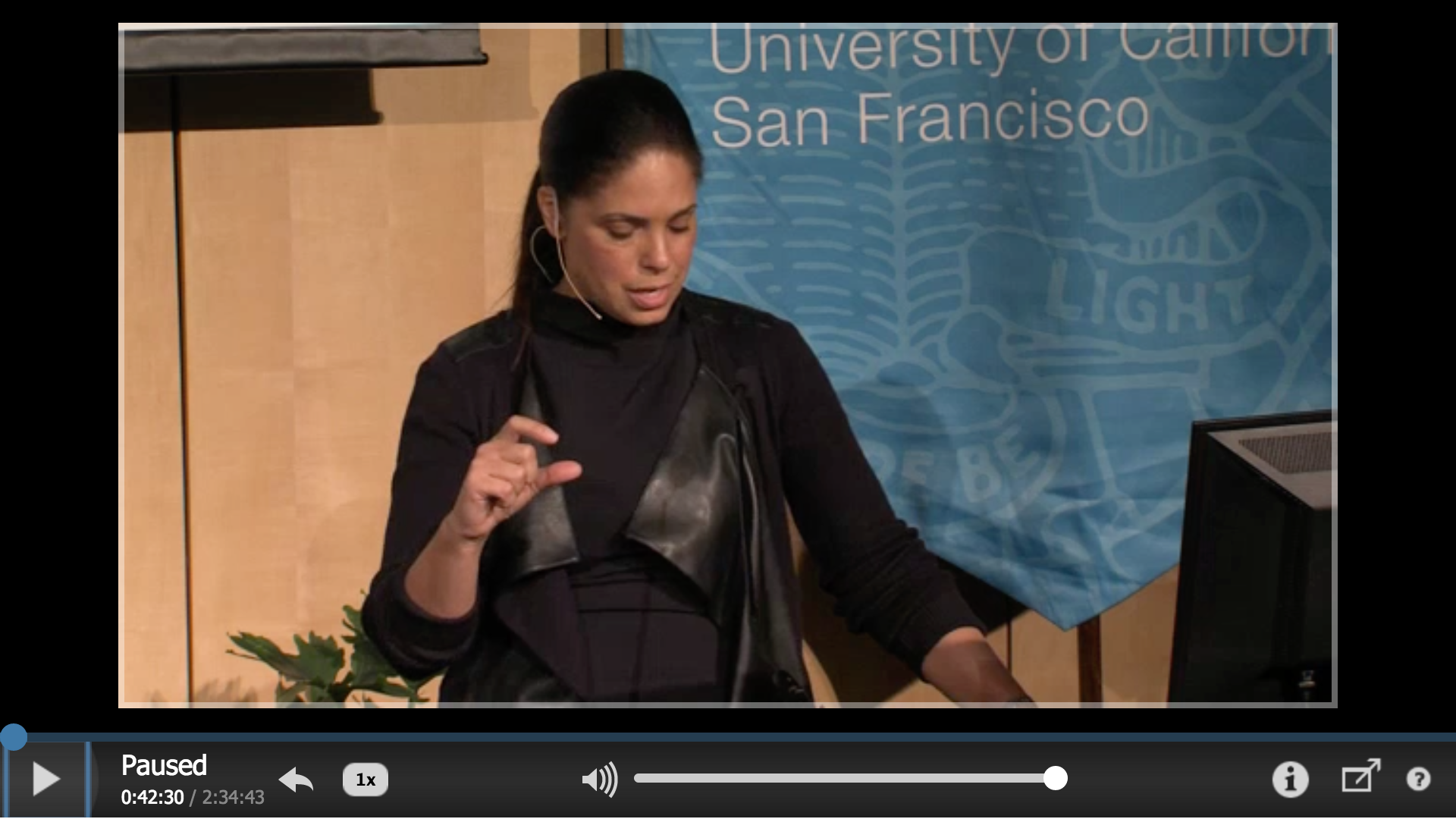 See the full teach-in, "Injustice and Health," moderated by Soledad O'Brien on Feb 24.

It was a year ago when Suzanne Barakat, MD, a second-year resident in the Department of Family & Community Medicine at Zuckerberg San Francisco General Hospital and Trauma Center, lost her younger brother, his new wife and her sister, who were fatally shot as they were eating dinner. The killing of her brother, Deah Shaddy Barakat, 23, a dental student at the University of North Carolina, Chapel Hill, and the two women ignited a debate over how Muslims are treated in America.

Since then, Barakat has emerged as a leading Muslim-American voice calling attention to Islamaphobia on the national stage. She met with President Barack Obama during his first visit to a mosque earlier this month.

Barakat also fights against Islamaphobia while treating patients at the UCSF-afffiliated Zuckerberg San Francisco General. She recounted a couple of incidents with one patient, who upon seeing her headscarf referred to the killings in San Bernadino by radical Islamists. Both times, Barakat said, her health care colleagues, who were making rounds with her, said nothing in her defense. During the second visit, Barakat sat down at the patient’s bedside and gently questioned her about her beliefs, which resulted in the patient apologizing profusely in front of the medical team.

“I found it helpful to stand up to bigotry, and the basic rule is not to be silent when you see it,” she said. “It’s easy for the discomfort to allow you to be a passive observer, but that’s not OK.”

Barakat, who now suffers from post-traumatic stress disorder following the murder of her family members, said every time she appears in public to speak out, it takes an emotional and physical toll on her. “Part of why I am here is to encourage you to be advocates,” she said. “Your silence is acceptance of the bigotry.”

The teach-in – the first of its kind at UCSF since faculty led a teach-in to protest the Iraq War in 2007 ­­– is part of an ongoing effort to engage the UCSF community in a candid conversation about race, social justice, health sciences education and patient care. About 400 attended the teach-in at Cole Hall and another 400 watched the live web cast at various locations.

Alejandra Rincón, PhD, chief of staff in the Office of Diversity and Outreach who proposed and organized the teach-in, says the event coincides with a particularly raucous and dangerous time, which she described as the “crossroads of a world in crisis.”

“Today UCSF made history,” Rincón said. “By calling for this teach-in, we have made a statement that issues of racism, discrimination, Islamophobia and health care disparities should not be ignored. By doing so, we affirm that we care, and that we too want to be part of efforts toward a better society, a better tomorrow, when one day we will relegate such problems to ancient history.”

Last year, UCSF held a retreat for its top leaders that focused solely on topics of unconscious bias, micro-aggression and institutional barriers to equity and inclusion. In October, UCSF Chancellor Sam Hawgood, MBBS, announced that championing equity and inclusion and addressing health disparities is one of the top four priorities in his administration.

Dan Lowenstein, MD, executive vice chancellor and provost, acknowledged the importance of the teach-in in tackling the myriad challenges facing UCSF and the nation. “Raising awareness and taking action is a core part of our mission. We’re proud of what we do, but there is a lot more that we can do better.”

Latina immigrant Andrea Quiñones-Rivera, a second-year medical student in the PRIME program for the Urban Underserved, said one of the reasons White Coats for Black Lives started at UCSF is because minority students, some from low-income families who have experienced violence and racism firsthand, could no longer be silent.

“Justice is a core tenet of what we do in health care,” said Sidra Bonner, a third-year medical student and co-founder of the White Coats for Black Lives movement. “I don’t think you can provide ethical health care if you don’t think about justice.”

One of the challenges in speaking out is the hierarchy of the health care system, Bonner said. “We need to begin holding all medical schools accountable for the way they are training the next generation. We need to focus on bias, inclusion and social determinants of health.”

The UCSF School of Medicine is doing just that through its “Differences Matter” initiative, an effort launched last year to strengthen its commitment to creating a culture that is inclusive and supportive and incorporating these and other topics into the curriculum.

Phuoc Le, MD, MPH, an assistant clinical professor of Medicine and Pediatrics at UCSF, believes medical training should encourage health practitioners to take the time to fully understand the narrative of their patients to enable them to provide the best care possible. He recounted his early years as a Vietnam refugee whose family faced financial hardships, dependent on food stamps and Section 8 housing. Today, Le brings that perspective to his patients, providing compassionate care.

“The people who have the greatest need have the least opportunity to get the best care,” she said. “African-Americans bear the greatest burden of cancer, by far, for all of the most common cancers.”

Pasick, who lost both parents to cancer by the time she was 20, hopes UCSF will be a champion so that everyone has access to high-quality cancer care. She’s encouraged that Alan Ashworth, PhD, president of UCSF’s cancer center, has begun an initiative to change the burden of cancer throughout San Francisco.

Howard Pinderhughes, PhD, associate professor of Social and Behavioral Sciences in the UCSF School of Nursing, also has devoted much of his career to improving health by studying the relentless exposure to violence on youth.

Growing up in a middle-class family in a poor, black neighborhood of Roxbury in Boston, Pinderhughes was just six years old when he saw the victim of a homicide lying in a plastic bag across the street from his house. He believes UCSF can make a real impact in addressing health disparities and their social determinants of health, including housing, education and employment.

“We’re the second-largest employer in San Francisco, and if we committed to having an impact on the social determinants of health – to creating pipelines for thousands of jobs – we could shift the levels of health and violence and well-being in a lot of communities.”

Asked if the panelists are optimistic about the future, Pinderhughes put it this way: “I’m hopeful, I work with young people. I am hopeful because our current administration at this University, has a commitment to these issues of injustice and health. I think we have an enormous opportunity to make a difference in our communities.”

Life of a Storyteller

Award-winning journalist Soledad O’Brien – who served as a keynote speaker and has toured campuses across the country leading discussions about intolerance and discrimination in America – shared her own story as a woman of color before moderating a panel discussion with UCSF faculty and students.

Growing up as the fifth of six children of a white father and black Cuban mother, O’Brien recalls her mother honking at protestors who were objecting to blacks moving into their mostly white neighborhood as she attempted to pull into their driveway. She remembers overhearing her colleagues referring to her as an affirmative-action hire when she began her TV news career after graduating from Harvard University.

O’Brien was critical of the broadcast news business for reporting sensational and superficial stories while sugarcoating or completely ignoring the more substantial issues affecting the health of humanity.

Covering Hurricane Katrina was an eye-opening realization that the real story was about the prolonged suffering of the mostly poor, black residents of New Orleans. It represented a “complete failure to help people who needed it the most,” she said.

That’s why she started her own production company to tell in-depth stories of the struggles inside America. Through it all, O’Brien still believes what her mother says to this day: “America is better than this.”