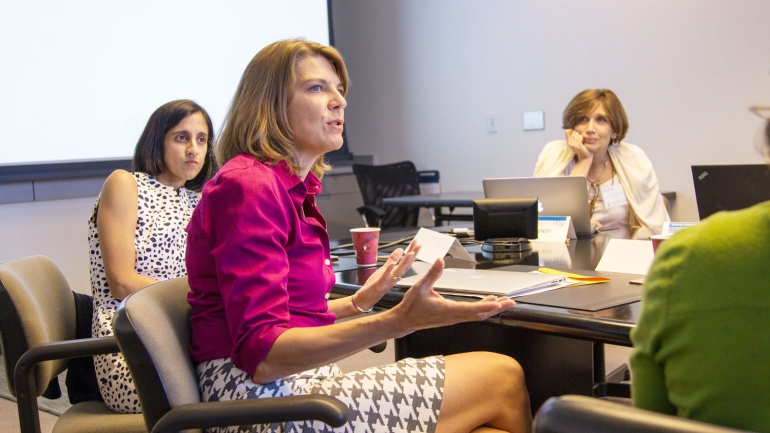 UC San Francisco has identified several departments in which female faculty were paid less on average than their male counterparts for comparable work and is actively working to correct those inequities, according to a recently released report.

Identifying and correcting inequities is part of a broad effort throughout the University of California system to address inequities in compensation for women and underrepresented minorities, particularly in light of studies that have demonstrated a persistent problem of unequal payment at universities around the country.

In 2012, then-UC President Mark Yudof launched an unprecedented effort and charged each campus with the task of evaluating faculty salaries. The work to end inequities does not stop with this report and the corrective measures to be taken. Each campus has been directed to revisit the issue of gender equity in faculty salaries within two years.

The UCSF faculty salary equity review committee – led by Vice Provost of Academic Affairs Brian Alldredge, PharmD, and consisting of members of the administration and the Academic Senate – released its campus-level analysis last year. It reported, among other things, that female faculty members, on average, receive salaries that are 3 percent lower than their male counterparts within the UCSF faculty. The analysis did not identify any salary inequities related to underrepresented minorities.

UCSF Chancellor Sam Hawgood, MBBS, directed the deans of the four health professions schools at UCSF – dentistry, medicine, nursing and pharmacy – to review their salary structures and recommend measures to correct any inequities. The Faculty Salary Equity Review committee reconvened in the fall, and issued its report in late January 2016.

UCSF submitted data from the report to the UC Office of the President on Feb. 1, as requested by UC President Janet Napolitano.

“We are encouraged that this study finds that by and large, most women faculty at UCSF are paid equitably with their male counterparts,” Hawgood said. “We have already addressed some inequities and will make the outstanding salary adjustments for the others quickly and retroactive to July 1, 2015.”

Results Broken Down By School

The report notes that no salary inequities were found in UCSF’s schools of dentistry, nursing and pharmacy.

The report can be interpreted in different ways, Alldredge noted. “The campuswide inequity was 3 percent, which is disturbing to some, but encouraging to others who see the figure as small,” he said. “The important thing is, we didn’t just put the report on the shelf and pat ourselves on the back that it wasn’t higher. We did the work to correct it.”

Complexities in the Salary Analysis

The faculty salary equity study examined 1,900 of UCSF’s roughly 2,500 faculty members, Alldredge said. It did not include any faculty who work less than 75 percent time, or faculty at the Veterans’ Affairs Medical Center, Gladstone Institutes, or the Howard Hughes Medical Institute. It also did not include anyone with the title of instructor.

“We evaluated each school’s findings regarding salary imbalances in order to identify inequities that warrant correction,” Alldredge said. “For instance, in some cases a salary imbalance was found but further analysis demonstrated that the difference was explained by other factors, such as subspecialty within a department or grant productivity,” Alldredge said.

The committee also sought to make apples-to-apples comparisons; in some cases, recommending “matched pair analyses” to look in detail at two people who do similar work. The report did not address salary differences across different disciplines; for example, whether cardiologists did (or should) make more money than internists. However, the committee carefully analyzed whether men and women faculty within the same discipline were paid equitably.

In other cases, the committee noted, the analyses did not identify an imbalance because a department has few, if any, women or underrepresented faculty members, which raised other issues outside the committee’s purview.

“Complexities surfaced,” said Leah Karliner, MD, an associate professor of medicine in-residence who represented the Academic Senate Committee on Faculty Welfare on the salary committee. “We made recommendations around some of those issues. I encourage people to read the executive summary to see where future work could be done specific to our campus that may not be required by the UC Office of the President.”

A bright spot in the area of gender equity recently came from STAT News, which reported that UCSF has the highest percentage of women who are full professors among the top 10 nationally ranked medical schools. Using the latest data from the American Association of Medical Colleges, STAT News found that women represent 32 percent of all full professorships at UCSF, as compared to 21 percent at medical schools nationwide.