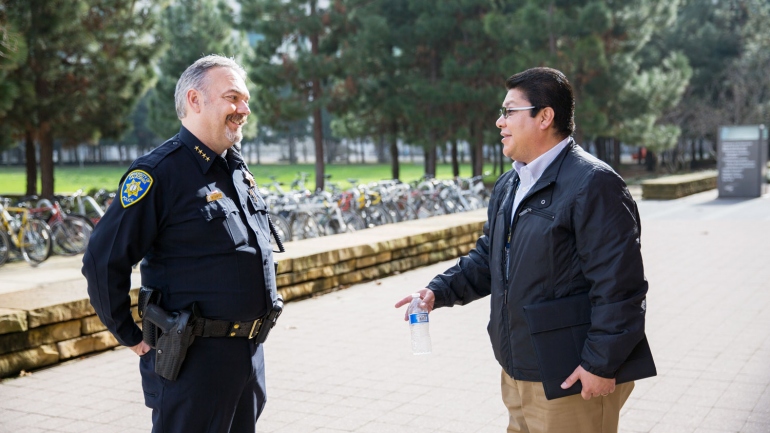 Mike Denson has spent decades in some of law enforcement’s most challenging positions – investigating homicides, negotiating hostage situations and leading a regional SWAT team. When he came to UC San Francisco, he was excited by a different challenge: building a strong community that partners in its own safety.

That’s the approach Denson plans to build upon as the new chief of the UCSF Police Department.

“I don’t want to be a big police department that no one talks to,” he says. “I personally really enjoy engaging with the community, getting to go out there and talk to them and have them contact me with any ideas they have.” 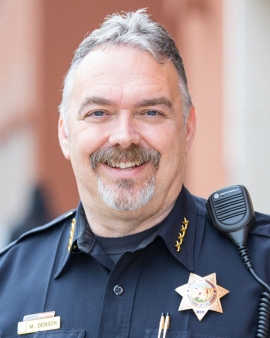 Before joining UCSF, Denson served as deputy chief of police at the San Mateo County Transit District, in charge of public safety and risk management for an 88-mile rail and bus system. Prior to that, he spent 21 years with the Palo Alto Police Department, where he retired as a captain.

Denson joined UCSF in 2012 as captain of the Field Services Division, second in command to Chief Pamela Roskowski. He has been serving as interim chief of UCSF Police since July 2015, when Roskowski retired after more than 12 years at the helm.

“Given his extensive background and commitment to UCSF and our public safety, Mike is the ideal candidate for this important role,” Teresa Costantinidis, interim senior vice chancellor for Finance and Administration, said in her announcement of Denson’s new role last month.

Among Denson’s many ideas for UCSF is introducing the concept of “community governance,” in which the community actively partners in the department’s plans. He plans to establish a chief’s advisory board to gather a range of UCSF participants to help generate ideas and engage them in problem-solving. “I really like that model of the community actually participating in the direction the department is going,” he says.

Increasing transparency is one of the main things he wants to accomplish as chief, with ample communication between the department and everyone who is part of the University. “I want us to be an open book,” he says.

One challenge is overcoming the spread of his jurisdiction. Denson leads a department responsible for the safety and security of the entire UCSF campus – every building and one mile surrounding, which makes it a good portion of the entire city. His team of 142, including 56 sworn officers and 60 security officers, responds to an astounding 65,000 calls per service per year.

“I go out to walk throughout the whole campus quite a bit,” says Denson. “I look forward to meeting any faculty, staff, students and visitors, and I welcome them to ask me anything they would like to know or give me ideas to consider. I became an officer in the first place to help people, and I think my role as chief really enhances my ability to do so through an entire department.”