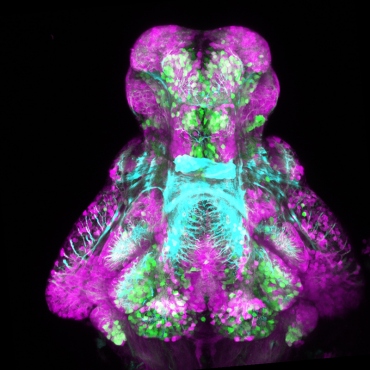 A zebrafish brain, viewed from below, was labeled by the researchers to show nerve cells that use the neurotransmitters GABA (green) and glutamate (magenta), with fiber tracts running among the neurons labeled in light blue. In fish carrying the autism risk gene, the scientists observed abnormalities in both GABA and glutamate neurons.

In an unexpected finding, an international team of scientists has discovered that estrogens reverse a striking behavioral abnormality in zebrafish carrying mutations in a gene known to cause autism in humans. In addition to providing new insights into neurochemical imbalances underlying autism, the authors said, the work may help unravel the “female protective effect” – the unknown factors by which girls are on average four times less likely than boys to be diagnosed with autism.

As reported in the Jan. 28 online issue of Neuron, zebrafish in which all copies of the gene called CNTNAP2 had been removed are significantly more active at night and more prone to seizures than counterparts carrying normal copies of the gene. These characteristics directly mirror the situation in humans, in whom the loss of both copies of CNTNAP2 leads to autism and epilepsy.

The nighttime hyperactivity in the mutant fish was reversed, with no other apparent effects on behavior, when the research team, led by first author Ellen J. Hoffman, MD, PhD, of Yale School of Medicine’s Child Study Center, administered a plant-derived estrogen compound or a synthetic version of the human female sex hormone beta-estradiol.

By contrast, risperidol, a drug approved by the Food and Drug Administration to treat irritability and aggression in people with autism, eliminated nighttime hyperactivity in the CNTNAP2-mutant fish but also reduced their activity during the day, suggesting that estrogens may more precisely target brain pathways affected by CNTNAP2 mutations.

While cautioning that one cannot be certain that the behaviors seen in zebrafish are faithful representations of similar symptoms in humans, UC San Francisco’s Matthew W. State, MD, PhD, co-senior author of the new study, said that both sleep disturbances and seizures are common and troublesome problems in individuals with autism.

“Model systems like the zebrafish allow us to take a genetic abnormality that we know causes a particular syndrome in humans and to learn something profoundly important about the molecular, cellular, and circuit mechanisms by which mutations in humans lead to disease,” said State, chair and Oberndorf Family Distinguished Professor of Psychiatry at UCSF. “It’s possible that, with further research, we’ll begin using zebrafish to identify novel treatments that could well extend to individuals with autism, regardless of whether they carry CNTNAP2 mutations.”

The study was conceived almost seven years ago in discussions between State and co-senior author Antonio J. Giraldez, PhD, a zebrafish expert at Yale School of Medicine. At that time State was launching large genomic studies that have since identified dozens of autism risk genes, while Giraldez was just embarking on new gene-editing experiments in zebrafish, a species favored by biologists because it shares many genetic and physiological features with humans.

“Our study shows the strength of using zebrafish mutants as a platform to identify compounds with relevance to autism, though there is much more work to do before this can be applied to humans,” Giraldez said.

Zeroing in on the estrogen compounds was made far more efficient thanks to a series of “behavioral fingerprinting” experiments conducted by co-senior author Jason Rihel, PhD, of UCL (University College London), in which normal zebrafish were exposed to 550 drug compounds, and the behavioral changes induced by each compound were carefully recorded.

When Hoffman and Giraldez observed the unexpected nighttime hyperactivity in the CNTNAP2-mutant fish, they consulted Rihel’s data for compounds associated with an “opposite” behavioral fingerprint—drugs that promoted nighttime sleep. They found that two estrogen compounds Rihel had tested were able to eradicate the fishes’ hyperactivity at night without affecting their daytime behavioral patterns.

State said that the work reported in Neuron was begun before the rise of the powerful gene-editing technology called CRISPR, and that creating the CNTNAP2-mutant zebrafish was far more laborious than it would be today. Using CRISPR, State, Giraldez, and colleagues have since collaborated on the creation of dozens of mutants corresponding to the highest-confidence autism risk genes, which should rapidly advance research using the zebrafish model.

“Despite the fact that the human brain and our behavior are incredibly complex, aspects of the genetic and molecular makeup of the central nervous system have remained remarkably consistent across organisms, including zebrafish, over evolutionary time,” State said. “Our new findings may not explain the female protective effect, but gaining some traction around the molecular mechanisms of estrogen action through this model could be an important building block in answering that question.”

State, Hoffman, Giraldez, and Rihel were joined in the research by colleagues from Yale School of Medicine; UCL; Boston University School of Medicine; the University of Pennsylvania Perelman School of Medicine; Haverford College, in Pennsylvania; the Max Planck Institute of Neurobiology, in Martinsried, Germany; the Semel Institute for Neuroscience and Human Behavior, at UC Los Angeles; the University of Texas at Tyler; and Smith College, in Massachusetts. The work was funded by the National Institutes of Health; the Overlook International Foundation; the American Academy of Child and Adolescent Psychiatry; the European Research Council; UCL; and grants from the Biotechnology and Biological Sciences Research Council of the UK, the European Union, and the Wellcome Trust.