The city offers its residents and the UC San Francisco community an abundance of benefits, from its thriving culture of innovation to its surrounding natural beauty. Those benefits, however, have come at a cost – especially in recent years, as housing costs have skyrocketed and competition for affordable units has grown fierce.

San Francisco’s housing crisis is of real concern to UCSF, whose success as a top-ranked health sciences university is inextricably tied to its ability to recruit and retain the best students and faculty. The issue also has important ramifications for the city, where UCSF has enormous impact on the local economy and plays a critical role in providing care to its residents. 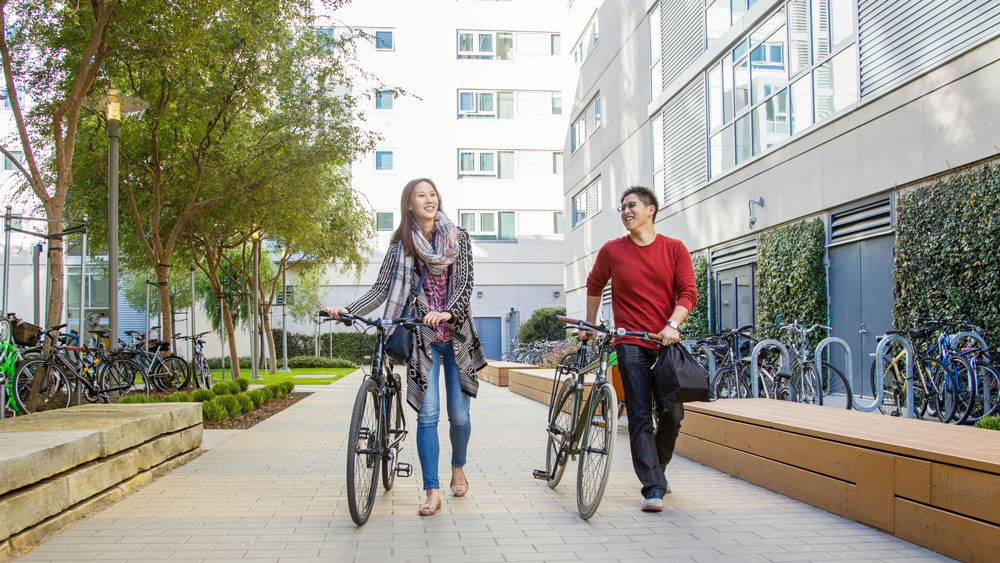 Read the latest updates about UCSF's efforts to ensure that it remains an affordable place to work and learn.

“For UCSF, the greatest current threat to our excellence is the high cost of living in our community,” Dan Lowenstein, MD, UCSF’s executive vice chancellor and provost, said at a recent meeting of the Bay Area Council. “UCSF’s success in life sciences research, education and patient care has been what attracts the best, most passionate and brightest students, staff and faculty. But we’re losing talent at all levels in all segments of our community.”

Lowenstein and Clare Shinnerl, associate vice chancellor of Campus Life Services, have been leading UCSF’s efforts to urgently develop solutions to address the housing dilemma, which include a mix of new land acquisitions and innovative partnerships. One exciting new plan involves a collaboration with UC Hastings College of the Law that could provide more than 1,000 new housing units for the two campuses on existing UC Hastings properties.

“This is one of a number of creative approaches that we hope will address that need, while also lessening our impact on the city’s constricted housing situation,” Chancellor Sam Hawgood, MBBS, said in signing a Letter of Intent for the project.

The Country’s Most Expensive Rental Market

While housing prices throughout the Bay Area rank among the highest in the United States, San Francisco stands in a class by itself. 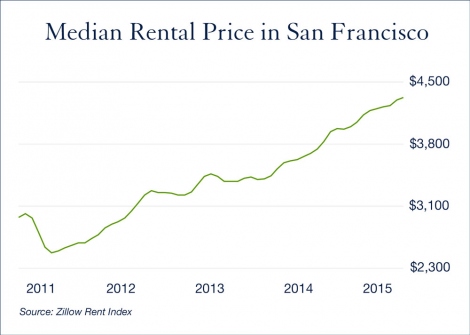 Median rents for all housing units in San Francisco have risen 47 percent in the last five years.

According to external real estate indexes, median rents in San Francisco have risen 47 percent in the last five years, and in 2014, San Francisco rents became the most expensive city for renters in the country.

The average rent for a San Francisco apartment is equal to approximately half the pre-tax stipend received by most UCSF PhD students, according to UCSF Housing Services data. And while the U.S. Department of Housing and Urban Development designates families who pay more than 30 percent of their income for housing as cost-burdened, students do not qualify for federal assistance.

Costly housing is an obvious hindrance that makes it difficult for graduate and professional students, postdoctoral scholars, fellows and clinical residents to attend UCSF. Furthermore, some who do opt to attend UCSF must relocate to San Francisco with families in tow and require larger – and more expensive – living spaces.

The high cost of living also can have adverse effects on research and clinical productivity, according to Lowenstein. Many promising junior faculty who support families must spend time trying to increase their compensation to cover basic living expenses, he explained.

While the affordability crisis has negatively impacted the entire community, including staff and other faculty, Lowenstein says the initial focus will be on creating more housing for students and junior faculty, since these groups are often hardest hit when determining whether they can afford to join the UCSF community. In addition, the work group is collecting systemwide data to assess the full scope of the problem among the campus community.

“We have the most complete data on our students. We know what they need and want,” Lowenstein said. 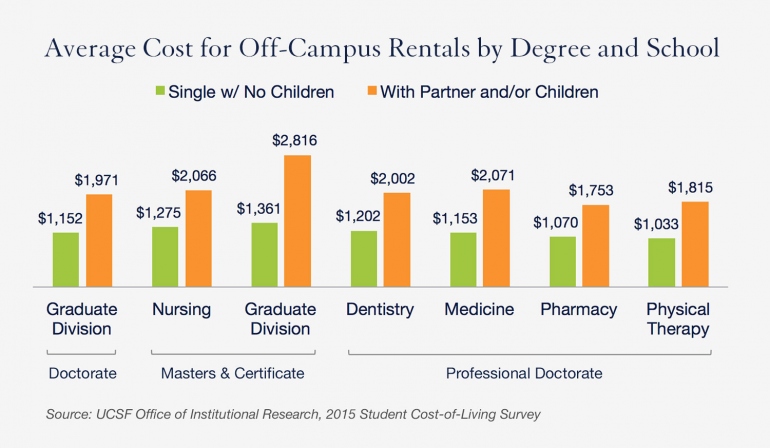 UCSF Housing Services, a division of Campus Life Services, currently offers a variety of living spaces for students and trainees on the Parnassus and Mission Bay campuses. These units, available through a lottery system, are significantly more affordable than off-campus housing. As of spring 2015, UCSF campus housing listed at 36 percent below market value, but that gap widens each month as off campus rates climb.

While the Inner Sunset and Mission Bay neighborhoods surrounding the two UCSF campuses were traditionally affordable, rents have skyrocketed in both areas. Demand for on-campus rental housing now far exceeds supply, and UCSF is generally able to meet only about one-third of the total need. UCSF’s current housing portfolio includes 672 units, of which all but about 5 percent are occupied by students and trainees. Hundreds more students/trainees are on a waitlist. 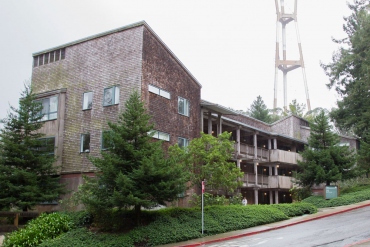 Aldea San Miguel, located on Mount Sutro, is one of five UCSF-owned housing complexes. Plans are under way to pursue at least six new housing developments. Photo by Susan Merrell

“I love having housing at Mission Bay. It’s a fantastic deal that includes all utilities, Internet and shuttle transportation,” said first-year dental student Laura Aguilar Sanchez. “The only bad side is you have to be lucky enough to be picked. It would be fantastic if more students had a better chance of having UCSF housing.”

UCSF’s current Long Range Development Plan (LRDP), adopted by the UC Regents in November 2014, calls for more than doubling the amount of housing at Parnassus and Mission Bay campuses by 2035 and includes plans for converting UC Hall, the Proctor Foundation building, and the Millberry Union towers into additional campus housing.

Yet, the urgent need for affordable housing has prompted more immediate steps, including:

For the Good of the City

Addressing the housing crisis is imperative not only for individuals who come to UCSF to train or work, but also for San Francisco itself. By developing new housing, UCSF is contributing to the City’s overall housing supply.

As a $5 billion enterprise with more than 23,000 employees, the University is the city’s second largest employer and a leader in its thriving health care and burgeoning life science industries. UCSF’s ability to attract top faculty, staff and students also impacts the quality of health care it can provide to patients, some of whom travel long distances for specialized services.

The key to UCSF’s success is its people, who should reflect the economic and cultural diversity of the populations they serve. Keeping the cost of living affordable is crucial to sustaining and advancing the diversity of the UCSF community and the city, Lowenstein said.