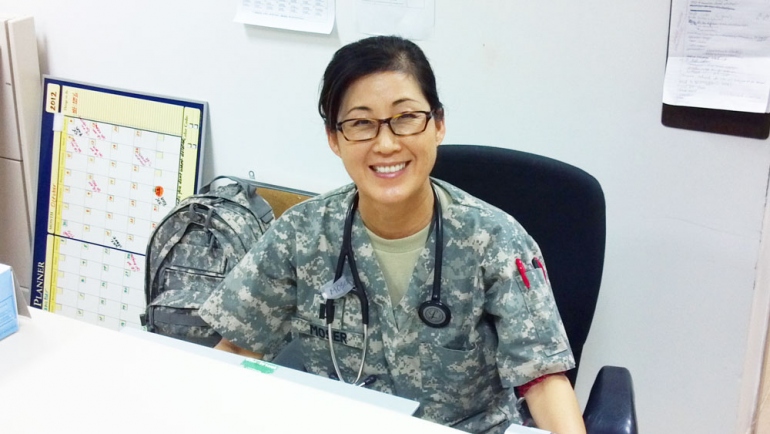 Misun Moser while in the Army Reserves. Image courtesy of Moser

When Misun Serena Moser joined the U.S. Army Reserve in April 2002, she did so largely as an act of solidarity with her son, who was joining the Air Force at the time.

The subsequent 13-plus years in the military have had their ups and downs, says Moser – who is currently a student in the Family Nurse Practitioner Program in the UCSF School of Nursing – but they have only deepened her commitment to veterans.

“I’m always very excited to take care of them,” she says.

A Long and Winding Road

Moser’s path to both nursing and the military are anything but run-of-the-mill.

In the 1980s, she arrived in the U.S. from Korea, where she’d been working as a dietitian and where she had met her ex-husband, a rocket scientist, who came to the U.S. as part of an exchange program and then decided to pursue his doctorate at the University of Maryland. When her marriage ended, Moser found herself a single mother who needed to find a way to support her children. She chose nursing.

She got her RN training at Colorado Mesa University and became a medical-surgical nurse in Colorado, where she worked between 1997 and 2002. But when her son chose to join the Air Force, Moser felt she needed to act.

“I was criticized by my family, but I didn’t feel secure to let him go by himself. … He is my first child, and I am a very strong mother. That’s me. I wanted to understand the system and be prepared to support my son,” says Moser. “I also know war and the military are often necessary to protect our freedom.”

She joined the U.S. Army Reserve, where she’s worked herself up to the rank of major, and says, “I’ve come to understand the military system pretty well, including how I could support my son when I needed to, [which was especially important] when he deployed to Iraq [from May to December 2009].”

In the meantime, Moser continued to pursue her nursing career, moving to Southern California and eventually winding up at the VA Greater Los Angeles Healthcare System. She had a variety of roles over during her many years there, but the bulk of her time was as an intensive care unit (ICU) nurse.

“I mostly took care of older vets who had serious health problems,” she says. “I feel like I am a family member for them, because I’m a veteran too.”

We received soldiers from Iraq and Afghanistan,” she says. “I treated them as my sons ... I really love taking care of people on the front lines, because they are the backbone of the military.
Misun Moser, RN
First-year Nursing Student

Then, in 2011, she transferred to the Department of the Army at Fort Irwin National Training Center, in San Bernardino County, where as a civilian nurse case manager she coordinated medically undeployable active-duty soldiers’ Medical Evaluation Board process – until she herself deployed to Kuwait from July 2012 through June 2013. There, she took responsibility for daily operation of a 24-bed combined ICU and step-down unit at the 349th Combat Support Hospital (Forward), Camp Arifjan, Kuwait.

“We received soldiers from Iraq and Afghanistan,” she says. “I treated them as my sons – I had such empathy and sympathy. I really love taking care of people on the front lines, because they are the backbone of the military.”

The rewards of treating active-duty soldiers might have been all she took with her from the time in Kuwait, except that was also where sexual harassment – which had begun during her pre-training for combat deployment – escalated.

“It’s complicated and difficult … an invisible war,” says Moser. “But as a soldier, I had to survive, and as a Christian, I tried to work with her [the harasser] until I recognized I had to report it.”

The event and its aftermath caused Moser to experience post-traumatic stress disorder (PTSD). Shortly after returning to civilian employment at Fort Irwin and to her Army Reserve unit in California for a short time, she says she chose to transfer to an Army Reserve unit and civilian job out of California to avoid contact with her alleged sexual harasser.

“I was very embarrassed about my PTSD at the beginning, but I finally accepted it and went through treatment,” she says.

She relocated to Oregon and worked for the VA Portland Health Care System, where she worked as a critical care unit nurse and utilization management case manager until she heard of her acceptance to UCSF in July 2014.

Despite the unfortunate experiences that led to her PTSD, Moser still deeply values her military experience and the soldiers she has known and treated.

“I will continue to serve veterans or soldiers,” she says. “Without having a soldier’s experience, including service-related injuries and traumas, the civilian population could not fully understand veterans’ dilemmas and needs.

“I have a lot of commonality. I understand where they’re coming from and can help find the best option for them, carewise.”