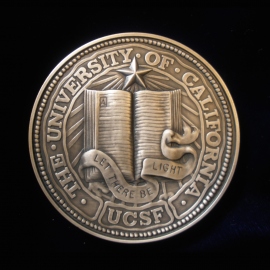 UC San Francisco awarded the UCSF Medal – the university’s highest honor – to three visionary leaders who have advanced health research and care with their contributions.

The UCSF Medal is a tradition started in 1975 by then Chancellor Francis Sooy, MD, and replaces honorary degrees awarded to individuals. Medal recipients are selected by a committee of university and community members every year in a competitive process.

As in previous years, the 2015 recipients’ accomplishments were celebrated as part of the Founders Day celebration of UCSF’s contributions to the people of California.

A San Francisco native, Diller was born at Mount Zion hospital and completed her undergraduate studies at UC Berkeley, where she met her husband Sanford. In her work as a community leader and philanthropist, she served as the Northwest President of the American Friends of Hebrew University and as chair of the Bay Area Friends of the Weizmann Institute of Science.

Diller received many honors and awards for her work, including the Scopus Award from Hebrew University, the Visionary Leader Award from the San Francisco-based Jewish Community Federation, and the Lifetime Achievement Award from the National Society of Fundraising Professionals.

More recently, Diller turned her wealth of experience toward supporting groundbreaking medical research. Diller was an early and strong supporter of UCSF’s Mission Bay campus. In June 2009, UCSF inaugurated the Helen Diller Family Cancer Research Building at Mission Bay, which is focused on cutting-edge work to detect, treat and prevent cancer. In 2007, UCSF renamed its cancer center the Helen Diller Family Comprehensive Cancer Center in honor of Diller's commitment to improving lives worldwide and for serving as a role model who inspires others to make a difference in their communities.

“Helen was a visionary and a tireless philanthropist,” said UCSF Chancellor Sam Hawgood, MBBS. “It is a fitting tribute to her memory that so many people will associate her name with health, hope, and happiness.”

Kathy Dracup is recognized worldwide for her contributions in cardiovascular nursing, particularly her studies on the care of patients with heart disease, and the effects of heart disease on a patient’s family. Her research has appeared in more than 400 scholarly publications.

In 2014, Dracup was honored as a Living Legend by the American Academy of Nursing. She’s the recipient of many other awards and honors, including the American Heart Association's Eugene Braunwald Award for Academic Mentorship in 2003 and a Lifetime Achievement Award from the Heart Failure Society of America in 2011. Dracup was a Fulbright Senior Scholar to Australia, is a Fellow of the American Academy of Nursing, and a member of the Institute of Medicine.

As the dean of the UCSF School of Nursing from 2000-2010, Dracup tripled the school’s research funding and made the school the top recipient of funding from the National Institutes of Health.

“Kathy Dracup is one of the most remarkable individuals I’ve had the pleasure of working with,” says current School of Nursing Dean David Vlahov, PhD. "She is brilliant, generous, well rounded, and has made exemplary contributions to research and society. She embodies the ideals to which we all aspire. Not only is she a superb clinician and scientist, but her influence continues through the many educators and researchers she has mentored over the decades.”

Shirley M. Tilghman, PhD, president emerita at Princeton University, was the university’s 19th president and the first woman to hold the position. She is the current elected President of the American Society for Cell Biology.

A leader in the global scientific community, Tilghman’s research has focused on how genes are controlled during development, particularly via the mechanism of genomic imprinting. Among Tilghman’s honors and awards are the 1996 Princeton President's Award for Distinguished Teaching and the 2013 Lifetime Achievement Award from the Society for Developmental Biology. In 2002, she was one of five winners of the L'Oréal-UNESCO Award for Women in Science and in 2007, received the Genetics Society of America Medal for her outstanding contributions. She is also a member of the Institute of Medicine and a Fellow of the Royal Society of London.

In 2013, then Chancellor Susan Desmond-Hellmann, MD, MPH, named Tilghman to the UCSF National Leadership Council, a distinguished advisory group of renowned leaders in health care, biomedical sciences, and technology to serve as her strategic advisors.