A mouth forms as a single celled animal prepares to multiply, a mutant heart stutters and within a lung, a cell shatters into fragments that keep blood healthy.

These are only a sampling of the stunning visuals submitted to Sci-Resolution, UC San Francisco’s science image and video competition. The first of its kind at UCSF, the competition received more than 140 entries from approximately 50 labs across UCSF campuses. The entries are arresting simply for their appeal as works of art. But each piece also captures unique scientific stories, from routine cellular processes to groundbreaking discoveries about disease.

At the competition awards ceremony on Oct. 28, Executive Vice-Chancellor and Provost Dan Lowenstein, MD, applauded the efforts of the participants and judges. “Those who think of imagery as a way of conveying science play a huge role in enabling the public to see the beauty of the scientific enterprise,” he said.

The winners of the 2015 Sci-Resolution Awards are: 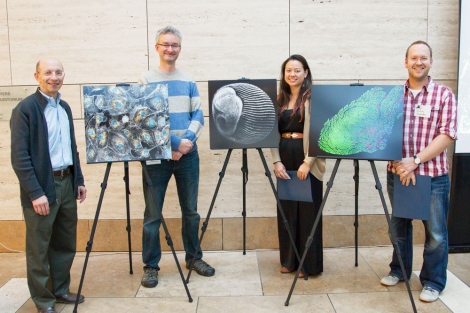 All winners received cash awards that ranged from $150 to $500. Lowenstein and the other judges rated the image and video entries based foremost on their visual appeal, but also on demonstrated technical mastery and scientific import. In the Video category, they opted not to award either a Grand Prize or Runner Up, and instead selected three Judges Favorites.

The Grand Prize image, submitted by Torsten Wittman, PhD, an associate professor of Cell and Tissue Biology in the UCSF School of Dentistry, was of arterial endothelial cells from a cow's lung, created by epi-fluorescence and multi-image stitching. “It’s impeccably and unusually done,” said judge Felice Frankel, research scientist at Massachusetts Institute of Techology and renowned science photographer.

See all the image finalists in the slideshow above, and check out the three Judge's Favorites videos below.

Protein Palette: Different forms of tau protein, one in red and magenta and the other in teal and green, co-localize in a mouse brain.

Homing Hemocytes: Immune cells in a fruit fly cluster in patches; white regions on this intensity map have the most cells, followed by blue and red.

Tipping Point: A growing plant root tip (Arabidopsis sp.) bends as it grows. Cell nuclei are in blue and cell membranes in green.

Bi-lobed Brain: A fly embryo’s two-lobed brain extends into its spinal cord, from where motor neurons branch out to form connections with muscles.

Mouthing Off: A single-celled organism (Stentor sp.) forms a second mouth, ringed by cilia to sweep food in, as it prepares to divide.

Woozy Worms: Two larval nematodes (Caenorhabditis elegans) wrapped around each other while being anesthetized.

Drop Dispenser: The life-blood tubes of a microfluidic dispenser connect to a central computer via 24 valves.