California’s Central Valley is a wide swath of agricultural lands that’s home to nearly 6.5 million people – a population that’s growing more quickly than anywhere else in the state.

With that growth has come a long-standing human problem: an acute shortage of trained primary care and specialist physicians.

In 1975, UC San Francisco started a medical training program in Fresno with one faculty member and a mission to fill this unmet need. Now, in its 40th anniversary year, UCSF Fresno is established as the largest provider of graduate medical education in the Valley, with more than 230 core faculty, 250 residents across eight specialties, and a growing research portfolio. 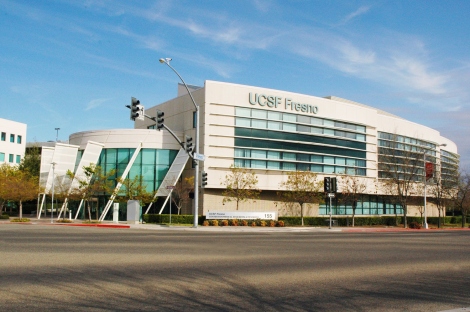 UCSF Fresno opened its Center for Medical Education and Research in 2005 adjacent to the Community Regional Medical Center in downtown Fresno.

Approximately 30 to 50 percent of medical residents choose to live in the region after they complete training – a number that’s gone a long way toward decreasing the lack of skilled doctors. Michael Peterson, MD, interim associate dean of the UCSF Fresno medical program, aims to increase that retention rate to 70 percent.

“When I started here in 2003, I naively thought we’d reach a point where we’d have grown as much as we could,” Peterson recalled with a laugh. “But we’re still growing, and continuing to add in unique subspecialties even today.”

One key to easing the doctor shortage has been to recruit residents and medical students who already have strong ties to the Valley.

With programs such as San Joaquin Valley-PRIME, in partnership with UC Davis School of Medicine and UC Merced, where students spend most of their final two years of medical school in Fresno, Peterson expects to have more doctors who choose to remain in Fresno after they graduate.

“We’re hoping to recruit residents from this cadre of students,” he says. “As we grow the pipeline of medical students coming through, we’ll actually increase our retention in the area.” 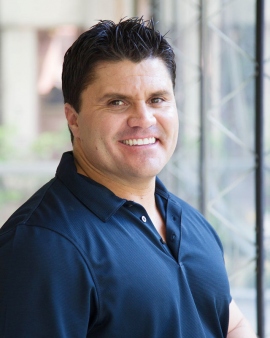 Second-year resident Andres Anaya says being at UCSF Fresno has given him a unique training opportunity: "I’m sure I could do these things somewhere else, but there’s no replacing doing service that helps the place you call home."

To Andres Anaya, MD, a second-year resident in emergency medicine, the choice to stay on was simple. The child of deaf immigrant parents, Anaya remembers the challenges of playing interpreter at his parents’ medical appointments as a child.

“I experienced first-hand the barriers that language can put between a patient and a physician,” he said. “When I practice here in Fresno, there are varying levels of medical awareness, and we need to bridge the gap for each and every patient.”

Beyond being home, however, UCSF Fresno offers Anaya a unique learning opportunity: It’s located on the campus of Community Regional Medical Center, which serves as the only major trauma center between Los Angeles and San Francisco, making it one of the busiest emergency departments in the state. “We see a high volume of patients and the residents have the chance to do a lot, so when you finish, you’ve seen and done so much more than you might have elsewhere.”

“I’m sure I could do these things somewhere else, but there’s no replacing doing service that helps the place you call home,” he adds.

Other valley residents echo the sentiment. Janae Barker, DO, a third-year resident in pediatrics who grew up in nearby Exeter, returned to UCSF Fresno after attending college in Santa Barbara. Like Anaya, Barker often relates to her patients’ backgrounds.

“Here in the Valley, we care for some of the most underprivileged people with so many barriers to care,” said Barker. “I witnessed some of these struggles growing up alongside children of migrant farm laborers, as well as with my own father and grandparents who immigrated here from Azores Islands in Portugal.”

With immigrants from dozens of countries who are now residents, the Central Valley offers unique opportunities for clinical medicine as well as research, according to Peterson.

“We have amazing pathologies, who would fit almost any kind of research study we conduct,” says Peterson. “And second, we have a real diversity of patient populations, something that’s increasingly being recognized in clinical research as crucial for good research.” 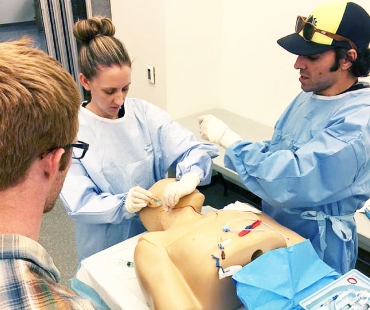 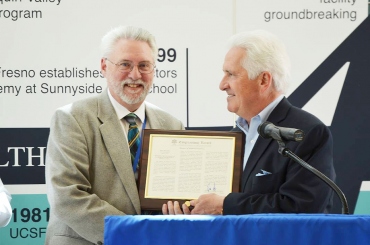 After 16 years practicing pulmonary medicine and critical care, Peterson knew how to deal with common problems when he arrived in Fresno. But in the Valley, a simple soil fungus interfered with diagnoses and familiar tests. Known simply as valley fever – more than 75 percent of cases known have occurred here – the infection causes flu-like symptoms and the formation of lung nodules.

“It became clear that valley fever was very difficult to distinguish from lung cancer in patients through standard tests,” said Peterson.

Clinicians and other specialists set up a coordinated research program six years ago to study the disease. Last year, the group developed a DNA test to detect the fungus within hours, rather than the two weeks that a typical test requires. Peterson and his collaborators have also developed a risk calculator to help differentiate lung cancer nodules from those of caused by the valley fever fungus.

In addition to endemic conditions such as valley fever, residents at Fresno encounter a slew of conditions that range from tropical parasitic infections to complex cardiovascular or neurological issues.

“You can do global health in Fresno without leaving home because our population is so diverse,” said Peterson. “You get the full menu of clinical medicine, from third world conditions to first world diseases.”

In the last 40 years, UCSF Fresno has added 17 subspecialties that aim to meet the Central Valley’s unique health care needs. “Our goal is that we’ll eventually be able to take care of most of the medical needs of the population here without having to send them somewhere else,” Peterson said. 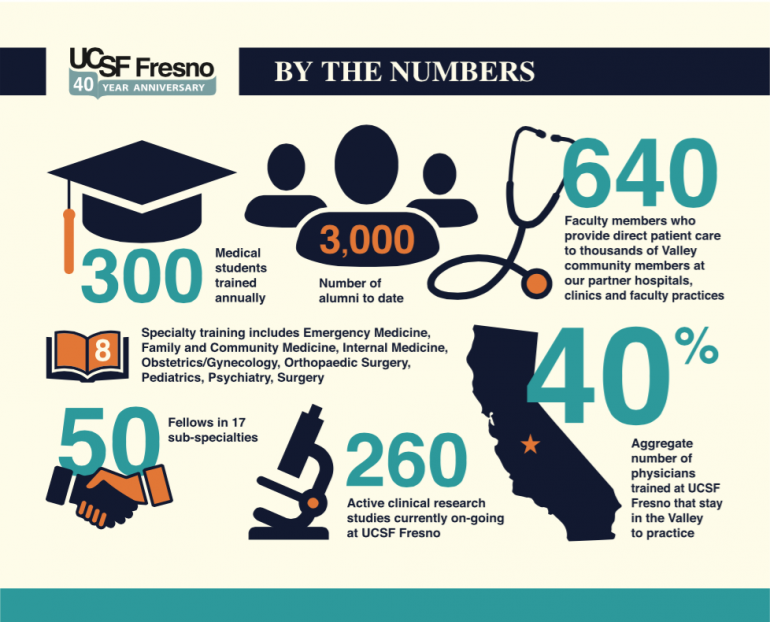 Learn more about the 2015 Back to School season at UCSF »