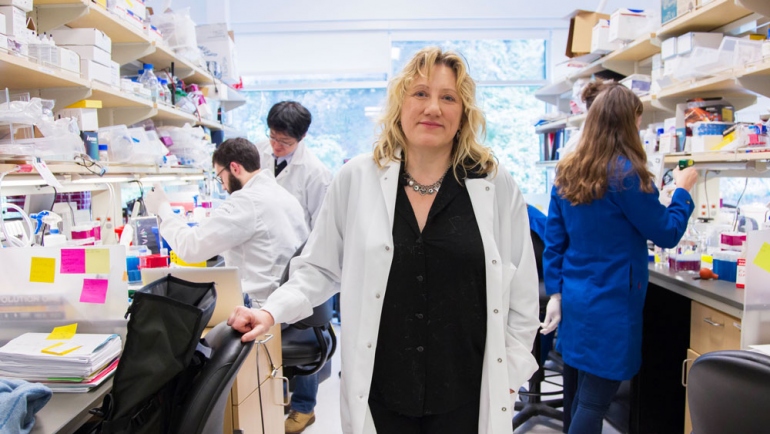 Emmanuelle Passegué’s passion for blood is focused on rejuvenation and longer life. This may sound like something out of a vampire story, but her work is rooted in a different kind of mystery: one that could hold the key to how well we age and respond to diseases.

“I love the mystery,” she says of her work in blood research. “I love asking the question which has not been answered before and to go with whatever approach is needed to get an answer to the question.”

Hematopoietic, or “blood-making”, stem cells give rise to every cell circulating in our blood, be it red, white or platelet. Her focus lies in how those stem cells contend with the ravages of disease, stress and old age.

I love asking the question which has not been answered before and to go with whatever approach is needed to get an answer to the question.
Emmanuelle Passegué, PhD

“When everything is fine, you have balanced production of all blood cells and you are very healthy,” says Passegué, PhD, a professor of hematology and oncology at UC San Francisco.

“When things go wrong, this whole process becomes very aberrant. The question is, can we rebalance it? Can we reshape normal production of blood cells when it goes wrong in disease, for example, or aging?”

Passegué and the team of researchers in her lab at UCSF’s Eli and Edythe Broad Center of Regeneration Medicine and Stem Cell Research, are creating a blueprint of how the blood system works to help answer those questions.

The bone marrow, where the hematopoietic stem cells reside, constitutes the headwaters of the circulatory system – a sort of Lake Victoria to a vascular Nile River. This is the place where hematopoietic stem cells decide what type of blood cells need to be made before being released into the circulation. Recently, Passegué and her UCSF lab team made a discovery that significantly fleshed out the early stages of this process, which they described in a paper in Cell Stem Cell.

Processes known as fate commitment and lineage specification happen in the bone marrow and shape blood production – guiding unspecialized cells down different forks in their path to produce different kinds of blood cells. It’s a bit like students who enter the educational system undecided, but as they choose different majors, wind up with highly specialized skills, whether as historians or particle physicists. The tracks taken at each juncture determine the type of blood cell that will be produced.

The Beauty of Blood Research

Passegué grew up in the small city of Niort, near the French Atlantic coast, immersed in American science fiction and jazz, both of which she still enjoys. Her father was a writer, her mother a painter. 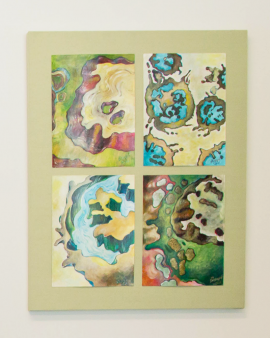 In Passegué's office hangs a painting by her mother, of hematopoietic stem cells. Photo by Susan Merrell

Some of her mother’s paintings are displayed in her office. The subjects, naturally, are hematopoietic stem cells, inspired by electron microscope images she showed her mother. “She just found the images beautiful, as I find a lot of scientific pictures,” Passegué says.

A desire to study molecular biology took her to Paris, where she earned her undergraduate and PhD degrees at the prestigious Collège de France.

During her PhD, Passegué was swept up in the excitement then reverberating through biology over newly developed techniques of DNA manipulation that enabled researchers to genetically tailor mice to suit specific research needs and model the development of human diseases.

Passegué opted to work with those new techniques doing her postdoctoral research at the Institute of Molecular Pathology in Vienna, Austria. However, while making all those genetically altered mice, she realized the technology was not as intriguing to her as studying what happened to the animal. She began studying organ development in mice, including one mouse model that developed a blood disease strikingly similar to a human leukemia.

“That was, for me, the key,” she says, clapping her hands. “I found what I really wanted to do.”

A Pioneer in Hematopoietic Stem Cells 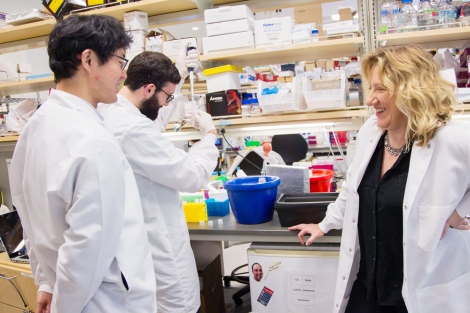 Passegué’s work has helped advance the understanding of hematopoietic stem cells beyond that of stem cell systems in other organs.

“We’re very proud of what she has achieved,” says Arnold Kriegstein, MD, PhD, and director of the Broad Center of Regeneration Medicine and Stem Cell Research. “She has much to contribute to what other investigators in the program are doing in other organ systems,” he says. “Her work is very much a hub for basic issues of stem cell lineages, stem cell aging and more.”

Passegué’s goal is for her discoveries to eventually help develop effective remedies for diseases of the blood, such as leukemia, lymphoma, bone marrow failures and anemia. For the last five years, she has been increasingly interested in how aging affects hematopoietic stem cells.

As we age, our stem cells grow old right along with us. By the time we reach old age, only a few of the hematopoietic stem cells we’re born with are still working well, leaving us increasingly susceptible to infections and blood diseases.

But Passegué thinks if the causes of this age-related decline in functionality can be understood, it might be possible to develop ways to rejuvenate our elderly stem cells, maintaining the health of our entire blood system – perhaps for as long as we live.

“I don’t think maintaining blood production for longer will get us to live 200 years instead of 100 years,” she says. “But certainly we would live a much more healthy 100 years.”