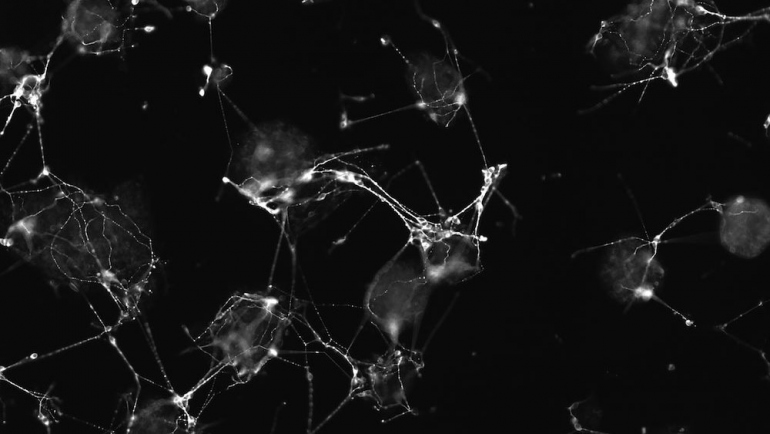 A brain-like network of neural progenitors 96 hours after being stimulated to turn into neurons. Image courtesy of Thomson lab/UCSF

UC San Francisco researchers have for the first time developed a method to precisely control embryonic stem cell differentiation with beams of light, enabling them to be transformed into neurons in response to a precise external cue.

The technique also revealed an internal timer within stem cells that lets them tune out extraneous biological noise but transform rapidly into mature cells when they detect a consistent, appropriate molecular signal, the authors report in a study published online Aug. 26 in Cell Systems. 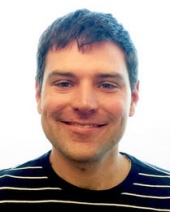 “We’ve discovered a basic mechanism the cell uses to decide whether to pay attention to a developmental cue or to ignore it,” said senior author Matthew Thomson, PhD, a researcher in the department of Cellular and Molecular Pharmacology and the Center for Systems and Synthetic Biology at UCSF.

During embryonic development, stem cells perform an elaborately timed dance as they transform from their neutral, undifferentiated form to construct all the major organ systems of the body. Researchers have identified many different molecular cues that signal stem cells when to transform into their mature form, whether it be brain or liver or muscle, at just the right time.

These discoveries have raised hopes that taking control of stem cells could let scientists repair damaged and aging tissues using the body’s own potential for regeneration. But so far, getting stem cells to follow instructions en masse has proven far more difficult than researchers once expected.

Looking at the Length of the Signal

In recent years, scientists have found that many of the genes encoding these developmental cues constantly flip on and off in undifferentiated stem cells. How the cells manage to ignore these noisy fluctuations but then respond quickly and decisively to authentic developmental cues has remained a mystery.

“These cells receive so many varied inputs,” said lead author Cameron Sokolik, a Thomson laboratory research assistant at the time of the study. “The question is how does the cell decide when to differentiate?”

To test how stem cells interpret developmental cues as either crucial signals or mere noise, Thomson and colleagues engineered cultured mouse embryonic stem cells in which the researchers could use a pulse of blue light to switch on the Brn2 gene, a potent neural differentiation cue. By adjusting the strength and duration of the light pulses, the researchers could precisely control the Brn2 dosage and watch how the cells respond.

They discovered that if the Brn2 signal was strong enough and long enough, stem cells would quickly begin to transform into neurons. But if the signal was too weak or too brief, the cells ignored it completely.

“The cells are looking at the length of the signal,” Thomson said. “That was a big surprise.”

To learn how stem cells were able to weed out fleeting Brn2 signals but respond to persistent ones, co-senior author Stanley Qi, PhD, and co-author Yanxia Liu, PhD, both now at Stanford University, used the CRISPR-Cas9 gene editing system to add a fluorescent tag to the transcription factor Nanog, which normally acts as a brake on differentiation. This protein could then be used as a read-out on the cells’ decision-making.

The team discovered that Nanog itself is actually key to the cells’ impeccable sense of timing. When the Brn2 signal turns on, it disrupts a molecular feedback loop that keeps the cell stable and undifferentiated. In response, Nanog protein levels start to drop. However, the protein takes about four hours to dissipate completely, which makes Nanog an excellent internal stopwatch. If the Brn2 signal is a fluke, Nanog levels can quickly rebound and the cell will do nothing. On the other hand, if Nanog runs out and the Brn2 signal is still on, “it’s like a buzzer goes off,” Thomson said. “And once it goes, it really goes – the cells rapidly start converting into neurons.”

Applying to Other Tissues

“It’s hard for a cell to be both tolerant and fast, to reject minor fluctuations, but respond very precisely and sharply when it sees a signal,” he said. “This mechanism is able to do that.”

Thomson is a fellow in the UCSF Center for Systems and Synthetic Biology, part of a program to recruit young scientists with non-traditional backgrounds, such as physics, engineering, math and computer science into biological research. The fellowship is modeled on the wildly successful Sandler Fellows, a program that for the past 15 years has enabled UCSF to recruit young researchers straight out of graduate school to pursue ambitious high-risk, high-reward science with support from the Sandler Foundation.

Thomson’s ambitious big idea is to use the light-inducible differentiation technology his group has developed to study how stem cells produce complex tissues in three dimensions. He imagines a day when researchers can illuminate a bath of undifferentiated stem cells with a pattern of different colors of light and come back the next day to find a complex pattern of blood and nerve and liver tissue forming an organ that can be transplanted into a patient.

“There’s lots of promise that we can do these miraculous things like tissue repair or even growing new organs, but in practice, manipulating stem cells has been notoriously noisy, inefficient, and difficult to control,” Thomson said. “I think it's because the cell is not a puppet. It’s an agent that is constantly interpreting information, like a brain. If we want to precisely manipulate cell fate, we have to understand the information-processing mechanisms in the cell that control how it responds to the things we're trying to do to it.”