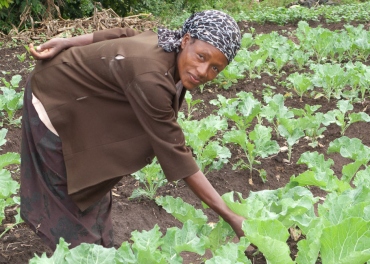 A Kenyan farmer stands in a field of irrigated crops made possible by intervention program Shamba Maisha. Photo by Rachel Steinfeld

A multifaceted farming intervention can reduce food insecurity while improving HIV outcomes in patients in Kenya, according to a randomized, controlled trial led by researchers at UC San Francisco.

The study found that participants in the intervention arm, who received agricultural and financial support, were able to increase the quantity and quality of food consumed.  At the same time, their CD4 T-cell counts increased and their rate of viral suppression increased by about one half. In contrast, both the CD4 cell counts and the rate of suppression fell for those in the control arm.

In sub-Saharan Africa, where 24.7 million people are living with HIV (71 percent of all people living with HIV), 240 million people are food insecure. Food insecurity increases the risk of becoming infected with HIV and food insecure people with HIV are less able to take anti-HIV therapies and make clinic visits, and have poorer nutritional status. Together, those issues make treating and preventing HIV more difficult, leading to sicker patients and more deaths. In turn, once someone is infected with HIV, food insecurity gets worse due to loss of economic activity and productivity, loss of social support due to HIV stigma and the costs of medical care.

“HIV/AIDS and food insecurity are intertwined in a vicious cycle, with each increasing vulnerability to and exacerbating the severity of the other,” Weiser said. “We have the biomedical tools to treat and prevent HIV, but we need interventions like this that combine healthcare with development, and address food insecurity, poverty and disempowerment if we are to achieve the UNAIDS goal of ending the HIV/AIDS epidemic by 2030.”

The results of the trial are available online ahead of print in AIDS.

The trial, conducted over one year at two Family AIDS Care & Education Services (FACES) health facilities in the Nyanza region in Kenya, enrolled 72 participants at one facility for the intervention group and 68 at the other facility for the control group.  Participants were HIV positive individuals between 18 and 49 years old on anti-HIV therapy and all had access to surface water for irrigation and land.

The intervention, titled Shamba Maisha, Swahili for “Farm Life,” had three components.  Microfinance loans were provided by and managed by Adok Timo, a Kenyan microfinance organization, with support from the two collaborating partners in FACES: UCSF and the Kenyan Medical Research Institute.  These loans were used to purchase farming implements and supplies along with manual irrigation pumps designed by KickStart, a non-profit organization that develops and markets new technologies that are used to establish new small businesses.

“The pumps make it possible for farmers to irrigate year round, which reduced dependence on seasonal rainfalls. Producing food year round enables farmers to move from subsistence farming to commercial farming and also allows them to capture higher crop prices during the dry season,” said the trial’s co-primary investigator, Craig R. Cohen, MD, MPH, UCSF professor in the Bixby Center for Global Reproductive Health in the department of obstetrics, gynecology and reproductive sciences.

The third element was agricultural and financial management training. Agricultural training included practical demonstrations on sustainable farming techniques, use of the water pump, planting, soil and water conservation, and integrated disease and pest management. Financial training focused on record keeping, along with savings and investments.

“Shamba Maisha is the first trial to link agriculture with HIV outcomes,” Cohen said. “The intervention is unique in that it is sustainable, transformative and empowering.  If you were to take away our involvement tomorrow, the knowledge and materials to continue the livelihood intervention would still exist in the community.” 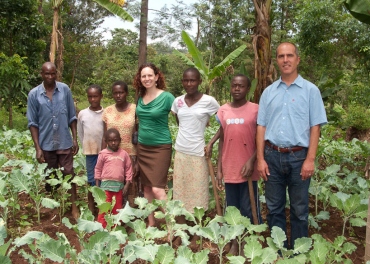 In addition, this work was supported by the UC Global Health Institute (UCGHI) Center of Expertise in Women’s Health & Empowerment that strives to promote justice, equity and scientific advances to reduce gender and health disparities globally. Through innovative research, education and international collaboration, the Center builds and strengthens the capacity of the next generation of leaders in women’s health and empowerment.

UCSF researchers are affiliated with the AIDS Research Institute (ARI) at UCSF, which houses hundreds of scientists and dozens of programs throughout UCSF and affiliated labs and institutions, making ARI one of the largest AIDS research entities in the world.  UCSF ranks #1 among medical schools in the U.S. for its AIDS programs according to US News & World Report, as it has every year since the category was created in 2001.