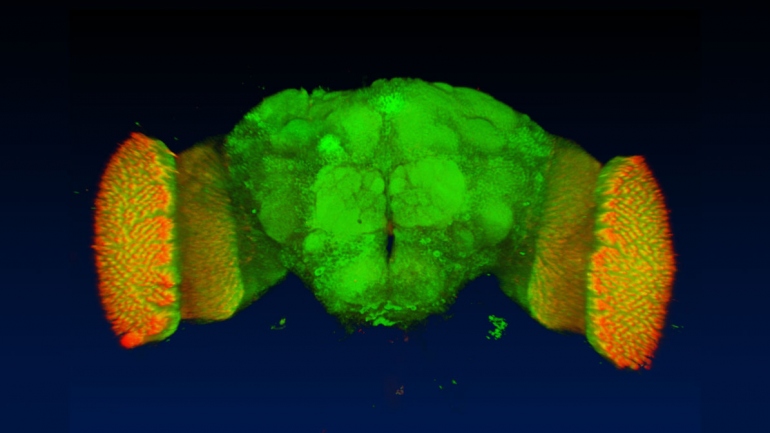 Think the rat’s nest of cables under your desk is bad? Try keeping the trillions of connections crisscrossing your brain organized and free of tangles. A new study coauthored by researchers at UC San Francisco and the Freie Universität Berlin reveals this seemingly intractable job may be simpler than it appears.

The researchers used high-resolution time-lapse imaging of the developing brains of pupal fruit flies (Drosophila melanogaster) paired with mathematical simulations to unravel a trick of neural wiring that had stumped neuroscientists for decades. They discovered three simple rules that may explain how the complicated visual system of the humble fruit fly – with its eight-hundred-lens compound eyes – self-organizes as it grows. The authors said a similar approach could one day help us understand the rules governing the development of our own, much more complex brains.

The paper, titled, “The Developmental Rules of Neural Superposition in Drosophila,” appears online June 25 ahead of print in the July 2 issue of the journal Cell. 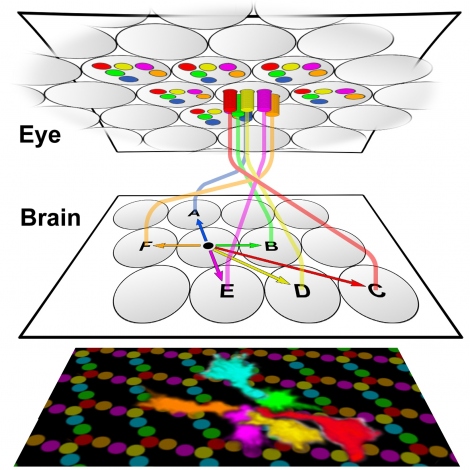 A fruit fly’s compound eye contains 800 prism-like facets whose six distinct photoreceptor cells capture light coming in from different angles in space. These signals must all find their way to different spots in the fly brain’s visual map of the world. On the other hand, light from a single point in space is captured by photoreceptors living in multiple neighboring facets of the compound eye, and axons carrying signals from these different facets must find one another by the time they reach the brain. Researchers from UCSF and the Freie Universität Berlin have discovered a simple program the fruit-fly brain uses to wire this complex circuit. Credit: Langen et al. / Cell 2015

The new discovery began as a collaboration among three co-senior authors: Lani Wu, PhD, and Steven Altschuler, PhD, professors of pharmaceutical chemistry at the UCSF School of Pharmacy, and Peter Robin Hiesinger, PhD, professor of neurobiology at Freie Universität Berlin and the NeuroCure Cluster of Excellence, Berlin, when the three scientists were all working at the Green Center for Systems Biology at UT Southwestern Medical Center in Dallas.

Brain wiring is complex, and the molecular and genetic instructions that make it so are just as complex, said Altschuler. But at least in this case, he said, it turns out that somewhere in the middle “there’s a level of description that is simple enough that you can literally write simple software code to implement it.”

The fundamental discovery of the new paper is that the seemingly complex neural circuit connecting the fly’s compound eye to its brain can be wired by following three simple, pre-programmed rules.

This discovery “gives us hope that maybe one day we can really understand other complex biological systems in terms of simple rules,” said Wu.

Tracking the Development of the Fly Visual System

The researchers used high-resolution 2-photon imaging, which uses precisely focused lasers to let scientists peer deep into living tissue, to track the development of the visual system for 25 hours during fly pupal development. These time-lapse images quickly revealed an anatomical shift in the relationship between the Drosophila eye and brain that had never before been detected, and enabled the research team to precisely follow the biological sleight of hand as axons from the eye reached out and wired themselves into the circuitry of the fly brain.

Study lead author Marion Langen, PhD, a post-doctoral researcher in the Altschuler and Wu laboratory, remembers thinking “Nobody has observed this before? How is that possible?” she said. “That’s when it became really fun.”

These new biological insights enabled Altschuler and Wu to build simulations to explain the process. It was a process of gradual refinement, Altschuler said, but over three years new insights from the imaging data and mathematical models started to converge on a surprisingly simple algorithm.

Neurobiologists have long studied the fruit fly brain as a relatively simple system where the rules of wiring may be easier to work out than in the human. But even the fly brain requires remarkable feats of biological engineering to build itself from scratch.

The team of researchers chose to tackle a particularly thorny wiring problem called “neural superposition,” which has to do with how the fly’s compound eye wires itself up to the brain. The fruit fly eye is composed of 800 facets, called ommatidia, each of which acts like a tiny eye. Behind the lens of each facet is a ring of light-sensitive cells (photoreceptors) that captures light from a small region of the fly’s visual world, and send these signals down long axonal “cables” to piece together a complete visual map within the fly’s brain.

Here’s where the wiring trick starts: Just like your two eyes, neighboring facets of a fly compound eye see overlapping patches of the world. In order to avoid double vision, the human brain has to combine the overlapping visual information from our two eyes. In fruit flies this has to happen 800 times – for each eye.

Imagine plugging 800 different monitors, keyboards, routers and the like, each with six different cables, into 800 different computers, and you may start to grasp the challenge of getting this wiring problem right. In fact, depending on how you count, there could be something like half a million different ways it could go wrong, Altschuler said. The question of how the brain of a developing fruit fly pupa does it in 20 hours with almost perfect accuracy has puzzled neuroscientists for decades.

The problem, Altschuler said, is that in the past “they could not watch it unfold live. They had no way to visualize the process and reason about it mathematically.”

Hiesinger is an expert in high-resolution brain imaging, and had long been fascinated by the superposition problem.

"The question of how to wire a brain has driven my research since graduate school,” he said. In previous research, Hiesinger has demonstrated that the fly visual system is “a model for how a complicated neural circuit can be genetically hard-wired.” The new paper, he said, “for the first time really revealed the developmental algorithm that executes this genetic code."

The researchers discovered that rather than solving a difficult 3d braiding problem, developing axons from the eye can find their targets by following three simple steps:

The new findings support Wu, Altschuler and Hiesinger’s intuition that many apparently complex systems in biology are the product of a simple set of developmental rules. This isn’t a new idea – it was one of the reasons the fly eye was chosen as a model system for more complex brains back in the 1960s and 70s, Altschuler said. But with the biological community’s present focus on mapping convoluted neural circuitry and testing complex genetic interactions, “our approach is currently a bit countercultural,” he said.

Brain wiring is complex and the molecular and genetic instructions that make it so are almost equally complex, Altschuler said. “It’s not obvious that all systems in biology will have at their heart a simple explanation,” he said. But perhaps many complex systems just await the right combination of observation and computation to crack the code.

The researchers are now conducting a more thorough search of all the possible algorithms growth cones might use to get to the right spot. They also hope to bring their combination of high-resolution imaging and computation to identify simple developmental algorithms in higher animals, such as the visual system of the mouse.

The other co-authors were co-lead author Egemen Agi of Freie Universität Berlin and the NeuroCure Cluster of Excellence, Berlin and Altschuler and Wu’s son Dylan Altschuler, now an undergraduate at Princeton University, who was 16 years old when he contributed to the research.