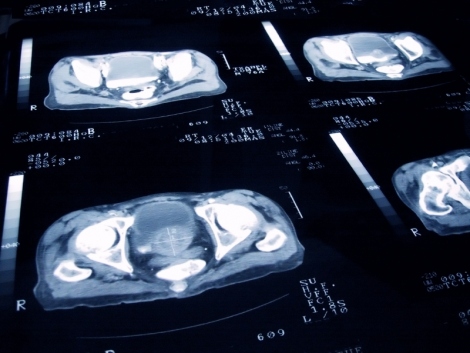 Men with an elevated, genetically inherited risk for prostate cancer could be routinely identified with a simple blood or urine test, scientists at UC San Francisco and Kaiser Permanente Northern California have concluded, potentially paving the way to better or earlier diagnosis.

The study, which compared 7,783 men with prostate cancer to 38,595 men without the disease, is available online and will be published in an upcoming issue of the journal Cancer Discovery.

The new study is one of the first to come out of the collaboration between UCSF and Kaiser Permanente Research Program on Genes, Environment, and Health (RPGEH), which analyzed genetic samples and health records from more than 100,000 volunteers, making it one of the largest research projects in the United States to examine the genetic, health and environmental factors that influence common diseases such as prostate cancer.

“We developed a risk model that may have clinical value,” said John Witte, PhD, a UCSF professor of epidemiology and biostatistics and of urology, who led the study along with Stephen Van Den Eeden, PhD, at Kaiser Permanente. “We also showed that there remain substantial undiscovered genetic risk factors for prostate cancer.”

Men ranked in the highest percentiles for risk in the study have a prostate cancer risk comparable to the breast cancer risk among women who carry a mutation in one of the so-called breast cancer genes, BRCA1 or BRCA2, Witte said. While women suspected of having mutated BRCA genes can choose to undergo commercially available genetic testing, there currently is no routinely available clinical test to measure genetic risk for prostate cancer.

Screening strategies for prostate cancer are in flux. Measuring blood levels of a molecule called prostate specific antigen (PSA), followed by a biopsy for men with high PSA levels, began in the 1980s, but no longer is routinely recommended. Although cancers have been identified at earlier stages with this strategy, many prostate tumors identified with this approach never cause any harm, even without treatment.

Van Den Eeden, who is senior investigator with the Division of Research at Kaiser Permanente, emphasized that the group also is trying to identify specific genetic risk factors that, when combined with other measures such as elevated PSA, could improve diagnosis prior to any referrals for invasive biopsies, and that might also point to the most aggressive cases of cancer.

“Now we are focusing on men with prostate cancer in this cohort who relapse despite treatment, and on those initially diagnosed with the most advanced disease, with the hope of identifying inherited combinations of genetic variations associated with the most aggressive, life-threatening cancers,” Van Den Eeden said.

The Power of Data in Precision Medicine

The results point to the potential for large data sets such as this to lead to more precise diagnostics, one of several aspects of what is known as precision medicine.

Earlier twin studies from Scandinavia concluded that roughly half of prostate cancer risk is genetically determined, more than for breast cancer or colon cancer. Prostate cancer also is the most common among deadly cancers afflicting men in the United States. The disease is expected to kill more than 27,000 U.S. men this year — more than any other cancer except for lung cancer.

The researchers also identified two new risk factors that previous studies had missed, each of which is associated with a nearly 20 percent increase in prostate cancer risk. One of the newly discovered risk factors — identified by the addition of just one DNA base pair at a specific location on chromosome 6 — is found in about 30 percent of the population, yet had never been detected in previous studies of tens of thousands of men, Witte said. This single-base-pair DNA addition may affect the production of proteins believed by some scientists to be associated with prostate cancer. Such small deletions or insertions have been ignored in many studies, but Witte said that with new methods, they now can more easily be studied.

The UCSF/Kaiser Permanente research team and other research groups have been finding risk genes through genome-wide association studies. With this approach, researchers do not try to read out all the DNA comprising the genomes of thousands of individuals; for a study this big that approach is still prohibitively expensive, despite ongoing advances in gene sequencing methods. Instead, researchers use a few million genetic markers, like road signs along the length of the genome, to detect and track DNA variations among individuals that are associated with a disease diagnosis. For the Cancer Discovery study, the researchers used this previously unstudied set of patients to find DNA variations associated with prostate cancer. In so doing, they confirmed the validity of nearly all genetic risk factors for prostate cancer first identified in other studies conducted in recent years.

About 20 percent of the men studied were non-white. The researchers included DNA probes specifically designed to detect DNA variations in different minority groups, but the new risk model did not gauge prostate cancer risk as accurately in these men. This result was not surprising, the researchers said. Genetic risk factors often act differently in individuals with different genetic backgrounds, including individuals from different ethnic backgrounds. Witte said new studies focusing on minority populations are warranted. “Variants detected in particular ethnic populations may not adequately predict risk in other ethnic groups,” he said.

Collaborators include scientists from Kaiser Permanente Southern California, Harvard University, the Mayo Clinic, the University of Southern California, and the National Cancer Institute. The bulk of funding for the RPGEH and for the new research published in Cancer Discovery has come from the National Institutes or Health, The Robert Wood Johnson Foundation, The Wayne and Gladys Valley Foundation and The Ellison Medical Foundation. Kaiser Permanente has also provided financial support for the RPGEH.

The Kaiser Permanente Division of Research conducts, publishes and disseminates epidemiologic and health services research to improve the health and medical care of Kaiser Permanente members and the society at large. It seeks to understand the determinants of illness and well-being and to improve the quality and cost-effectiveness of health care. The Research Program on Genes, Environment and Health is one of the largest research projects in the United States to examine the genetic and environmental factors that influence common diseases such as heart disease, cancer, diabetes, high blood pressure, Alzheimer's disease, asthma and many others. For more information, visit www.dor.kaiser.org.