UC San Francisco has recruited a world-renowned expert in medical technology, Atul Butte, MD, PhD, to lead the new UCSF Institute for Computational Health Sciences, which will serve as a cornerstone of the university’s efforts to harness the power of “big data,” to lead to faster and more effective cures for patients worldwide.

A noted expert in pediatrics and medical informatics at Stanford University, Butte brings the rare combination of deep knowledge in medicine and biomedical research, and technological fluency to lead in the new realm of computational health. The appointment will be effective April 1.

The institute is a core element of UCSF’s campuswide efforts in what is known as precision medicine – a growing field that aims to take advantage of new advances in computer technology to mine the immense amounts of data being generated by biomedical research and clinical care, including vast new understanding of human genetics.

“Atul is a visionary leader working at the intersection of the technological and life sciences,” said UCSF Chancellor Sam Hawgood, MBBS. “The convergence of these disciplines will revolutionize how we envision wellness and medicine in the future. Under Atul’s leadership, our new Institute of Computational Health Sciences will position UCSF at the forefront of this revolution in health.” 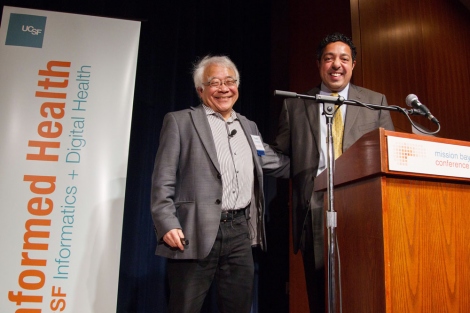 In addition to his role at UCSF, Butte also has been named executive director of clinical informatics for UC Health Sciences and Services, in which he will assist UC Senior Vice President John Stobo, MD, and other UC Health leaders in the ongoing development and implementation of a UC-wide data warehouse and analytic platform.

This type of platform and data warehouse ultimately could enable researchers to tap into the vast amount of clinical data being generated by the five medical centers in the University of California system to help advance basic research in disease, better understand which therapeutic approaches are most effective and improve care across the UC system.

Butte is currently chief of the Division of Systems Medicine and associate professor of pediatrics at Stanford University and Lucile Packard Children’s Hospital, where he has been a faculty member for the past decade. Trained in both computer science and medicine at Brown University, Butte previously worked as a software engineer at Apple Inc. and Microsoft Corp., and received his PhD in Health Sciences and Technology from Harvard Medical School and the Massachusetts Institute of Technology. He is also a founder of several Bay Area biotech startup companies.

Butte’s research laboratory, which is funded by grants from the National Institutes of Health and March of Dimes, focuses on building and applying computational tools to convert hundreds of trillions of points of molecular, clinical and epidemiological data collected by researchers worldwide over the past decade, now commonly known as “big data,” into new diagnostics, therapeutics and insights into both rare and common diseases.

That is the crux of precision medicine, in which UCSF has played a key role, including co-chairing the committee that authored the definitive white paper on the subject for the National Academy of Science in 2011.

The institute Butte will lead is one of the core elements of UCSF’s precision medicine platform, which provides a single, overarching strategic vision for the campus going forward. That vision brings together the knowledge gained across the continuum of biomedical research and care, from basic researchers to translational scientists, clinical practitioners and social and behavioral scientists in all four of its schools – dentistry, medicine, nursing and pharmacy – and to patients and the community.

“If we could access and integrate the enormous amount of data imbedded in that continuum, we could potentially change the ways we understand life processes, imagine therapeutics and cure and avoid disease,” said Keith Yamamoto, PhD, UCSF vice chancellor of research and a national leader in bioscience research. “If we just aggregate the data, we’d have just a pile of data. The challenge is to devise ways to analyze it, mine it and make sense of it.”

The institute, which launched under interim directors Neil Risch, PhD, and Michael Fischbach, PhD, with seed funding from the Chancellor’s office so it could co-recruit its first faculty members with other UCSF departments, will serve as a campus hub for computer scientists and for researchers who use big data and computation as critical tools in biomedical research and practice, while also serving as an educational center to train future leaders in the field.

“The idea is to build a fully inclusive institute that reflects and harnesses what’s happening in all of the schools at UCSF,” Butte said. “Of course we hope that we will be successful in making discoveries and developing diagnostics and therapeutics, which we will disseminate through publications. But we also intend to take these discoveries out of the laboratories through licensing and starting companies, when we need to.

“We especially want to take advantage of the entrepreneur spirit growing in Mission Bay,” Butte continued. “If we want to change the world of medicine, we have to bring those discoveries into the marketplace and closer to patients.”

Butte has authored nearly 200 publications and delivered hundreds of invited presentations in personalized and systems medicine, biomedical informatics, and molecular diabetes, including 20 at the National Institutes of Health or NIH-related meetings and TEDMED.

Butte’s compensation includes a base salary of $147,300, in accordance with his academic rank and program unit, for which he will be eligible for the UC Retirement Plan and other standard UC benefits. He also is eligible for an additional $332,700 in negotiated salary, which will be supported through philanthropic sources and extramural grants.