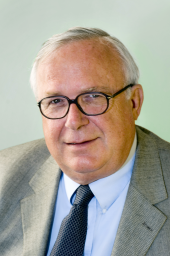 Ohio University and the National Academy of Engineering (NAE) announced today that UC San Francisco neuroscientist Michael M. Merzenich, PhD, is a winner of the 2015 Fritz J. and Dolores H. Russ Prize, the bioengineering profession’s highest honor. Merzenich shares the prize with four other scientists for their fundamental contributions to the development of cochlear implants, electrical devices that enable the deaf to hear.

The cochlear implant is the most-used neural prosthesis developed to date; more than 320,000 hearing-impaired people have received implants in one or both ears.

“This year’s Russ Prize recipients personify how engineering transforms the health and happiness of people across the globe,” said NAE President C.D. Mote, Jr. “The creators of the cochlear implant have improved remarkably the lives of people everywhere who are hearing impaired.”

Cochlear implants are electronic devices that allow people with severe to profound sensorineural hearing loss to hear sounds. In such implants, an externally worn audio processor detects sounds and encodes them into electrical signals that are transmitted to small, surgically implanted components that directly simulate the auditory nerve. The auditory nerve sends the signals to the brain, where they are interpreted as sounds.

Merzenich, professor emeritus of otolaryngology-head and neck surgery at UCSF, established some of the neurophysiological underpinnings of present cochlear implant designs beginning in the early 1970s. In collaboration with two UCSF colleagues, the late Robin P. Michelson, MD, and Robert A. Schindler, MD, professor emeritus of otolaryngology, Merzenich later conducted one of the first clinical trials of multichannel cochlear implants. These trials paved the way for the eventual commercialization of UCSF-designed devices in the late 1980s by Advanced Bionics, still one of the world’s leading manufacturers of cochlear implants.

“I am very, very pleased that the cochlear implant has been recognized as a significant advancement that contributes positively to the quality of life of those with hearing impairment,” said Dennis Irwin, PhD, dean of Ohio University’s Russ College of Engineering and Technology. “I have had the privilege of knowing and working with several individuals with profound hearing loss throughout my early life and later career, and I witnessed the difficulty several of them faced in athletic pursuits, education and their careers.”

Created by Ohio University alumnus Fritz Russ, a 1942 electrical engineering graduate, and his wife, Dolores, the Russ Prize, which carries a $500,000 award, recognizes a bioengineering achievement that has significantly improved the human condition. Awarded biennially by the NAE, the prize recognizes bioengineering achievements worldwide that are in widespread use and have improved the human condition. Previous recipients include the inventors of the implantable heart pacemaker, kidney dialysis, the automated DNA sequencer and the technology enabling LASIK and PRK eye surgeries.

Founded in 1964, the NAE is a private, independent, nonprofit institution that provides engineering leadership in service to the nation. The mission of the NAE is to advance the well-being of the nation by promoting a vibrant engineering profession and by marshaling the expertise and insights of eminent engineers to provide independent advice to the federal government on matters involving engineering and technology.