It was June 1981 when a UC San Francisco nurse educator first heard of an unusual cancer that was being called Kaposi’s sarcoma. Angie Lewis was at a conference of Bay Area Physicians for Human Rights when she learned about this disease that seemed to be striking gay men in large urban settings.

Lewis and others began studying the illness and how to care for patients suffering from it. San Francisco – and UCSF – became a hub for research and patient care for what would soon become known as HIV/AIDS.

In early 1983, UCSF partnered with the San Francisco Department of Public Health to create the first outpatient clinic devoted to caring for people with AIDS. Six months later, the hospital started the first dedicated inpatient AIDS unit in the nation, known as Ward 5B, which was largely nurse-led. 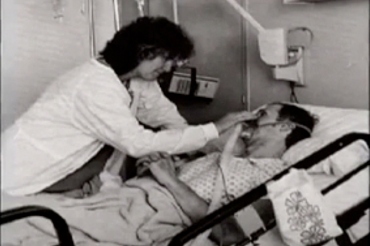 A mix of stigma, fear and homophobia kept some health care providers away from working with patients with HIV/AIDS. For others, the call to care was deep and personal.

“Many of my gay male friends from the 1980s and pretty much my whole cohort from college is dead. It was so much a part of my life, I didn’t think I could do anything else,” said Carol Dawson-Rose, who coordinates the School of Nursing’s Master’s specialty in advanced practice public health nursing.

Nurses played a crucial role in caring for HIV/AIDS patients, providing comfort, symptom management, and often, in the early days of the disease, palliative care for those who were dying. Psychiatric nurses also attended to HIV/AIDS patients, many of whom were scared and extremely ill. This patient-centered care approach became known as the “San Francisco Model,” and informed many of the team-based approaches to care that still exist today.

From the earliest days of the epidemic through advances that have transformed HIV infection from a death sentence into a manageable chronic condition, UCSF nurses and nurse scientists have played a critical role in crafting and improving HIV/AIDS care – and changing all of nursing in the process.

Read the full story in Science of Caring magazine about those who began this movement of care and continue to work in HIV/AIDS.