The variant, a difference in just one of the three billion “letters” in the human genome known as a single-nucleotide polymorphism (SNP), originates from indigenous Americans and confers significant protection from breast cancer, particularly the more aggressive estrogen receptor–negative forms of the disease, which generally have a worse prognosis. 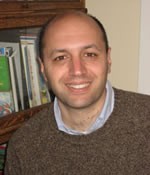 “The effect is quite significant,” said Elad Ziv, MD, professor of medicine and senior author of the study. “If you have one copy of this variant, which is the case for approximately 20 percent of U.S. Latinas, you are about 40 percent less likely to have breast cancer. If you have two copies, which occurs in approximately 1 percent of the US Latina population, the reduction in risk is on the order of 80 percent.”

Published in the October 20, 2014 issue of Nature Communications, the new study showed that women who carry the variant have breast tissue that appears less dense on mammograms. High “mammographic density” is a known risk factor for breast cancer.

“We have detected something that is definitely relevant to the health of Latinas, who represent a large percentage of the population in California, and of other states such as Texas,” said first author Laura Fejerman, PhD, assistant professor of medicine and a member of UCSF’s Institute of Human Genetics. “This work was done as a collaboration of multiple investigators, many of us originally from Latin America. As a Latina myself, I am gratified that there are representatives of that population directly involved in research that concerns them.”

Epidemiological data have long demonstrated that Latina women are less susceptible to breast cancer than women of other ethnicities. According to National Cancer Institute data from 2007 to 2009, whites have about a 13 percent lifetime risk of breast cancer, blacks about 11 percent, and Hispanics less than 10 percent. The lifetime risk among Hispanics with indigenous American ancestry is even lower.

For several years Fejerman and Ziv have studied Latina populations in search of genetic and biological explanations for these differences. “After our earliest studies we thought there might be a genetic variant that led to increased risk in European populations,” said Ziv. “But what this latest work shows is that instead there is a protective variant in Native American and Latina populations.”

In the new study, Fejerman, Ziv, and colleagues performed successive genome-wide association analyses of datasets from the Cancer Prevention Institute of California (CPIC) and a study known as the Multiethnic Cohort. They replicated their initial findings in data from the Women’s Health Initiative study, from a study of breast cancer in Colombian women known as COLUMBUS, and from a study conducted in Mexico, ultimately incorporating DNA data from a total of 3,140 women with breast cancer and 8,184 healthy controls.

“Our breast cancer family registry has recruited and followed more than 4,000 breast cancer families. For this study, we provided cases and controls who self-identified as Latina or Hispanic,” said CPIC Senior Scientist Esther M. John, PhD, MSPH. “The DNA samples and data shared from these cases, combined with other samples from the San Francisco Bay Area, contributed to a total of 977 breast cancer cases and 722 controls that led to this important genetic discovery.”

The newly discovered SNP is on Chromosome 6, near a gene coding for an estrogen receptor known as ESR1. Fejerman and Ziv said that the biological basis of the association between the variant and reduced breast cancer risk is still not known, but their preliminary experiments indicate that the variant interferes with the action of transcription factors, proteins that regulate the expression of the ESR1 estrogen receptor.

“If we can use these results to better understand how this protects estrogen receptor-negative breast cancer, that would be interesting and important,” Ziv said, “because right now we have no good way to prevent that type of breast cancer.”

Fejerman and Ziv are working to identify additional risk variants in Latinas and to combine these variants into predictive risk models for US Latinas. They are also collaborating with UCSF colleagues Laura J. Esserman, MD, MBA, professor of medicine, and Laura J. van ’t Veer, PhD, professor of medicine, on large-scale initiatives, still in the design state, to introduce testing for variants such as the newly identified SNP as part of breast cancer screening.

The study was funded by grants from the National Cancer Institute.

UCSF is the nation’s leading university exclusively focused on health. Now celebrating the 150th anniversary of its founding as a medical college, UCSF is dedicated to transforming health worldwide through advanced biomedical research, graduate-level education in the life sciences and health professions, and excellence in patient care. It includes top-ranked graduate schools of dentistry, medicine, nursing and pharmacy; a graduate division with world-renowned programs in the biological sciences; a preeminent biomedical research enterprise; and top-tier hospitals, UCSF Medical Center and UCSF Benioff Children’s Hospitals.