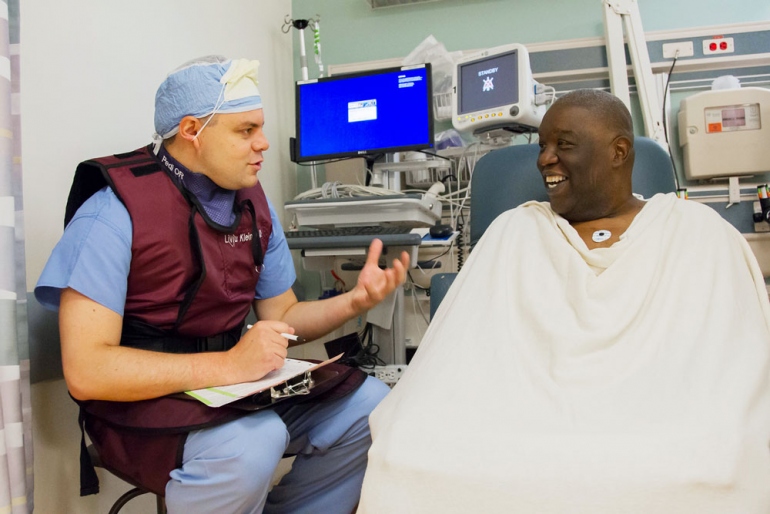 You name the disorder, and Norman Marigney of Santa Rosa may have it. In fact, he’s been hospitalized four times in the past year for heart failure, which affects about 5.5 million Americans, according to the American Heart Association (AHA).

For the 58-year-old former store manager and cook by trade, these existing conditions make monitoring his cardiac health critical. 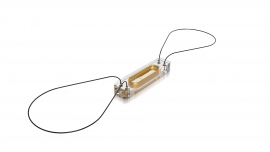 The body of the CardioMEMS implantable device is about the size of a dime.

That’s where the miniature wireless CardioMEMS HF System implant comes in. UCSF is the first medical center in the western United States to offer this innovative device, which enables patients like Marigney to be monitored daily in the comfort of their own home.

After three consultation visits at UCSF, Marigney was chosen as the first to receive the CardioMEMS implant. His non-surgical procedure was performed on Sept. 24 by Liviu Klein, MD, MS, assistant professor of cardiology and director of the Mechanical Circulatory Support and Heart Failure Device Program at UCSF.

“They told me I was the first patient here at UCSF to undergo this procedure,” Marigney said. “I was nervous the night before but was excited the morning of. I’m just happy to have been chosen.”

Marigney remained in the hospital for a couple of weeks so the initial procedure could be closely monitored, but many patients can be discharged within a day or two.

“I think this technology will open a new era in the management of heart failure patients where we will deliver more precise recommendations for their treatment based on hemodynamic data obtained in the comfort of their home,” Klein said.

Approved in late May by the U.S. Food and Drug Administration, the CardioMEMS HF System is a battery-free implantable sensor/monitor smaller than a dime. A catheter delivery system deploys the sensor permanently within the distal pulmonary artery.

Once the patient returns home, heart rates and artery pressures are monitored daily by a portable electronic unit and special pillow containing an antenna. The resulting data is transmitted in real time to a secure database at the hospital or clinic for review by a physician or nurse. 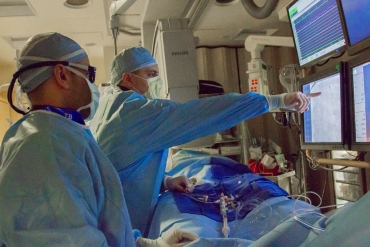 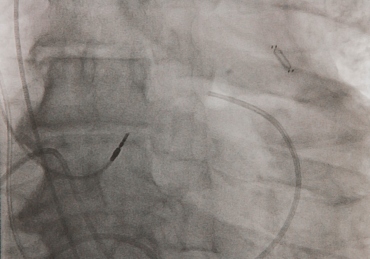 A screenshot after the procedure shows the sensor (in the upper right corner) deployed in the pulmonary artery.

Increased artery pressures occur before weight and blood pressure changes, which are often used an indirect measures of worsening heart failure. If an abnormality is detected, changes can be made to the patient’s medical therapy, thereby reducing hospitalization time.

Current standards for monitoring heart failure include patient self-monitoring with blood pressure cuffs and electronic scales, in-clinic devices during office visits, and implantable devices. Research has found that self and in-clinic monitoring have poor sensitivity to detecting subtle heart failure changes, resulting in increased hospital admissions. The AHA reports the estimated direct and indirect costs of heart failure in America was $31 billion in 2012 and expected to increase to $70 billion in 2030.

“We know that most hospitalizations for heart failure occur as a result of elevated pulmonary artery pressures,” Klein said. “Being able to monitor and assess these pressures daily, in the patient’s home, will help in decreasing the chance of being admitted to the hospital with heart failure.”

While at Northwestern University, Klein was an investigator in the CardioMEMS-sponsored CHAMPION (CardioMEMS Heart Sensor Allows Monitoring of Pressure to Improve Outcomes in NYHA Class III Patients) Trial, which studied the system’s effectiveness in certain heart failure patients who had been hospitalized for heart disease in the previous 12 months. Trial results published in The Lancet in 2011 showed a 28 percent reduction in the rate of heart failure hospitalizations at six months and a 37 percent reduction in hospitalizations during an average follow-up duration of 15 months.

Marigney did not participate in the trial, but he’s thankful for the miniature implant that allows him to enjoy simple everyday things like walking.

“It’s great to be able to do the monitoring at home,” said Marigney, a former broadcast journalist. “It saves me a lot of money, too.”