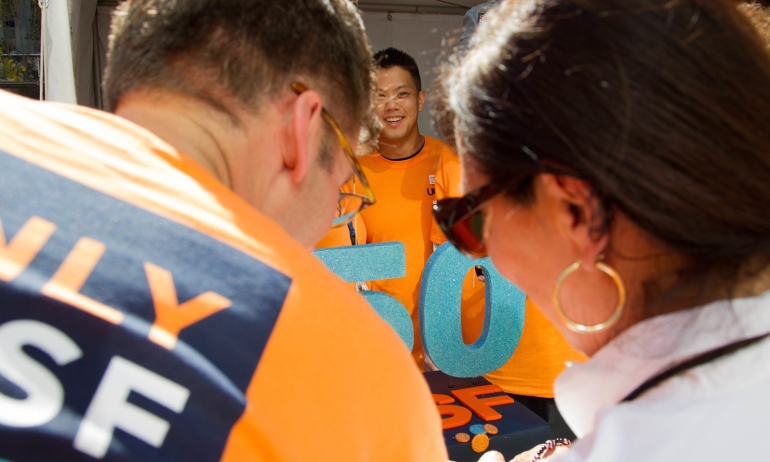 UC San Francisco Mission Bay was a sparsely populated campus when three retail partners decided to set up shop back in 2007. Before Subway, Café Terzetto and Peasant Pie opened their doors, the only place to eat on campus was Café 24 at Genentech Hall.

“And my small team was thinking how we can celebrate this milestone. And we came up with the idea of a block party,” said Jennifer Dowd, retail services manager for Campus Life Services, and organizer of the Mission Bay Block Party 8 event. “We loved the idea of having community-related booths – not just UCSF departments but community neighbors as well – and bringing people together to celebrate growth at UCSF Mission Bay.”

The first year’s Block Party attracted close to a thousand people. Every year, it has grown by at least several hundred attendees. This year’s event held on Oct. 8 drew 4,000 people from UCSF and the surrounding Dogpatch and Potrero Hill neighborhoods. 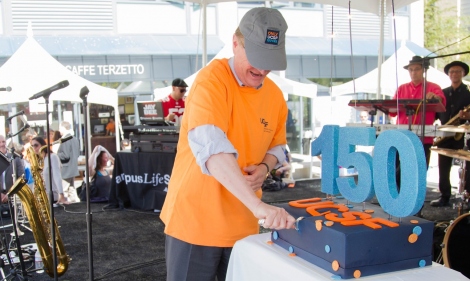 Chancellor Sam Hawgood cuts the 150th Anniversary cake at Mission Bay Block Party 8, which was designed to be a fun and festive celebration of UCSF's history. Photo by Susan Merrell

“It was an overwhelming success, the biggest campus celebration at Mission Bay that we’ve ever had since we started here 11 years ago,” Dowd said. “Every year it gets bigger and better, and this year it was really exciting to partner with UDAR (University Development and Alumni Relations).”

“The energy was amazing. It was festive and fun and the turn out remarkable, the largest block party to date,” said Larry Zeiber, assistant vice chancellor of external relations at UDAR, and chair of the UCSF 150th Celebration Committee. “Throughout most of the afternoon there was a line stretching around the corner for 150th mementos. And staff members – not only at Mission Bay but from other campuses as well – made the effort to join in the celebration.” 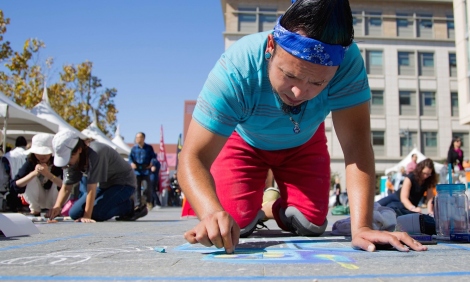 Artist Isael Isaac Pizano-Zamora, a hospital lab assistant in the Dental Center’s Predoctoral Clinic, won third place in the chalk drawing contest at the annual Block Party for a colorful image of a robot that he says symbolizes the future of UCSF. Photo by Susan Merrell

The first 3,000 attendees received special giveaway prizes and a $5 150th-celebratory Bear Hug coupon towards food at the event. And the first 300 farmers market shoppers received a commemorative reusable shopping bag.

“The Block Party is a community-building event that gets people out of their labs and offices in a fun and festive environment,” said Lisa Cisneros, senior director of strategic communications at University Relations, and a member of the UCSF 150th Celebration Committee. “When the campus started 11 years ago, there were very few places to eat, so this event was designed eight years ago to celebrate the social aspect of being at UCSF with food and entertainment.”

To commemorate the 150th anniversary, UCSF Archivist Polina Ilieva and her team set up a mini museum in a booth to display a wide-ranging collection of artifacts, including Hugh Toland’s medical box with instruments, Robert Cole’s badge as a city coroner, dental instruments and a pill machine from the collection of Bob Day, a longtime faculty member of the School of Pharmacy. The School of Nursing also was well represented with a comic book, which was dedicated to the graduating class of November 1944, and a blue nursing uniform dating back to the 1930s.

New to the block party this year was an authentic Wells Fargo Stagecoach, which was used in the Old West as far back as 1852 to transport customers’ goods. It last made an appearance at UCSF in 1989 during its 125th anniversary celebration. 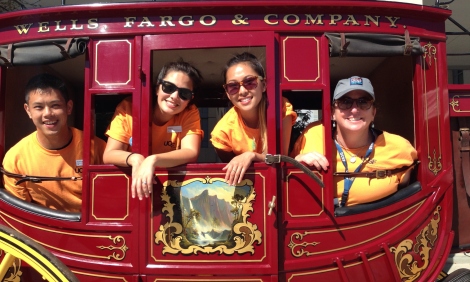 Organizers say having the Wells Fargo Stagecoach return for UCSF’s 150th anniversary is apropos since pioneering physician Hugh Toland, who founded the medical college that eventually became UCSF, used stagecoaches to carry medicines and expert advice to his patients throughout California.

“Not only was the Block Party a great opportunity to highlight our history, it also gave us an opportunity to imagine our future,” said Zeiber. “The theme of the chalk art competition was, ‘What will UCSF look like in another 150 years?’ The artwork was truly amazing.”

The UCSF 150th Celebration Committee comprised of members who represented various departments, groups, schools and teams. Their goal is to learn from past events and improve on their success. 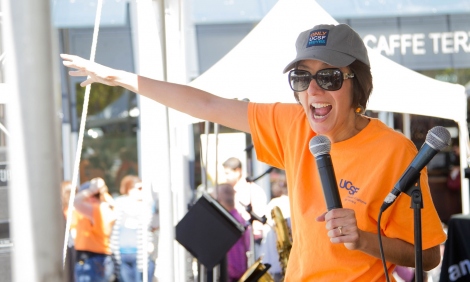 “We make it as collaborative as possible and bring people out from different areas,” said Dowd. “The planning committee is truly amazing and their dedication came through in the feedback we received. So many people came up to me to say, ‘Wow! This is really awesome!’”

Organizers say this event underscores the importance of collaboration.

“Reaching across departmental boundaries ensures a diversity of perspectives and that – for an event of this nature – all constituent groups are considered,” Zeiber said. “Collaboration results in a stronger, more impactful, final product but also new friendships are forged, contributing to the sense of community here at UCSF.”

Mission Bay Block Party 8 was one of two campus celebrations designed to unite the UCSF community for the 150th anniversary milestone during the academic year. An event, similar in nature, will take place at the Parnassus campus in spring 2015. 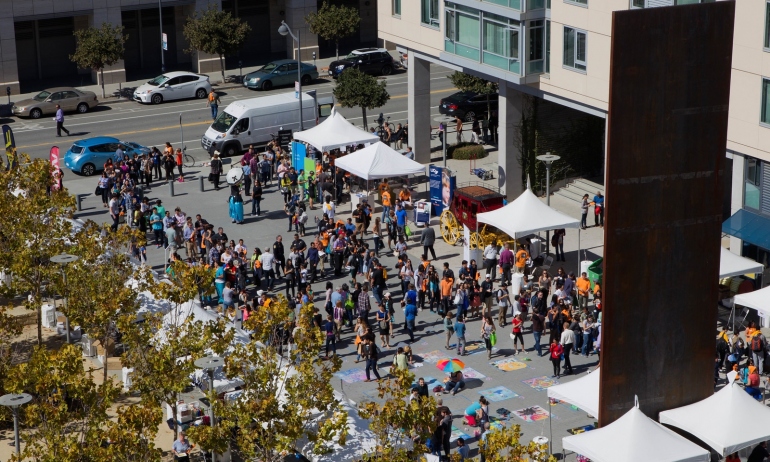 Approximately 4,000 people who work or study at UCSF or live in the surrounding Dogpath and Potrero Hill neighborhoods made their way to the UCSF Mission Bay campus for Mission Bay Block Party 8. Photo by Susan Merrell