It sounds like science fiction, but it seems that bacteria within us – which greatly outnumber our own cells – may very well be affecting both our cravings and moods to get us to eat what they want, and often are driving us toward obesity.

In an article published this week in the journal BioEssays, researchers from UC San Francisco, Arizona State University and University of New Mexico concluded from a review of the recent scientific literature that microbes influence human eating behavior and dietary choices to favor consumption of the particular nutrients they grow best on, rather than simply passively living off whatever nutrients we choose to send their way.

A Power Struggle Inside the Gut

Bacterial species vary in the nutrients they need. Some prefer fat, and others sugar, for instance. But they not only vie with each other for food and to retain a niche within their ecosystem – our digestive tracts – they also often have different aims than we do when it comes to our own actions, according to senior author Athena Aktipis, PhD, co-founder of the Center for Evolution and Cancer with the Helen Diller Family Comprehensive Cancer Center at UCSF. 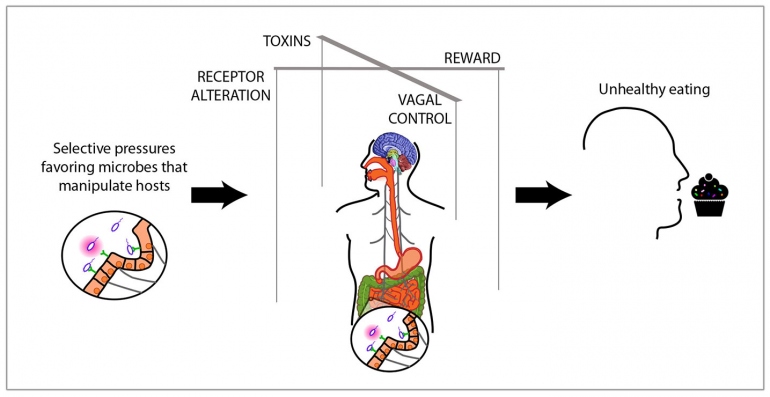 Are we at the mercy of our gut bacteria? The above image illustrates how microbes can "pull our strings," driving us to crave foods that give them the nutrients they need, including fat and sugar.

While it is unclear exactly how this occurs, the authors believe this diverse community of microbes, collectively known as the gut microbiome, may influence our decisions by releasing signaling molecules into our gut. Because the gut is linked to the immune system, the endocrine system and the nervous system, those signals could influence our physiologic and behavioral responses.

“Bacteria within the gut are manipulative,” said Carlo Maley, PhD, director of the UCSF Center for Evolution and Cancer and corresponding author on the paper. “There is a diversity of interests represented in the microbiome, some aligned with our own dietary goals, and others not.”

Fortunately, it’s a two-way street. We can influence the compatibility of these microscopic, single-celled houseguests by deliberating altering what we ingest, Maley said, with measurable changes in the microbiome within 24 hours of diet change.

“Our diets have a huge impact on microbial populations in the gut,” Maley said. “It’s a whole ecosystem, and it’s evolving on the time scale of minutes.”

There are even specialized bacteria that digest seaweed, found in humans in Japan, where seaweed is popular in the diet.

The Connection Between Digestive Tract and Brain

Research suggests that gut bacteria may be affecting our eating decisions in part by acting through the vagus nerve, which connects 100 million nerve cells from the digestive tract to the base of the brain.

“Microbes have the capacity to manipulate behavior and mood through altering the neural signals in the vagus nerve, changing taste receptors, producing toxins to make us feel bad, and releasing chemical rewards to make us feel good,” said Aktipis, who is currently in the Arizona State University Department of Psychology.

In mice, certain strains of bacteria increase anxious behavior. In humans, one clinical trial found that drinking a probiotic containing Lactobacillus casei improved mood in those who were feeling the lowest.

Maley, Aktipis and first author Joe Alcock, MD, from the Department of Emergency Medicine at the University of New Mexico, proposed further research to test the sway microbes hold over us. For example, would transplantation into the gut of the bacteria requiring a nutrient from seaweed lead the human host to eat more seaweed?

The speed with which the microbiome can change may be encouraging to those who seek to improve health by altering microbial populations. This may be accomplished through food and supplement choices, by ingesting specific bacterial species in the form of probiotics, or by killing targeted species with antibiotics. Optimizing the balance of power among bacterial species in our gut might allow us to lead less obese and healthier lives, according to the authors.

“Because microbiota are easily manipulatable by prebiotics, probiotics, antibiotics, fecal transplants, and dietary changes, altering our microbiota offers a tractable approach to otherwise intractable problems of obesity and unhealthy eating,” the authors wrote.

Implications for Obesity, Diabetes and even Cancer

The authors met and first discussed the ideas in the BioEssays paper at a summer school conference on evolutionary medicine two years ago.

Aktipis, who is an evolutionary biologist and a psychologist, was drawn to the opportunity to investigate the complex interaction of the different fitness interests of microbes and their hosts and how those play out in our daily lives. Maley, a computer scientist and evolutionary biologist, had established a career studying how tumor cells arise from normal cells and evolve over time through natural selection within the body as cancer progresses.

In fact, the evolution of tumors and of bacterial communities are linked, points out Aktipis, who said some of the bacteria that normally live within us cause stomach cancer and perhaps other cancers.

“Targeting the microbiome could open up possibilities for preventing a variety of disease from obesity and diabetes to cancers of the gastro-intestinal tract. We are only beginning to scratch the surface of the importance of the microbiome for human health,” she said.

The co-authors’ BioEssays study was funded by the National Institutes of Health, the American Cancer Society, the Bonnie D. Addario Lung Cancer Foundation and the Institute for Advanced Study, in Berlin.