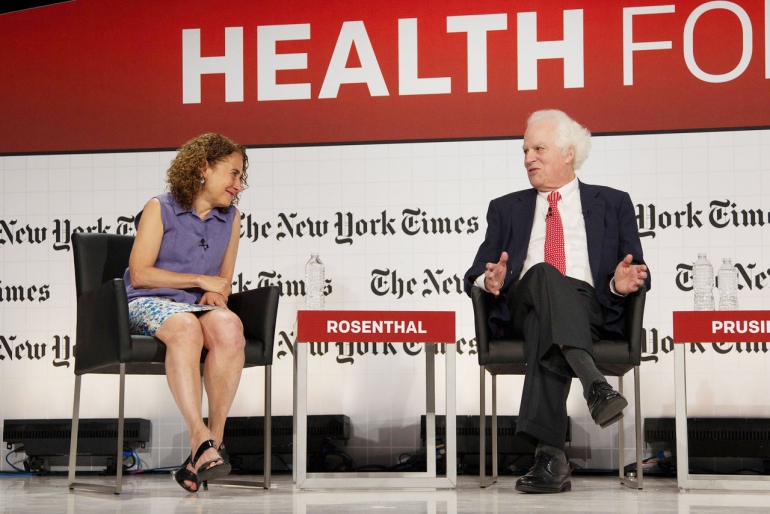 Nobel Prize winner Stanley Prusiner, MD, is not resting on his laurels.

Instead, the 72-year-old UC San Francisco neurologist has set his sights on solving one of the biggest challenges facing health care today: Alzheimer’s disease.

Prusiner made a passionate plea for tackling Alzheimer’s and other neurodegenerative diseases Thursday at the New York Times Health for Tomorrow conference at UCSF Mission Bay Conference Center. The conference, which featured experts from the University of California and across the country, addressed the changing landscape of health care.

Alzheimer’s already has a large impact on health care: It’s the sixth-leading cause of death in the U.S. — more than breast cancer and prostate cancer combined — and nearly half of people age 85 and older have the disease, Prusiner said. Without action, it will get worse — the prevalence of the disease is projected to triple by 2050 to as many as 16 million Americans.

“This is a huge, huge problem, and we’re not doing nearly enough,” said Prusiner, a UC San Francisco professor of neurology and director of the Institute for Neurodegenerative Diseases. “This is such an important area. There is no substitute for research. That’s going to really make a difference.”

Read the full story on the UC Newsroom website, and watch videos below of Prusiner and UCSF's Michael Fischbach, PhD, who spoke about his research into how gut bacteria can help fight disease.

► Watch more videos from the Health for Tomorrow conference.